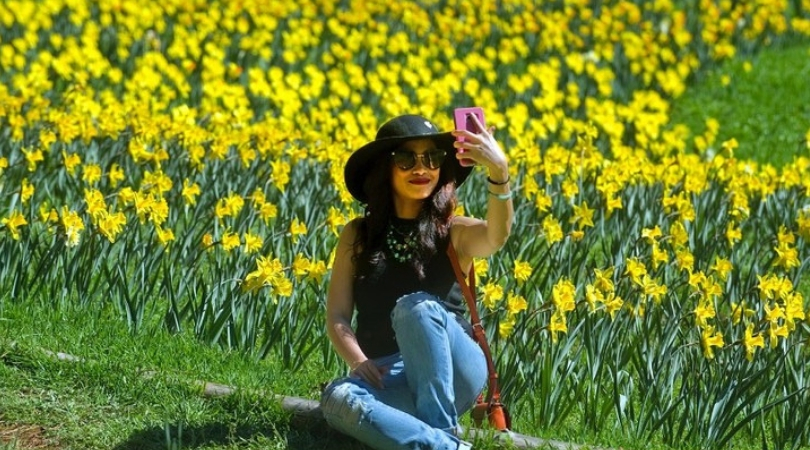 Daffodil Hill, in Volcano, California, near Sacramento, is truly a beautiful place. Unfortunately, we might not be able to visit it again. Basically, Instagrammers ruined it for all of us! Why? Because the Instagram-worthy location closed due to “unsustainable conditions” which were created by social media influencers running around wild like maniacs. You see, it’s famous for its fields of yellow and white daffodils, which makes for a great profile picture.

The picturesque location is owned by The Ryan Family for more than 80 years. As to who they are personally, that remains a mystery, but they have graciously kept up the property and cared for the daffodil bulbs, sharing the beauty with the rest of the world. Many people have traveled to see the 300,000 daffodils bloom annually at this beloved attraction in Sutter Creek. Unfortunately, that’s no longer possible.

Run-on the support and donations of the visitors, the tourist attraction was passed on to The Ryan Family from the property’s original purchasers, the McLaughlin family, who got the property in 1887. McLaughlin’s Daffodil Hill has always been free to visitors. However, as the place grew in popularity, owners started to realize that the limitations of the size of location created safety concerns for everyone involved. The parking lot, hill property infrastructure and the road system posed a threat to the attraction and its visitors.

The site had such overwhelming popularity that during the opening weekend in July of this year, there were so many cars waiting in the parking lot to get a glimpse of the hill that they didn’t have enough space to accommodate everyone! The volume of visitors had finally become too much, despite their best efforts.

Another one bites the dust. Due to the overwhelming popularity on its opening weekend. Daffodil Hill in California was forced to close indefinitely. Here is an excerpt from their @facebook page citing the reasons for the closure: "Due to the thousands of visitors on our opening weekend in 2019, the local road system to our Hill became so congested that the wait just to get to our parking area sometimes took as long as two hours. As a result, many visitors chose to park their vehicles along the narrow roadways and walk through traffic to the Hill, which was a risky endeavor in itself. In addition, these vehicles were parked illegally on the roadway, which, along with the pedestrians, would have impeded any emergency vehicles that needed to access the Hill area to assist our Shake Ridge Road neighbors, or you, our visitors." • • • #instawrecked #ruinedbythegram #destroyedbythegram #killedbythegram #influencernotwanted #notaninfluencer #daffodilhill #sacramento #california #daffodil #leavenotrace #doitforthegram #doitforthelikes #doitforthefollows

The Ryan family posted a lengthy Facebook post on July 15 announcing the closure. Yes, they decided to rip our hearts and release the devastating news that they were officially closing the business. Due to its rural locations, the Daffodil Hill was not prepared at all for the number of visitors who viciously photographed themselves all around the flower-filled fields.

It read, ?Sadly, it is this overwhelming popularity that has led us to our decision to close. After the crush of visitors that descended upon our Hill this year, we came to realize that the limitation on the size of our parking areas and the inability of the local road infrastructure to handle the volume, created liability and safety concerns for everyone involved.? In a farewell statement and closing announcement, the Ryan family thanked the visitors for supporting their family and kindly asked them to continue to appreciate mother nature any and everywhere they could.

This is not the first place to have to close due to over-tourism. Back in March 2019, Antelope Valley’s poppy “Super Bloom” also closed after visitors began to do “risky things” such as illegally landing a helicopter into the field to take pictures. You know, just the usual to get that perfect Instagram picture.

In 2018, Maya Bay, the Tai Island made popular by none other than Leonardo DiCaprio’s film “The Beach” announced it would also close indefinitely due to damage of overtourism. So, maybe there can, in fact, be too much of a good thing?