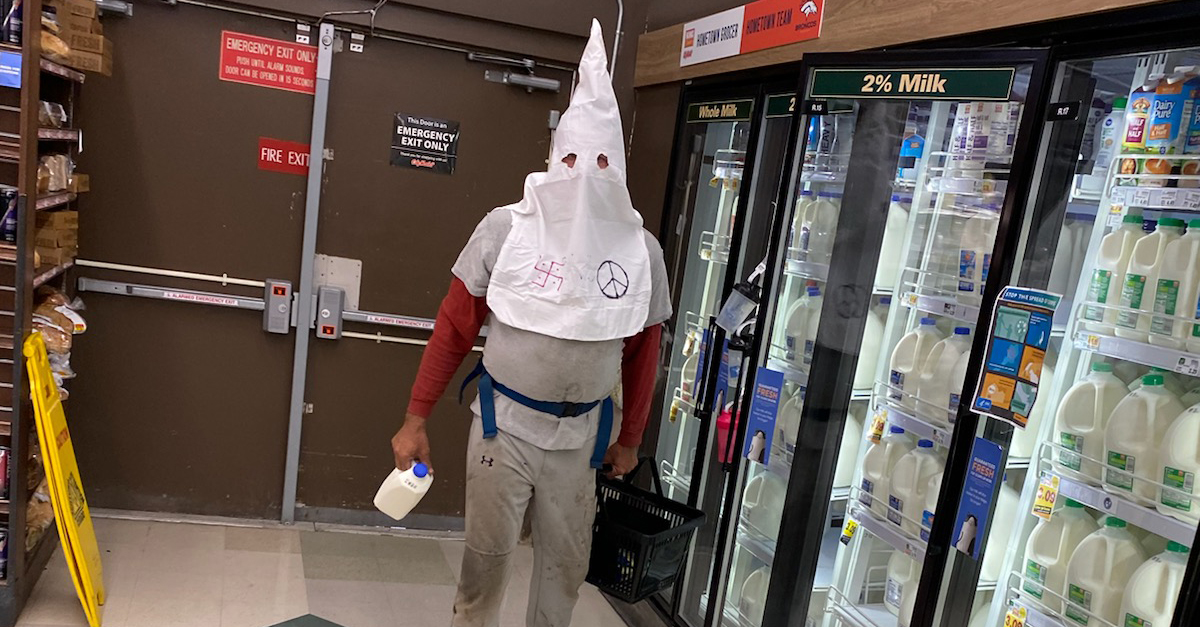 Colorado police are on the lookout for a man who wore a Ku Klux Klan hood to the store, presumably as a Coronavirus mask as well as an ill-advised form of protest and/or provocation.

The man in question wore the KKK hood into a City Market grocery store in Dillon, Colorado and proceeded to shop before being asked to leave by store employees. The man refused so employees called the police. It was only then that the man left without buying anything. Police are still working to identify the man.

The hooded man was caught on video attempting to chat up other customers in the store and eventually began arguing with both customer and employees when literally all of them were more or less like, “What the hell is wrong with you, you racist tool?”

The man’s confrontation with employees continued into the parking lot.

In response to the incident City Market released a statement reassuring its customers that they are not down with the Klan, because this is a thing that has to happen in 2020.

“At City Market, we train our associates to embrace diversity and inclusion and to show respect to every customer and one another. We ask our customers to respect these values as well when in our stores. Our store leaders are empowered to swiftly and respectfully address anyone who disregards these values, which includes blatant symbols of hate and intolerance.”

1. After all the people potentially frightened and offended by this d-hole for good reason, you really have to feel for the City Market workers. Even the executives. Everyone who has to reassure people that a) they and the store are not pro-Klan, and b) that the store is safe to shop at. A store that may well be struggling to keep sales up and keep everyone employed.

There’s no one’s week this piece of crap didn’t ruin.

2. Is there any way you could consider wearing a Klan mask in public some kind of legitimate, provocative protest about Coronavirus restrictions, or anything else, for that matter, without basically being illiterate?