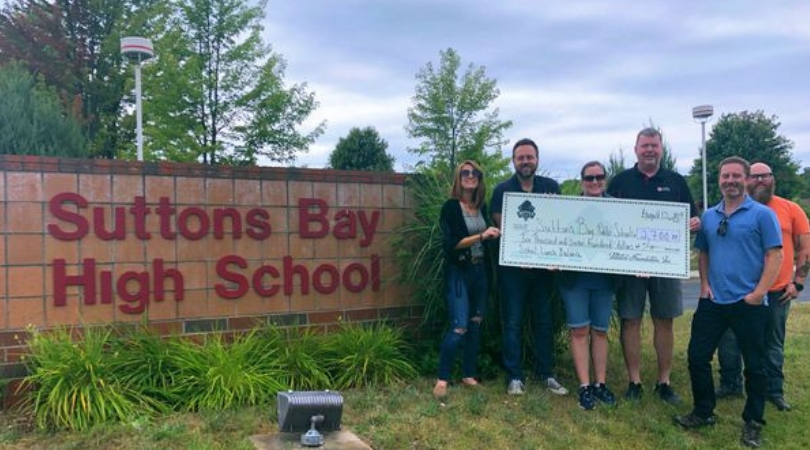 Via MLIVE
Via MLIVE

As if we needed another reason to love the wonderful makers of beer. Students at Suttons Bay Public Schools will no longer have to worry about their fall lunch debt after a generous donation was made by a Michigan brewery. The Mitten Brewing Company stated they got the idea to pay off the lunch accounts of all elementary, middle and high school students in the Northern Michigan school district after one of the bartenders suggested it.

Representatives from the Grand Rapids-based brewery, along with locations in Saugatuck and Northport, presented a whopping $2,700 check to Suttons Bay school officials on Tuesday, August 23. The school district had a total of 612 students for the 2018-19 school year. The donation is part of the company’s nonprofit branch, Mitten Foundation, INC.

Chris Andrus, one of the brewery owners, stated the brewery has been doing several charitable donations since opening in 2012 and created its own nonprofit in 2017. This time around, the brewery had trouble finding ways to use its nonprofit to give back at its Northport and Saugatuck location. That’s until Joe Symons, a bartender in Northport who also happens to be a substitute teacher at the school district, mention how many students had unpaid lunch debt.

Really a nice thing to do. I don’t think most districts would turn a kid away from eating, but for some families, it’s tough. Good job!!

Andrus stated, “We’ve been waiting for something, an opportunity to make a big gesture. Symon told us that there’s a lot of shame with kids that can’t afford it. You can’t be your best at school when you’re worried about something like that.”

According to Feeding America, children from families who are not sure where their next meal comes from, “are more likely to have lower math scores and repeat a grade.” The district, along with the school board, stated they don’t withhold hot meals from any student, but the money begins to add up over time and goes on their accounts.

So, to help out the kids in need, Andrus reached out to the school supervisor of the lunch program to find the total amount of debt owed. Then, voila, the brewery saved the day (and stomachs) of children by paying in full amount. The heroes of the town! Now if only they would only give out free beer…that would be great.