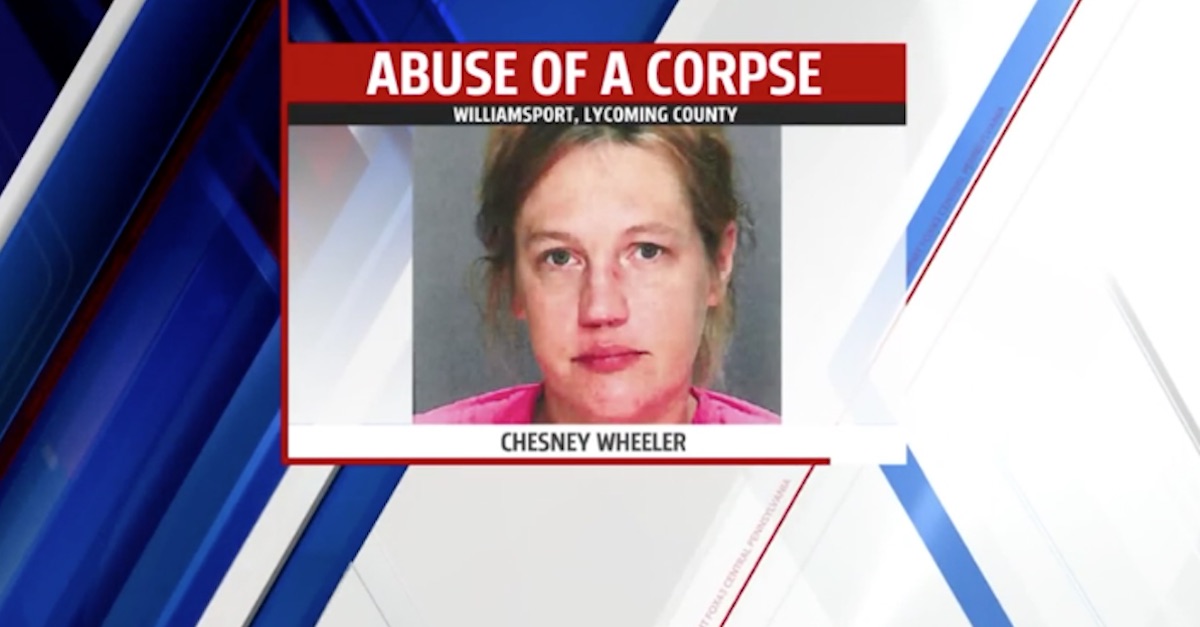 A 38-year-old woman from Pennsylvania faces charges of abuse of a corpse after the decomposing body of a prematurely born baby was discovered by police in a box in her car on the tip of a friend.

RELATED: A 10-month-old baby was found to have ingested heroin, and all eyes are on one person

Wheeler didn’t want to get caught having drugs in her system after giving birth, and so she wrapped the baby in a blanket and put her in a cardboard box that remained in her car as she received treatment at Wilkes-Barre General Hospital.

Wheeler was driven their by her friend Robin Villa.

“While Wheeler was at the hospital, she provided false information to the staff, telling them she had a miscarriage at a home in Benton and that she may have flushed the baby down the toilet,” Sgt. Detective Christopher Kriner wrote in a police report.

The staff notified police and they spoke with Villa, who pointed them to the box in Wheeler’s car.

That’s when they made the chilling discovery.

“[T]he baby was beginning to decompose, because it had been in the car for an extended period of time,” Det. Kriner said.

Wheeler admitted that she was a heroin and cocaine addict, and that she “wasn’t exactly thrilled about being pregnant, that’s the truth.”

But she also said that the baby was born dead and “stiff.”

She said she “knew the baby was dead and thought she did something wrong,” that “she wrapped the baby in a blanket” and “laid on the floor before passing out.”

Richard Wheeler, the woman’s 35-year-old husband, has been jailed since Jan. 1 on charges he assaulted her despite knowing she was pregnant. He waived a preliminary hearing on aggravated assault and other charges, has pleaded not guilty and is awaiting trial, court records show.

As PennLive reported, Richard Wheeler is accused of punching his wife “in the mouth in a neighbor’s house, grabbing her by the hair, dragging her outside, putting her into his car, driving her home and ordering her to remove her belongings.”

Chesney Wheeler said her husband kicked her in the stomach several times, knowing she was pregnant.

Wheeler faces a preliminary hearing May 10, according to online court documents which don’t list an attorney for her. She is also charged with evidence tampering, obstruction of law enforcement and fleeing prosecution.

RELATED: A former cheerleader filmed overdosing in her car says it was the best thing to ever happen to her

There may be more charges pending if the autopsy proves that drugs led to the death of the baby.