Telescopes Capture Moment of Impact During Eclipse of Moon 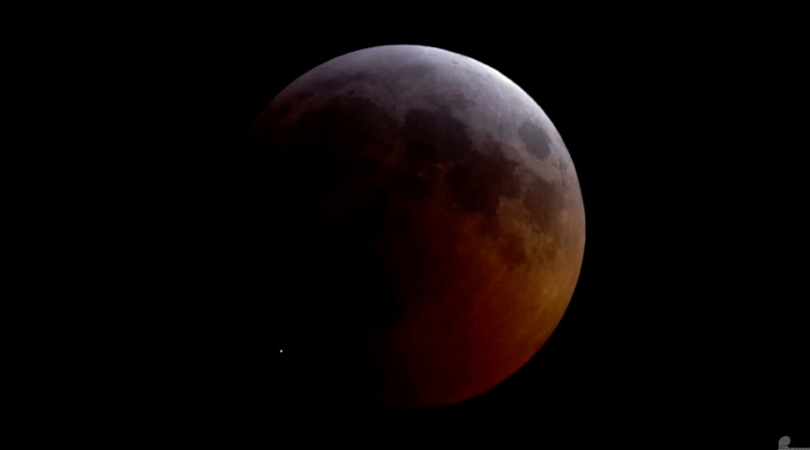 CAPE CANAVERAL, Fla. (AP) — Astronomers managed to capture the moment of an impact during this week’s eclipsed moon.

Spanish astrophysicist Jose Maria Madiedo of the University of Huelva said Wednesday it appears a rock from a comet slammed into the moon during the total lunar eclipse late Sunday and early Monday. The strike was seen by telescopes in Spain and elsewhere as a bright flash.

Madiedo said it’s the first impact flash ever seen during a lunar eclipse, although such crater-forming impacts are common. The object hit at an estimated 10 miles (17 kilometers) per second, and was 22 pounds (10 kilograms) and 12 inches (30 centimeters) across, according to Madiedo.

Griffith Observatory in Los Angeles also recorded the impact during its livestream of the eclipse. A second flash was seen a minute after the first by some observers, said Anthony Cook, an astronomical observer at Griffith.

My Supermoon shot. Not perfect but all I got. #nikon #superbloodwolfmoon #bloodmoon

“It was in the brightest part of the moon’s image,” Cook said of the second suspected strike, “and there might not be enough contrast for the flash to be visible in our video.”

Madiedo said lunar impact monitoring generally is conducted five days before and after a new moon, when flashes can be easily observed. To take advantage of the three-plus-hour eclipse, he set up four extra telescopes in addition to the four he operates at the observatory in Seville. “I did not want to miss any potential impact event,” he explained in an email. “I could not sleep for almost two days, setting up and testing the extra instruments, and performing the observation during the night of Jan. 21,” he wrote. “I was really exhausted when the eclipse was over.”

Then computer software alerted him to the impact. “I jumped out of the chair I was sitting on. I am really happy, because I think that the effort was rewarded,” he said. Moon monitoring can help scientists better predict the rate of impacts, not just at the moon but on Earth, Madiedo noted. He helps run the Moon Impacts Detection and Analysis System, or MIDAS, in Spain.