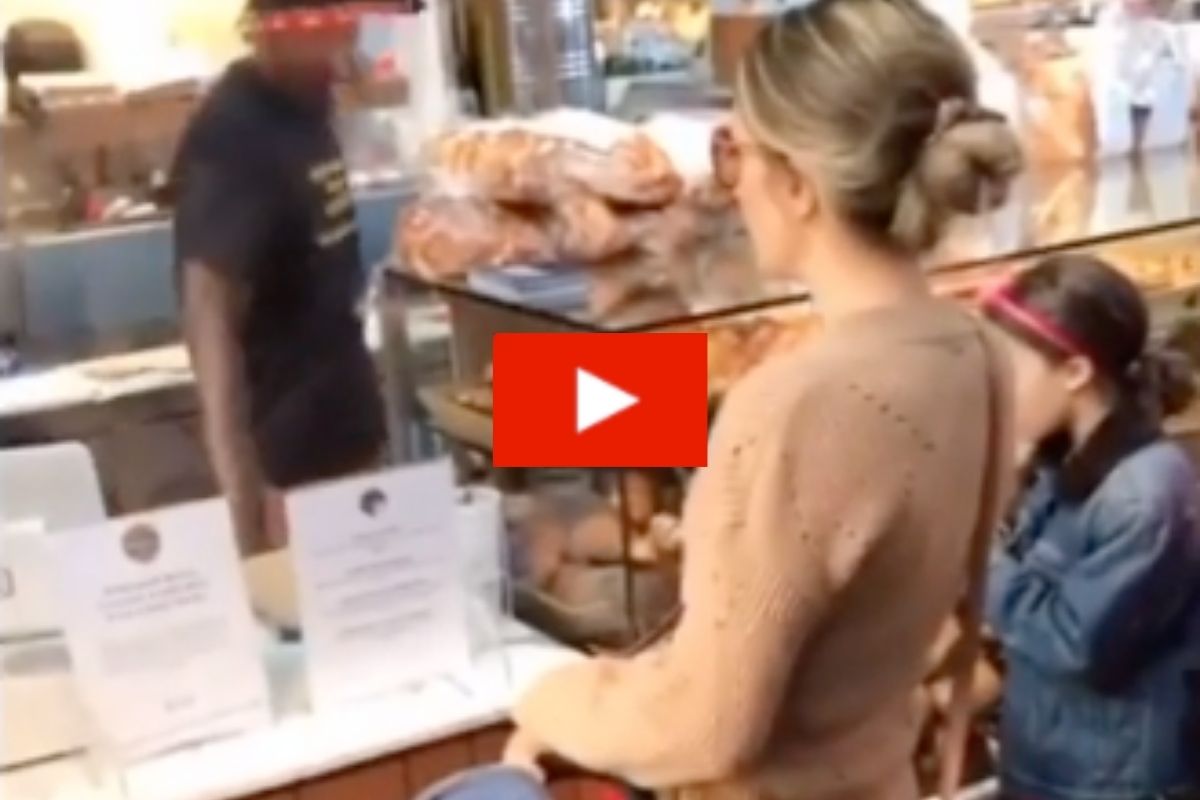 Another “Karen” is at it again, as a trending video went viral in catching a mother using racial slurs during a freakout for not getting served at a bagel restaurant because she wasn’t wearing a mask. Stephanie Denaro, a White woman, was at the Davidovich Bakery trying to order bagels, when they refused to serve her because she wasn’t wearing a mask, resulting in her using the N-word to insult the Black cashier.

In New York City, Denaro was at Davidovich Bakery attempting to order bagels with her children, including one in a stroller, in which none of them were wearing masks. In the shocking clip, we see the bakery worker politely refuse to serve her after, along with the security guard, warning her several times that she needed to put a mask on to be inside the business. The security guard asks the cashier one more time if she is going to be served at all. He confirms that she is not, resulting in the security guard telling her that she has to leave.

Denaro then responded with, “Why? Because he’s a b*tch*ss n*gg*r?”

Anti-Masker Frequently Upset for Having to Wear a Mask

You hear the bystanders all groaning in protest immediately after hearing the racial slur, but that doesn’t stop her from her rant. And one witness can be heard saying that she has a medical problem. As the security guard asks that she leaves again, she says, “That’s what he is. I can call him whatever I want.”

Denaro stood by what she said, fearlessly identifying herself in an interview with the New York Daily News, complaining about how, “they’re forcing people in New York City to wear masks,” and further revealing herself as a Trump supporter by adding, “It’s political theater. I don’t believe in COVID-19. It’s a hoax to convince people to use absentee ballots to steal the election from Donald Trump.”

When asked why she used the racial slur, she replied, “All of my children have a Black father. That’s a term I’ve heard them use all my life.”

We want to commend our employee on his handling of the sad incident which occurred at the Essex Market. As is true with…

According to the New York Post, a spokesperson for the Essex Market explained that after Denaro had left, the NYPD was called, saying, “Hate has no place in our city or in the properties that we manage,” and Davidovich Bakery praised their bakery worker on social media, saying, “We want to commend our employee on his handling of the sad incident which occurred at the Essex Market. As is true with any family an attack on one member of the family is an attack on all of us.”

I don’t have much more to say other than this woman is the absolute worst. No matter the circumstances, it’s NEVER okay to hurl racial slurs at anyone for any reason. And COVID is still a very real disease that people are dying from. She is responsible for helping spread the virus, on top of her horrible character. She needs to be held responsible accordingly.