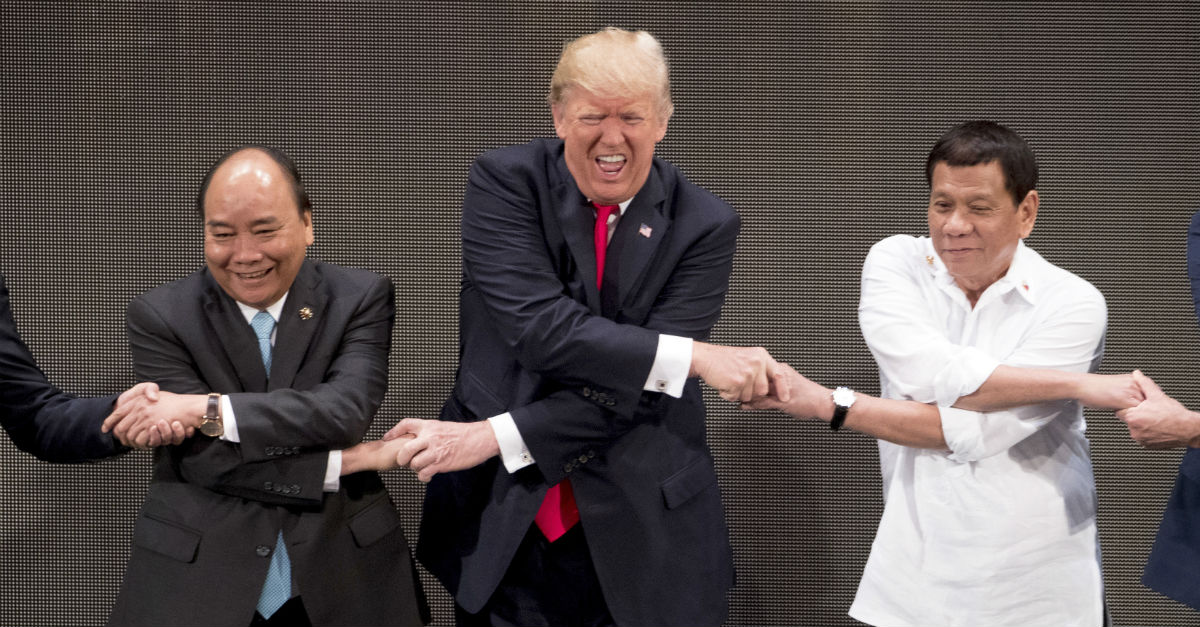 AP Photo/Andrew Harnik
CORRECTS ID TO VIETNAMESE PRIME MINISTER NGUYEN XUAN PHUC - U.S. President Donald Trump, center, reacts as he does the "ASEAN-way handshake" with Vietnamese Prime Minister Nguyen Xuan Phuc, left, and Philippine President Rodrigo Duterte on stage during the opening ceremony at the ASEAN Summit at the Cultural Center of the Philippines, Monday, Nov. 13, 2017, in Manila, Philippines. Trump initially did the handshake incorrectly. Trump is on a five-country trip through Asia traveling to Japan, South Korea, China, Vietnam and the Philippines. (AP Photo/Andrew Harnik)

While on the second leg of his foreign policy trip to Asia, a photographer, possibly incensed at the lack of press access to a meeting during the trip, tweeted a picture of President Trump in an awkward pose while at the Association of Southeast Asian Nations (ASEAN) summit in the Philippines.

Trump embraced foreign leaders in Manila in a pose known as the ASEAN “family photo,” an annual tradition. But the picture shared by Doug Mills of the New York Times made Trump look a bit oafish compared to the others around him.

.@realDonaldTrump joins other leaders in a handshake with President Rodrigo Roa Duterte, right, during the opening ceremony of the 31st ASEAN Summit pic.twitter.com/mfqTU8AmUr

David Nakamura of the Washington Post questioned why Mills and others skipped over pictures of the president looking serious to choose the sillier ones:

Critics of the media, perhaps including Trump himself, might point to Mills’s photo as evidence that the ?mainstream media? is out to undermine the president in an unfair and biased manner. Surely there were many other frames Mills could have chosen that made Trump look more distinguished. Yet Mills and other pool photographers published the awkward ones.

One might argue that the picture choice was just a coincidence.

However, Nakamura noted that Mills first voiced his frustrations on the trip by tweeting a blank space with the caption, “This what our APEC Summit photo coverage looks today in Da Nang Vietnam. Blank. No coverage by the White House Travel Pool photographers traveling with @realDonaldTrump.”

RELATED: The cheeseburger favored by Trump is now a hard-to-get dish in Japan, selling out in multiple locations