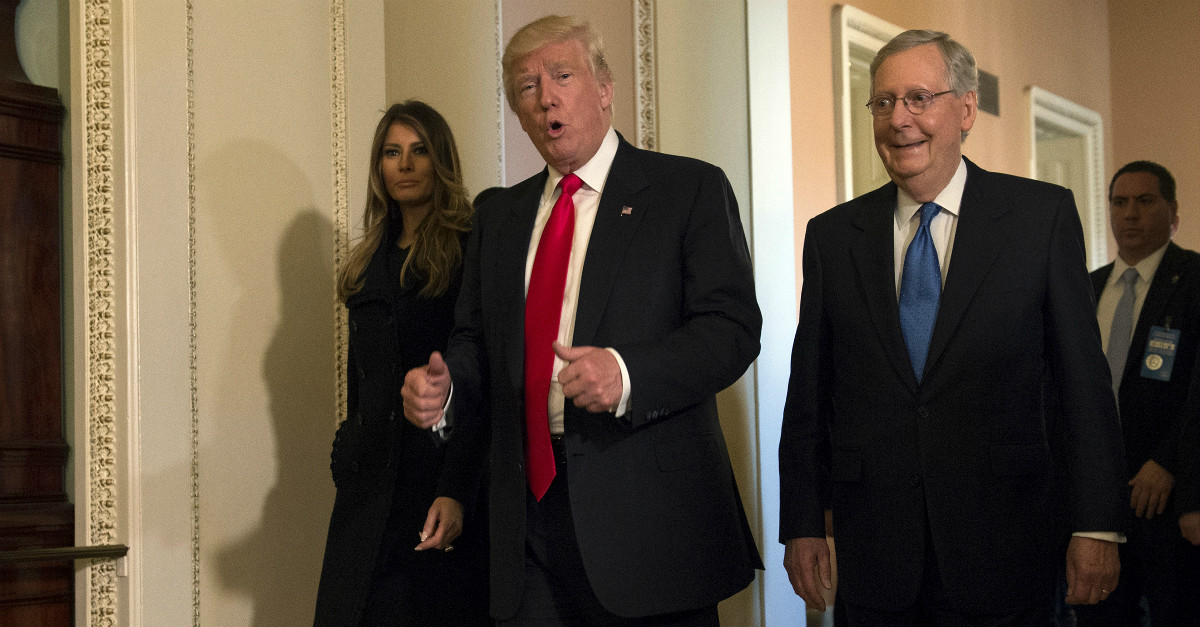 AP Photo/Molly Riley
In this Nov. 10, 2016, photo, President-elect Donald Trump, accompanied by his wife Melania, and Senate Majority Leader Mitch McConnell of Ky., gestures while walking on Capitol Hill in Washington. Washington’s new power trio consists of a bombastic billionaire, a telegenic policy wonk, and a taciturn political tactician. How well they can get along will help determine what gets done over the next four years, and whether the new president’s agenda founders or succeeds. (AP Photo/Molly Riley)

While on his working vacation, President Trump made sure to spend some time criticizing Senate Majority Leader Mitch McConnell for the failed Republican-backed health care bill.

Senator Mitch McConnell said I had "excessive expectations," but I don't think so. After 7 years of hearing Repeal & Replace, why not done?

“Senator Mitch McConnell said I had ‘excessive expectations,’ but I don’t think so. After 7 years of hearing Repeal & Replace, why not done?” he tweeted.

Prior to Trump’s tweet, McConnell had delivered a blunt observation about the president’s demands.

“Our new president, of course, has not been in this line of work before,” McConnell said. “I think he had excessive expectations about how quickly things happen in the democratic process.”

McConnell added,”Part of the reason I think people think we’re under-performing is because of too many artificial deadlines unrelated to the reality of the legislature, which may have not been understood.”

NBC News observes that the president’s tweets have only helped to widen divisions among Republicans this week.