Jake Tapper hasn’t held back in his coverage and criticism of the Trump administration, including newly minted Secretary of State Rex Tillerson.

Tillerson, who is on his first trip to Asia, only took one reporter, Erin McPike, from conservative news publication Independent Journal Review.

During his first sit-down interview with McPike, Tillerson said that he doesn’t “need” media coverage.

I’m not a big media press access person. I personally don’t need it. I understand it’s important to get the message of what we’re doing out, but I also think there’s only a purpose in getting the message out when there’s something to be done. And so we have a lot of work to do, and when we’re ready to talk about what we’re trying to do, I will be available to talk to people. But doing daily availability, I don’t have this appetite or hunger to be that, have a lot of things, have a lot of quotes in the paper or be more visible with the media. I view that the relationship that I want to have with the media is the media is very important to help me communicate not just to the American people, but to others in the world that are listening. And when I have something important and useful to say, I know where everybody is, and I know how to go out there and say it.

He also told McPike that he plans, depending on the trip, to continue traveling without a press pool in the future because they’re “trying to save money.”

Tapper wasn’t happy with Tillerson’s assertion that he doesn’t need the media and called him out on Twitter, writing, “Not about his personal needs, it’s about YOUR right to know what your government is doing via Fox or CNN, Weekly Standard or NYT or whomever.”

Not about his personal needs, it's about YOUR right to know what your government is doing via Fox or CNN, Weekly Standard or NYT or whomever https://t.co/s0oHy8F7ti

RELATED: On “Real Time with Bill Maher,” Jake Tapper revealed the reason why he hasn’t held back in his coverage of President Trump 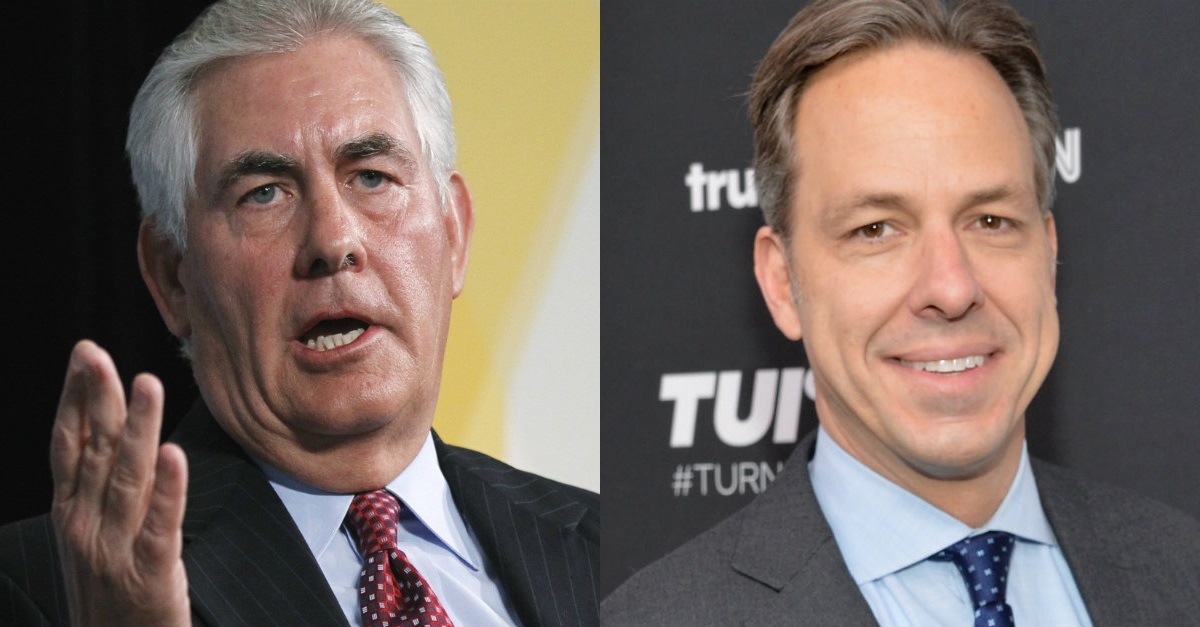