Trump trolled Democrats during the shutdown with an answering machine, and there’s audio proof 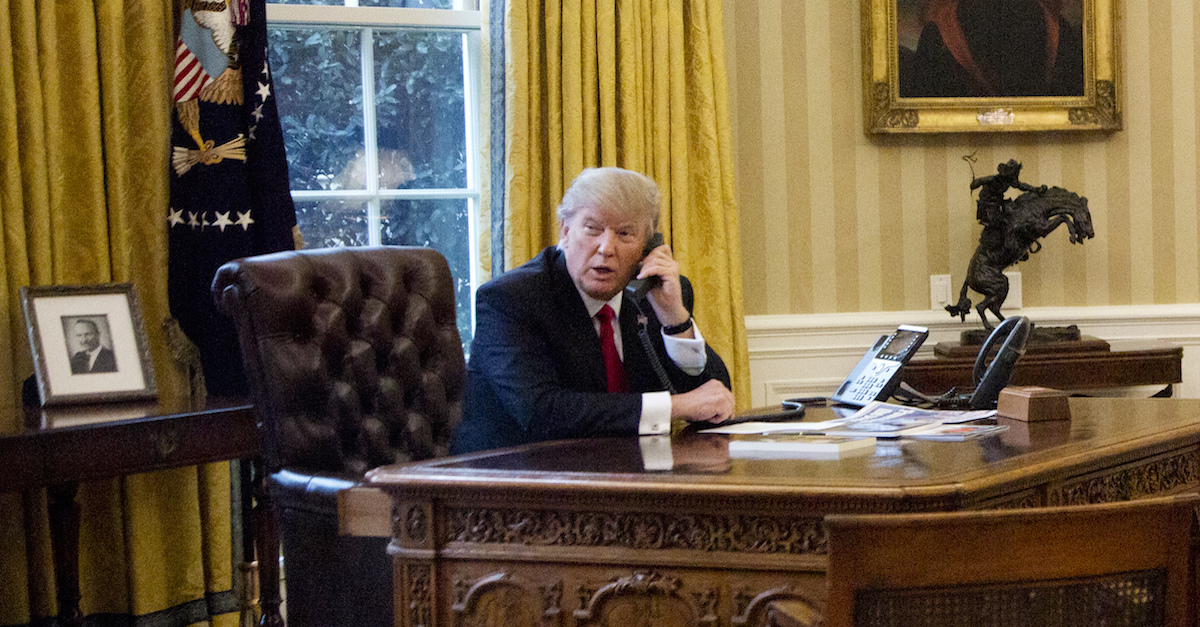 President Donald Trump has been known to stick a thorn in the side of his opponents, and the White House answering machine message that was specifically created for callers to hear during the government shutdown is another example.

Here’s what the message said:

Thank you for calling the White House. Unfortunately, we cannot answer your call today, because Congressional Democrats are holding government funding, including funding for our troops and other national security priorities, hostage to an unrelated immigration debate. Due to this obstruction, the government is shut down. In the meantime, you can leave a comment for the president at http://www.whitehouse.gov/contact. We look forward to taking your calls as soon as the government reopens.

The reaction on social media to this was as expected.

saw this going around and wanted to check for myself: here’s the message you hear today when you ring the White House comment line during the shutdown pic.twitter.com/sCquYj0XnX

EXPLAIN WHY you and the @GOP
are using an official @WhiteHouse
phone message line to deliver PARTISAN propaganda & political opposition messages?

This is incredibly unethical. The WH belongs to the citizens of the United States!

We DEMAND YOU REMOVE IThttps://t.co/MKjSx2FTvU

The political and partisan phone message you get when you call the White House is wildly inappropriate. I also wonder about legality. You can’t use White House facilities for partisan political purposes, and there are limits on career employees doing explicitly partisan things.

What about the message on the @WhiteHouse phone lines????? How is that legal?????? https://t.co/hsJuPY8zcb

The whole #Resistance hopes that the W.H. Ethics lawyer fields a ton of lawsuits from this too! Maybe that way they will have to erase the most outrageous outgoing message ever 🤬 https://t.co/nh2jHegcME

I really hope the message from the phone line of the WH will get u and ur crooked base in Trouble!!!https://t.co/uzdKUElSWR

U r worse than a little child that throws ahissy-fit. Be ashamed of urself! #TrumpShutdown

Trump also incited ire on social media just by releasing photos of what he was doing during the shutdown. Fox News tweeted out the images on Saturday and the response to them was also angry.

Moments ago, the @WhiteHouse released photos of President @realDonaldTrump working with his staff during what they're calling the "Democrat shutdown." https://t.co/Gl9Xn7xulJ pic.twitter.com/WjMBc1E5Xr

One showed Trump on the phone while sitting at his desk in a suit with no tie and a white MAGA hat. Another showed the president taking a stroll, this time wearing an overcoat.

A third photo showed Trump surrounded by staffers like Hope Hicks and Sarah Huckabee Sanders, along with notables Ivanka Trump and Jared Kushner.

Below is a sampling of the responses to that:

Wow. He looks so presidential in that silly hat. Remember when you dipshits went fucking insane because Obama didn’t wear a tie?

Thats what I would call "working". pic.twitter.com/Ci3eI5huqi

From the start, Trump said that Democrats were to blame for the shutdown. He said they picked a shutdown and “unchecked illegal immigration” over the U.S. military and security.

Not looking good for our great Military or Safety & Security on the very dangerous Southern Border. Dems want a Shutdown in order to help diminish the great success of the Tax Cuts, and what they are doing for our booming economy.

Democrats are far more concerned with Illegal Immigrants than they are with our great Military or Safety at our dangerous Southern Border. They could have easily made a deal but decided to play Shutdown politics instead. #WeNeedMoreRepublicansIn18 in order to power through mess!

For those asking, the Republicans only have 51 votes in the Senate, and they need 60. That is why we need to win more Republicans in 2018 Election! We can then be even tougher on Crime (and Border), and even better to our Military & Veterans!

This is the One Year Anniversary of my Presidency and the Democrats wanted to give me a nice present. #DemocratShutdown