Washington Protests Stay-at-Home Order with ‘Give Me Liberty or Give Me COVID-19!’ 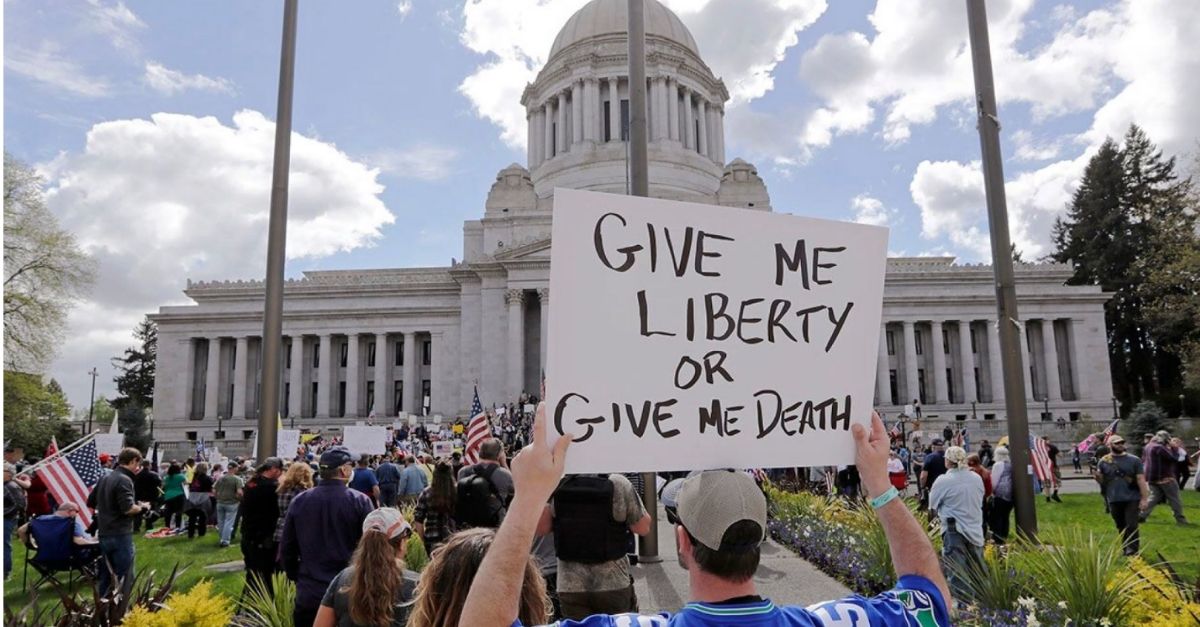 Nearing the end of April, everyone’s anticipating the end of the nationwide stay-at-home order placed in all parts of the country due to the coronavirus. And people are starting to get a little crazy.

Let’s just start with this fact: the state of Washington has a stay-at-home order until May 4. Considering we’re past halfway through April, that isn’t too long from now. However, thousands of protesters in this state have called for Governor Jay Inslee to put an end to this immediately, following with the reopening of all businesses. Interesting.

The mandatory social distancing guidelines that have closed down small businesses to help prevent the spread of the coronavirus, has accumulated many protestors who believe that these are violations of the constitution. ?Give Me Liberty Or Give Me COVID-19!? was the slogan on some of the signs of protesters who were protesting outside of the Washington State Capitol last Sunday.

Along with signs like that one, people were bringing American flags, Trump flags, guns, and their kids to this protest. No masks, no face coverings, and no following of social distancing guidelines. Republican Representative Robert Sutherland claimed that they are “starting a rebellion” and will “not listen to the governor” while “taking the state back.”

Sutherland, along with two other Republican lawmakers, are asking citizens to revolt against the stay-at-home order saying that if the state sends its ?goons with guns, we will defend ourselves.? I guess that explains why people were peacefully marching with guns.

No arrests were made, as people did peacefully protest. Governor Jay Inslee mentioned his frustrations in wanting to protect free speech, but also the lack in understanding that this coronavirus pandemic should not filter into politics. As people are losing their lives from the coronavirus outbreak, Inslee further took his argument against President Donald Trump.

President Donald Trump said in recent messages days before the Washington protest to, ?LIBERATE MINNESOTA!,? ?LIBERATE MICHIGAN!,? and “LIBERATE VIRGINIA,? supporting protesters of stay-at-home orders. Inslee claims that the Washington protest stems from President Trump “formenting domestic rebellion,” and in a statement, he said, “We?ve seen it before. The president is fomenting domestic rebellion and spreading lies even while his own administration says the virus is real and is deadly.?

According to FOX, although Washington has 11,948 confirmed coronavirus cases and 634 COVID-19 related deaths, Inslee plans to reopen in phases, starting with businesses. I certainly hope these people aren’t biting their tongues in the near future. Who knows how everyone else around the United States will act if the spread of the coronavirus increases? I personally am going to pray for the opposite. I want to keep hearing more positive coronavirus updates. I wonder what the health care workers of these states have to say?