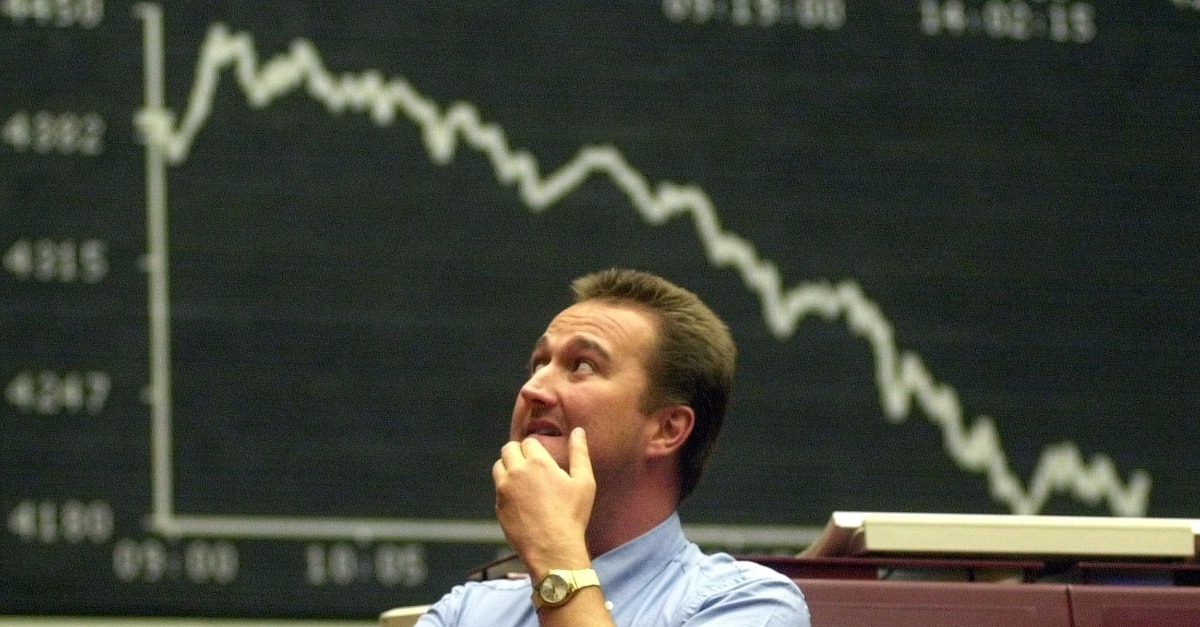 AP Photo/Bernd Kammerer
A stock trader reacts in front of the indicator panel of the German stock index DAX at the German stock exchange in Frankfurt, in this Sept. 14, 2001 file photo. The DAX dropped more than 200 points that day. Global stock markets extended their shakeout into a second day Tuesday, Jan 22, 2008 plunging amid fears that a possible U.S. recession will cause a worldwide economic slowdown. The dramatic declines in Asia and Europe were expected to spread to Wall Street, where stock index futures were already down sharply hours before the trading day began. (AP Photo/Bernd Kammerer)

The Great Recession began well before 2008. To be sure, it wasn’t until September of that year that then-Treasury Secretary Hank Paulson called congressional leaders into a room and told them they had to pass a bank bailout package or the economy would cease to exist ? a cold barrel of steel to the temple if ever there was one.

But 10 years ago in autumn 2007 the tremors were already being felt. New Century Financial and American Home Investment had filed for bankruptcy. A crisis at the UK’s Northern Rock had set off the first British bank run in 150 years. Most foreboding of all, mega-bank Bear Stearns had shuttered two of its hedge funds, an omen of its eventual collapse and the many other dominoes that would fall afterwards.

A decade later and that recession is still stamped on our national psyche, far more impactful than other downturns in 1992 and even the 1970s. The economy has rebounded if you live in a city or a suburb, if you work in the service industry or tech, if you’re young and college-educated with computer skills and a will to succeed. Deceptive GDP statistics look pretty good, as does the unemployment rate.

But if you’re a former coal miner or hardhat on the GM assembly line, the so-called recovery is a cruel illusion. The recession accelerated trends toward deindustrialization and automation that were already in motion; what began on Black Monday exactly 40 years ago when the Steel Valley began eliminating jobs proceeded logically through the slow-mo annihilation of the Rust Belt. What didn’t change was workers’ deeply human attachments to their communities, creating an economic pickle that bedevils us to this day. The damage is irreversible, the jobs aren’t coming back, yet the people are still there, wondering why the charlatanical promises of plenty made by politicians have yet to bear fruit.

RARE POV: The national debt hit $20 trillion ? but does anyone care?

There were many forces beyond the recession that elected Donald Trump: abortive wars, the cultural imperialism of the left, the thorough inadequacy of Hillary Clinton apparent now to all but herself. We also shouldn’t fall into the Marxist trap of seeing a materialist engine behind all of history: it’s perfectly possible that Trump would have succeeded without the recession, propelled by that host of other causes. Revolutions can happen during good economic times, too, as the 1960s demonstrate.

Still, life in America is built around a job, and the outsize role played by the recession in fraying America’s civic fabric can’t be denied. Today, the crash’s Wall Street and Capitol Hill architects appear as foolish men from Greek mythology who fiddled with forces they didn’t understand ? only instead of being disciplined by the gods, they frolic freely, having learned nothing. The calamitous Community Reinvestment Act is still law; subprime mortgages are back in vogue. Elites yelping about the damage Trump is doing come off as arsonists complaining that their houses have been lit on fire.

The recession also engulfed the legacy of Barack Obama. Assigned a mandate to rebuild the economy, he instead presided over a half-baked inventory of neo-Keynesian lab experiments that spent a lot of money moving the pieces around without ever allowing them to be properly built upon. Cash for Clunkers expedited demand, the stimulus offered temporary employment, Obamacare did little to arrest rising premiums. The blue-and-green economy Obama envisioned wherein unionized workers fastened bolts to renewable energy infrastructure never materialized; indeed, were it not for the natural gas boom, we’d be even worse off than we are today.

RARE POV: Barack Obama?s progressive agenda has failed ? his legacy will be decided by his successor

It may be that there was little Obama could have done: The recession predated him and its effects confounded the silly groupthink of the economists advising him. But the end result was that he failed, misinterpreting his election as a command for more government, which engendered the Tea Party backlash, and implementing policies that didn’t work, giving rise to Trump. Having tried the politics of optimism and found it wanting, the electorate decided only a neutron bomb set off in the halls of power would do.

Coming as it did after 9/11 and the Iraq war, the recession finished off an age of innocence into which my generation grew up: the 1990s, with the West at peace, Nickelodeon game shows on TV, chirpy America Online CDs arriving in the mail. Those days in retrospect seem both naive and oh-so-desirable. Ten years of economic consequence ? it isn’t a decennial worth celebrating but it’s one that must be acknowledged.