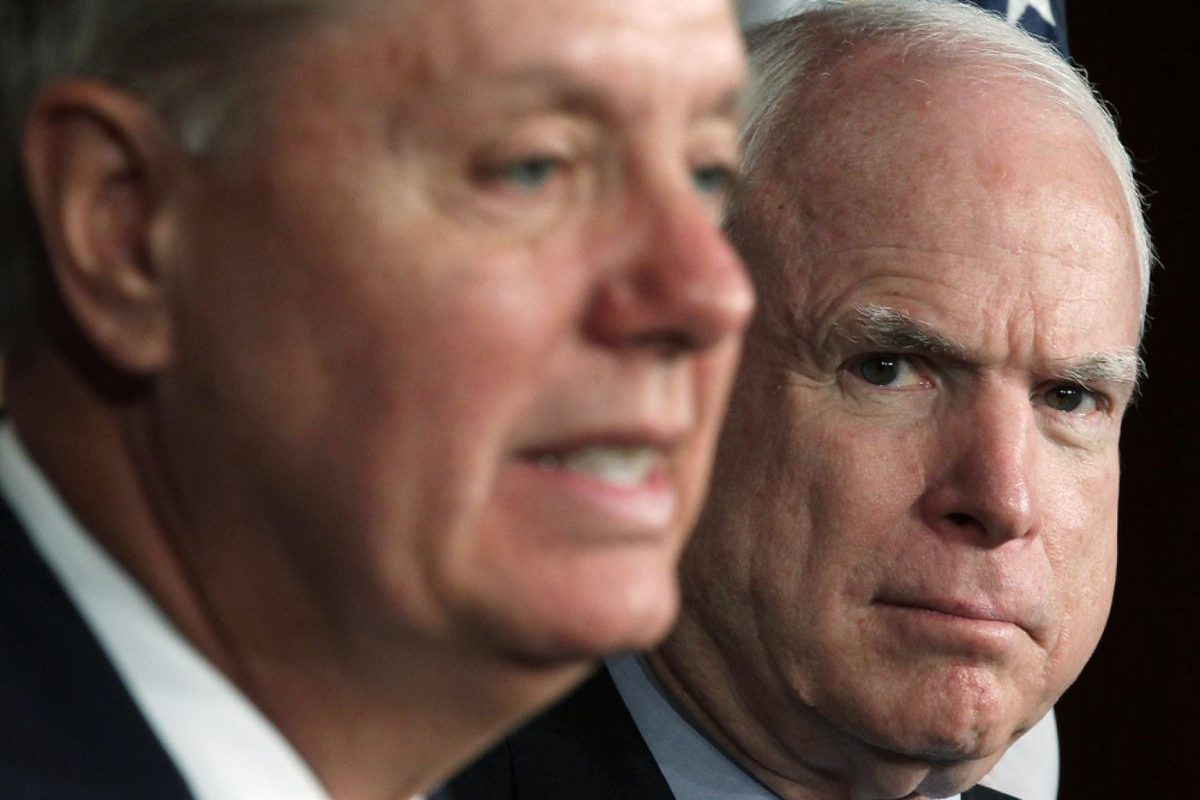 When Senators John McCain and Lindsey Graham issued a joint statement condemning Donald Trump’s recent executive order restricting travel to the U.S. from specific countries, the president responded, as he often does, via Twitter.

The joint statement of former presidential candidates John McCain & Lindsey Graham is wrong – they are sadly weak on immigration. The two…

…Senators should focus their energies on ISIS, illegal immigration and border security instead of always looking to start World War III.

Leaving the immigration issue and even Trump’s characterization of the senators’ immigration records aside for the moment, let us focus on the part of the president’s statement that is undeniably true: McCain and Graham always want war.

Coming from the hawkish neoconservative wing of the Republican Party, Sens. McCain and Graham quite literally believe that if the U.S. does not become involved militarily in almost every global hotspot imaginable, America is at risk. If most Americans and even most politicians worry about boots on the ground in places like Syria, McCain and Graham are the first to call for 20,000 troops.

In 2013, the progressive Mother Jones actually created a map of “All The Countries John McCain Has Wanted to Attack.”

“Over the last two decades, McCain has rarely missed an opportunity to call for the escalation of an international conflict,” writes Mother Jones’  Tim Murphy and Tasneem Raja. “Since the mid-1990s, he’s pushed for regime change in more than a half-dozen countries?occasionally with disastrous consequences.”

Those countries include Syria, Iraq, Afghanistan, Libya, Kosovo, Nigeria, Bosnia, North Korea, Iran, Georgia, Sudan, Mali, China and of course, Russia. McCain was one of the first to call Russia’s involvement in the U.S. election an act of war.

Lindsey Graham might even be more war hungry than McCain.

In addition to lining up with McCain in wanting U.S. intervention in most of the countries listed above, in 2014 Graham said ?the world is literally about to blow up,? when he thought the U.S. would not use airstrikes against Syria.

The world will blow up if we refuse to blow things up. That’s how Sen. Graham’s mind works.

Graham also said a failure to go to war with Syria could result in the U.S. getting nuked. No seriously, he really said this.

RELATED: U.S. Senator wonders aloud whether or not he is on President Donald Trump?s kill list

Then there’s Iran. In 2012, Defense Secretary Robert Gates warned that ?The results of an American or Israeli military strike on Iran could, in my view, prove catastrophic, haunting us for generations in that part of the world.? Not surprisingly, Graham has long been one of biggest advocates for airstrikes on Iran.

Like McCain, Graham is also keen on the U.S. getting far more aggressive with Russia.

President Trump is wrong about a lot of things–but calling John McCain and Lindsey Graham warmongers isn’t one of them.