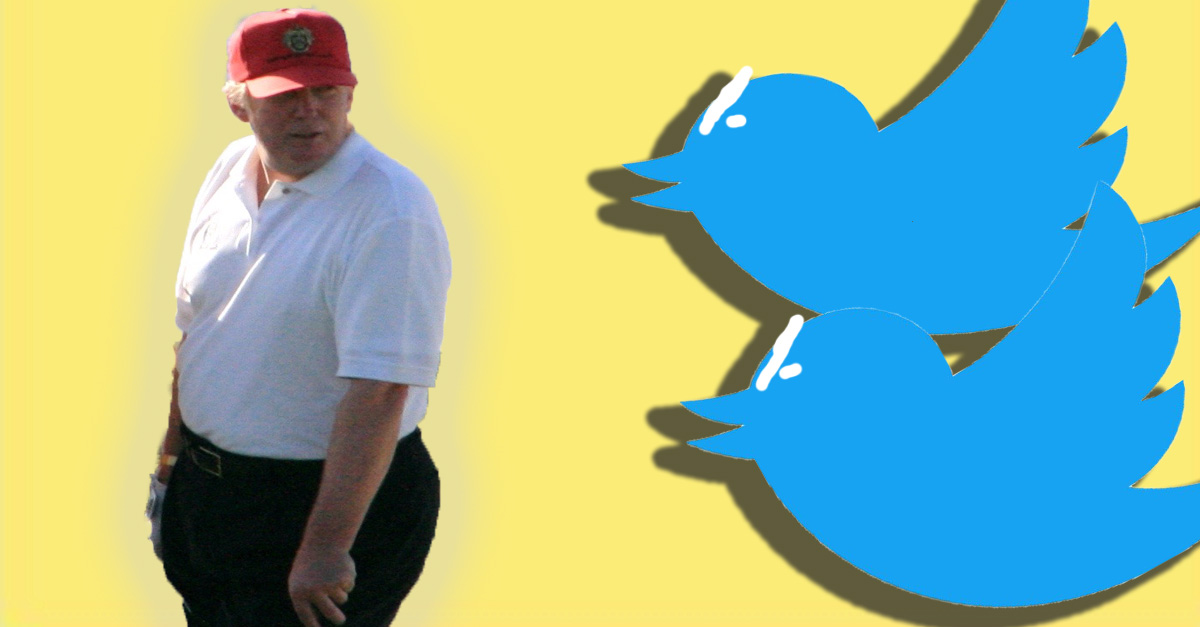 President Donald Trump spent Black Friday on the golf course where he took in a round with professional golfers Dustin Johnson and Tiger Woods.

Trump is visiting his resort in Mar-a-Lago for the holidays, but he headed over to Jupiter, Florida for Friday’s game, announcing the activity on his Twitter:

After Turkey call I will be heading over to Trump National Golf Club, Jupiter, to play golf (quickly) with Tiger Woods and Dustin Johnson. Then back to Mar-a-Lago for talks on bringing even more jobs and companies back to the USA!

After that tweet, he was silent for three hours before tweeting about the terrorist attack in Egypt that claimed hundreds of lives. The president’s critics took to social media to bash him for hitting the green. Internet personality Kyle Griffin pointed out that the White House press pool doesn’t have access to the president but visitors at his golf course have a front row seat.

The W.H. press pool hasn’t had any access to Trump so far as he golfs with Tiger Woods, but lots of people at the club are taking pictures. https://t.co/7pwWCblOkq

He also noted that Woods is designing a Trump Golf Course in Dubai.

Important note via @SRuhle on Trump’s golf outing with Tiger Woods today: Woods is designing a Trump-branded golf course as part of a larger development in Dubai. https://t.co/uFwvv2r60x

One visitor uploaded a photo with Woods, writing “Just your average morning!! Excited my kids were able to see our President and the others were a bonus!”

Trump has been an avid golfer, even in his role as president and this is not the first time he got in a few holes with Tiger. In late December, the pair were spotted at another one of Trump’s golf courses in Florida, though that game was unannounced.

His frequent games have critics crying hypocrisy, since Trump constantly derided Obama for spending too much time on the golf course.

President Obama should have gone to Louisiana days ago, instead of golfing. Too little, too late!

But Trump, who has made (and lost) fortunes on his golf courses, also prides himself on getting business done on the golf course — though now he makes political moves on the fairway. In recent months, he’s played with a number of politicians including Senators Lindsey Graham (R-SC) and Rand Paul (R-KY).

Equally interesting, is the pair of golfers that showed up on the course today. Woods is overcoming a string of difficulties after his “sex addiction” scandal a few years ago and his level of play has faltered. More recently, he was charged with a DUI after he was found, asleep at the wheel, by police in May. A toxicology report showed that, while he was not intoxicated, Woods had five drugs in his system at the time of his arrest.

RARE OPINION: We can?t talk about sexual misconduct without talking about power

Johnson, who joined Trump and Woods on the course is a PGA Tour golfer who owns houses in Florida, including one in Jupiter, that he calls his home. He might not be a household name, but make no mistake, Johnson is a superb golfer. The 33-year-old South Carolina-native was the favorite to win the Masters’ Tournament this year before he pulled out following a freak accident, the Palm Beach Post reports. Johnson and Trump have played before and are allegedly very close. His grandfather claims that they’ve exchanged numbers and that they “talk all the time.” He says that Trump called Johnson on Thanksgiving and “asked him to come over for dinner.”