Menu
Follow us
Search
Menu
Search
In this Nov. 10, 2016, photo, President-elect Donald Trump and House Speaker Paul Ryan of Wis., pose for photographers after a meeting in the Speaker's office on Capitol Hill in Washington. Washington’s new power trio consists of a bombastic billionaire, a telegenic policy wonk, and a taciturn political tactician. How well they can get along will help determine what gets done over the next four years, and whether the new president’s agenda founders or succeeds. (AP Photo/Alex Brandon)

Vice President Mike Pence and President Donald Trump have announced they’re headed to Kentucky, home of the Senate’s most ardent critic of the GOP’s new health care bill, Senator Rand Paul, whose mind the duo are hoping to change.

They’ve already gone to work on Kentucky Governor Matt Bevin. Bevin had previously expressed his own reservations with the bill, and after meeting with Pence last weekend, he still doesn’t fully support it.

Sources say to watch Trump’s travel schedule for signs that he’s going to strong arm the more stubborn conservative members of the House. Also, House Majority Whip Steve Scalise and other high-ranking members have threatened House Republicans to get in line and support the health care bill, or President Trump might back primary challengers against them in 2018, according to sources on Capitol Hill.

That’s a serious threat, given how many House Freedom Caucus members come from districts that heavily favored Trump last year.

Still, President Trump may not be as crazy about the GOP’s new health care bill as he’s let on publicly. It’s a strategy straight out of “The Art of the Deal.” The whole key to his success, according to the book, is that he keeps his options open, not committing to any one plan, but maintaining alternatives so as to keep his partners and opponents guessing. It’s also clear from “The Art of the Deal” that Trump is very used to dealing with politicians who throw up roadblocks and with those who might cooperate halfway for their own purposes.

RELATED: As the CBO report emerges, Ryancare is looking more like Obamacare by the day

GOP leadership in the House and Senate have been careful to present the health care bill as a binary choice: vote for it or be responsible for Obamacare. Yet the president’s press secretary Sean Spicer carefully walked that line back in a press conference on Wednesday:

…regardless of what caucus or faction you’re a part of, if you have an idea that can enhance this bill and make it more patient-centric and achieve the goals, then we’re all for it. So that’s a process. …There have been a lot of ideas, a lot of debate, and a lot of issues put forward into how to craft this. So this has been something that’s been in the works for seven-plus years in terms of getting members, at least in the Republican conference, to coalesce around principles and ideas and solutions to make this a more patient-centric thing.

Now consider this passage from “The Art of the Deal” about a real estate agreement Trump once worked on (emphasis added):

I say “okay, for now; I like to keep as many options open as I can… As you are aware…there is no one I would rather do business with than Marty Davis.” That happened to be true, for Martin Davis is a truly talented man, but there are also a dozen other companies who would kill to have eight theaters in a top location. In other words, if I can’t make a deal I like with Marty, I’ve got a lot of other options.

Could it be that one of those options is letting Ryan fall on his sword?

Steve Bannon, a close advisor of the president, has never made any bones about using his former news outlet Breitbart as a platform to “destroy” members of what he called “the permanent political class.” Ryan is at the top of that list. “Paul Ryan was grown in a petri dish at the Heritage Foundation,” Bannon has said. Breitbart continues to publish pieces almost daily excoriating Ryan and the site has been ripping the “RINOcare” plan to shreds.

RELATED: Paul Ryan’s Obamacare replacement is a cosmetic rush job, and there’s a reason for that

The health care bill from the GOP, opposed by every conservative group and eschewing any real free-market reform, seems designed to inflame that smoldering hatred. As Trump equivocates and Bannon plots, Ryan has to be feeling a bit nervous right now, especially since, for reasons unknown, he’s putting everything on the line for legislation that appears to have been drafted by insurance companies and that does nothing to solve the issues that are driving up health care costs.

In his book, Trump continually reiterates that, regardless of how much he might like a deal, he always remains flexible because “on the other hand, I don’t want to rule out anything.”

“You’re generally better off sticking with what you know,” he wrote. “And…sometimes your best investments are the ones you don’t make.” “I’m a great believer in asking everyone for an opinion before I make a decision,” he adds.

No doubt Trump is going to Kentucky to test the waters and gauge whether the health bill is met with approval. If the people stand behind Paul…well we already know who the fall guy is going to be. 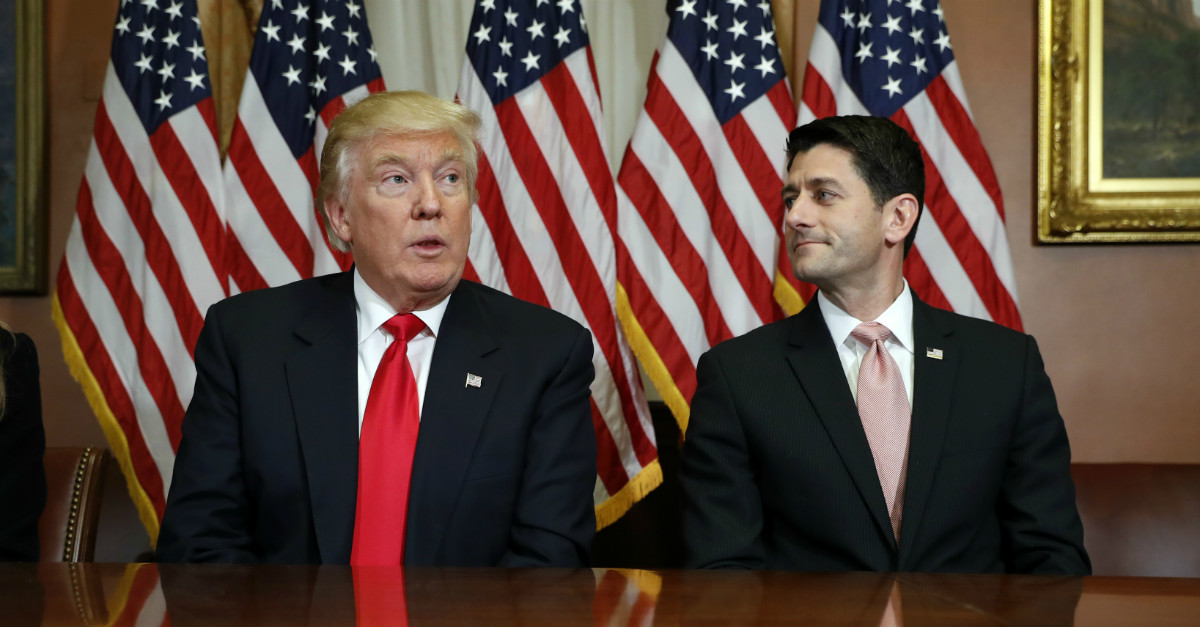