It’s one thing not to like the president, but the false reporting is really getting out of hand 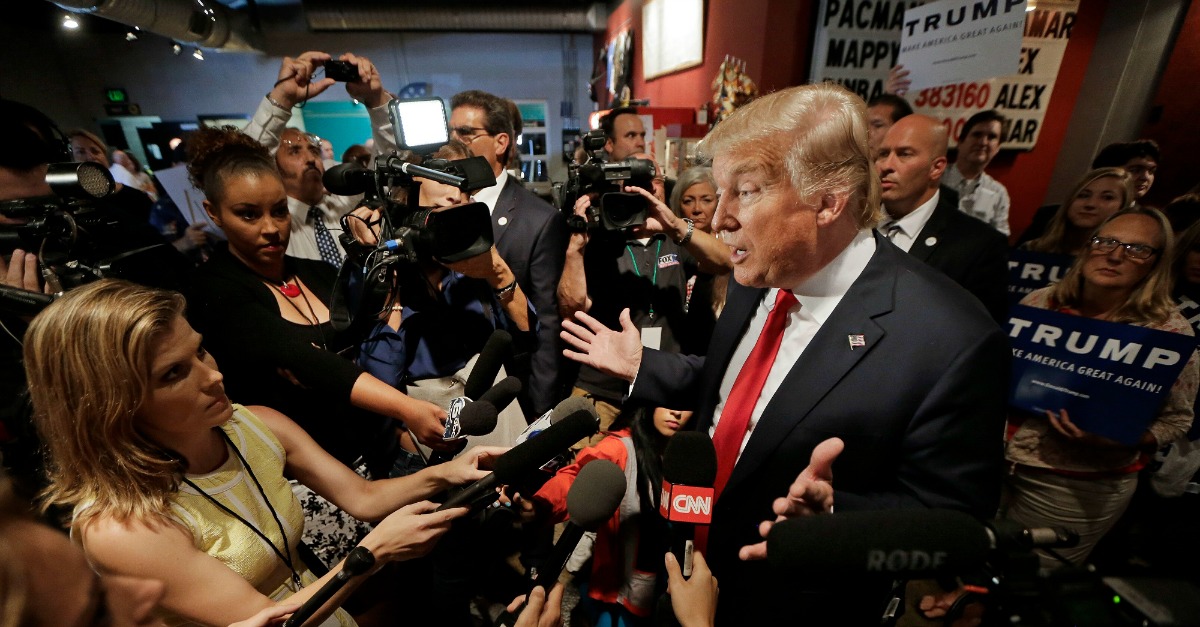 AP Photo/Mark Humphrey
Republican presidential candidate Donald Trump answers questions from reporters after speaking at the National Federation of Republican Assemblies on Saturday, Aug. 29, 2015, in Nashville, Tenn. Trump will decide soon whether to mount a third party bid if he loses the Republican nomination for president, the real estate mogul said Saturday. "I think over the next couple of weeks you're going to see some things that are very interesting," Trump said after a speech in Nashville to a gathering of tea party activists. (AP Photo/Mark Humphrey)

If there’s only underlying theme about journalism in the Trump era, it’s hysteria.

Personally, I’m not the biggest fan of the president. I think some of his policies are downright terrifying, particularly on trade and immigration. However, I won’t pretend that every decision he makes takes us one step closer to the apocalypse, because that simply isn’t true. Such a vision of doom and gloom is dishonest, considering that the president has been largely unsuccessful at enacting his agenda thus far. It’s been months since he’s taken office, and all of his signature campaign promises ? the wall, Obamacare repeal, the travel ban ? are either caught up in Congress or have been struck down by the courts.

RELATED: The federal government doesn?t need to be relocated, it needs to be cut

Yet, I’ve been astounded at how many journalism outlets have routinely reported simply false facts about the Trump administration’s agenda. It’s one thing to dislike the president’s agenda, but falsely reporting the facts is almost becoming the norm for many outlets. In their blind hatred for Trump, many journalists are writing the very fake news they claim to despise.

The latest example is the battle over the American Health Care Act.  The stories surrounding the GOP leadership’s proposal have taken hyperbole to a new level, as my Young Voices colleague Liz Wolfe explains in The Washington Examiner:

Headlines surrounding the AHCA have ranged from “Under The New Healthcare Bill, Rape Could Be A Pre-Existing Condition” (Huffington Post) to “In Trump’s America, Being Sexually Assaulted Could Make Your Health Insurance More Expensive” (New York Magazine) to “How the Horrific New Republican Health Care Bill Punishes Women” (Gizmodo).

The truth, of course, does not come even close to this picture. In fact, there are laws on the books in almost every state that prevent insurers from discriminating against rape victims. As Wolfe goes on to explain, “The only states that don’t have these important anti-discrimination laws are Idaho and Vermont.”

As I wrote last month, one of the main victims of this constant distortion has been the FCC ? especially in regard to net neutrality and privacy. However, the situation got even worse after Stephen Colbert’s controversial remarks about the president last week, which led to presumably thousands of complaints submitted to the FCC.

Headlines in Variety and The Hill implied that the FCC would take disciplinary action against Colbert because an investigation had been open, as if the agency has been weaponized into Trump’s propaganda wing. However, they forgot to mention one small fact: every FCC complaint triggers an investigation.

RELATED: Chicago?s rat problem is so bad that they are now pleading with the public to not feed them

As Business Insider senior editor Josh Barro tweeted in wake of the incident: “There’s this huge rush to freak out about everything that happens in Trump’s America without checking to see if it’s normal/important/etc.”

In our age of content oversaturation, it’s easy for reporters to succumb to yellow journalism-type tactics in the eternal search for clicks ? especially when the president is so unpopular. The problem is that such a practice is downright dishonest and only serves to polarize political rhetoric even further.

Crying wolf at every step Trump takes will only lead to outrage exhaustion in the public’s eyes. Arguably, it’s the reason the man was elected in the first place. Effective critiques of the Trump administration must be grounded in objective truth and collected analysis, not hysteria.