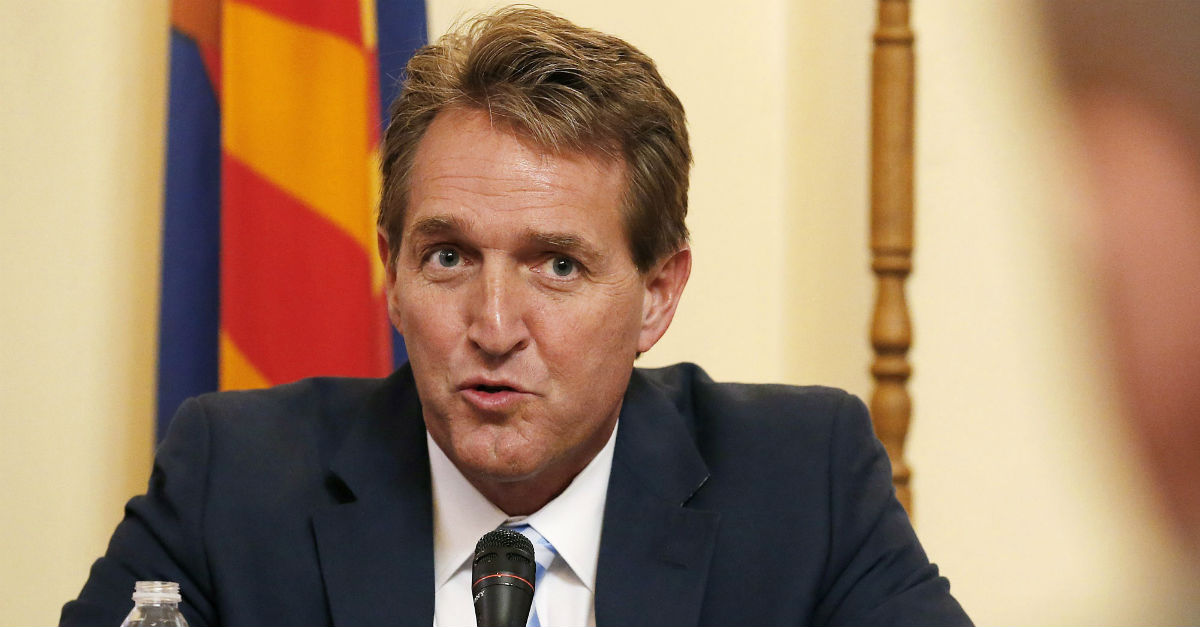 AP Photo/Ross D. Franklin, File
FILE - In this Nov. 23, 2015, file photo, Sen. Jeff Flake, left, R-Ariz., speaks during a field hearing in Phoenix. A large number of GOP senators are skipping next week’s convention in Cleveland, citing a range of prior commitments, from fly-fishing to lawn-mowing. Although a majority of the Republican senators do plan to attend, the level of absenteeism is high as Donald Trump prepares to claim the Republican Party’s nomination. Flake said he has to mow his lawn. (AP Photo/Ross D. Franklin, File)

There’s a lot to like in Senator Jeff Flake’s recent op-ed deploring President Donald Trump’s co-option of the Republican Party. Flake is absolutely correct that conservatives didn’t do enough to expunge conspiracy theorists and bottom dwellers from their movement during the Obama years. He’s right, too, that the creeping normalization of Trump is disturbing. And no one will agree more heartily than me that Congress has ceded too much power to the presidency.

The problem with Flake’s op-ed is his timeline. For Flake, an Arizona Republican and vintage #NeverTrumper who the vengeful president is reportedly trying to destroy, Congress was striding merrily along, fulfilling its duties, forming “lines in defense of congressional prerogatives in a unified front against the White House, regardless of the president’s party.” And then something went catastrophically wrong—but Flake is skimpy on the details. “The period of collapse and dysfunction set in, amplified by the internet and our growing sense of alienation from each other,” he writes, “and we lost our way and began to rationalize away our principles in the process.”

All of that is true. But the reason our voters abandoned their principles isn’t so facile as just the dehumanization of the Internet. There’s a policy element at work here, too. Trump’s ascent is a reaction to the turbulent events of the 2000s and early 2010s, during which the right failed, fractured, tried on several new wardrobes, and ultimately was unable to persuade voters that its ideas were relevant to their plights. Trump didn’t leap from the head of a deplorable-capped Reddit-addled lost boy; he was created by the GOP, its failures of governance, and its inability to craft a relatable alternative.

You cannot explain Donald Trump without the Bush administration. The failure of so-called “compassionate conservatism” under George W. Bush resulted in an electorate jaded with the Republican establishment. The war in Iraq—fought disproportionately by future Trump-voting Appalachians and Southerners—was a debacle. Huge spending increases yielded a sputtering post-Clinton recovery and then the worst recession since the Great Depression. No Child Left Behind failed by its own metrics, which compelled Obama to implement the reviled Common Core.

The Bush administration was not a period of policy success and it was followed by something much worse: an uneven and torpid recovery under Barack Obama. It took years for many Americans to start feeling its benefits and it largely left behind those who worked in manufacturing, energy and other aging Rust Belt sectors. These voters looked to Washington and saw deep and coruscating failures, sequestered wealth while the rest of the country suffered, pointy-headed technocrats who had tried to manage their lives and failed, leather-chaired pundits who’d been wrong about everything, and values different from their own. The tea party briefly appealed to them—it was anti-government; they had become so—but ultimately the solutions it offered felt a bit abstract, disconnected from the problems of the here and now. Their sense of injustice burned unslaked.

It was Donald Trump who won them over, first by acknowledging their pain—”American carnage!” “Make America Great Again!”—and then by pledging to fix it easily and “bigly,” to reopen those mines, slap tariffs on those fleeing corporations and rebuild our crumbling infrastructure. Trump didn’t just out-yell his Republican rivals; he out-diagnosed them and out-promised them. His rhetoric elicits hand-wringing from Flake, but the Arizona senator should really be challenging those who discredited the traditional right, made it appear as the province of investment bankers and Vitamin D-deficient think tank insiders, thereby enlivening Trump’s revolt. To defeat the president, you’ll have to go through his voters, and that means finding a way to make our principles relevant to their everyday struggles.

So we should stand for free trade, but no more massive TPP-style deals haggled out in secret and set to affect huge swaths of the globe without serious public input. We should roll back the federal government, yet we can’t be blind to the bits of it—Medicaid comes to mind—that people genuinely depend on. We should be a beacon of immigration to the world, but understand that the left’s vision of a borderless globe is utopian nonsense, and that, as Theresa May has said, a citizen of the world is a citizen of nowhere. We should advocate for a strong America, while swearing off forever our disastrous preemptive wars in the Middle East.

Most of all, we should acknowledge that it’s not just the Trump-era GOP that’s—to use Flake’s phrasing—”in denial.” A lot of Republicans have been, too.