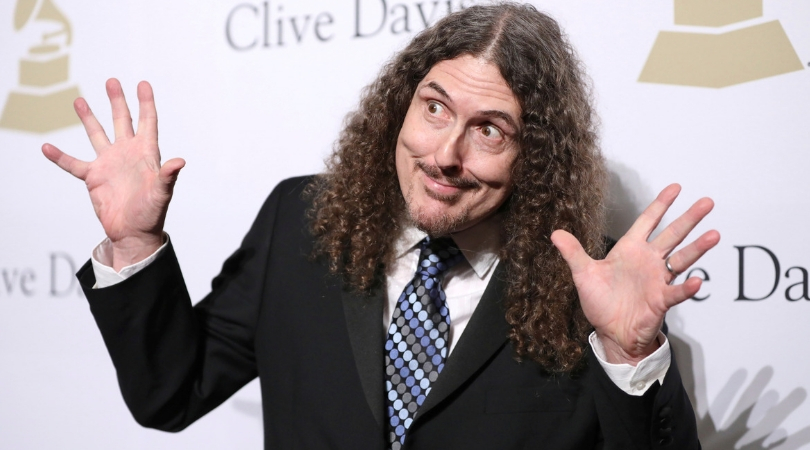 What kind of place would the world be without the parody-ists and trolls and spoof artists? The ones who poke fun while everyone else is out there busting their balls and losing their shit? Nowhere. We would be nowhere without them. At least that’s what they want us to think. At least from time to time, they offer us great comic relief. Weird Al Yankovic is one of, if not *THE* best spoof men out there. For everyone who likes to sing the wrong words to songs, these Weird Al Songs are for you:

A parody of “My Sharona” by the Knack. A very popular track that hit right before the ’80s. Instead of worshipping and lusting after a woman, Weird Al is weirdly singing about food, bologna in particular. Stutters and fill noises included in this snacky track!

This one is an accordion-driven spoof of the Joan Jet jam “I Love Rock ‘n’ Roll. Over one of the most definitive songs of its time, our wild-haired friend has made the space to talk about how much he loves one flavor of ice cream, in particular. Don’t perform this at your school though, someone in the comments got suspended for it.

A personal favorite. Does anyone even remember James Blunt? His song was EVERYWHERREEEEE for what felt like 2 years. And it was just the one song! Sure it was cute the first 10 maybe 15 times. The story of a guy that saw a girl for the first time (only time) and wrote her a sweet song (that made him millions.) Yankovic took the time to pen a sweet message to, well…a “la la la la loser”. Kinda sad, but kinda funny. Maybe better than the original?

What’s music without Madonna? How good is Madonna if Weird Al Yankovic didn’t parody her? Well, he did, so we don’t have to worry about that. The song “Like a Virgin”. The parody setting: A med school student. Just press play. This song’s just a great time.

6. Another One Rides The Bus

An Ode to public transport. Although Weird Al Yankovic’s career officially started with the release of My Bologna, Another One Rides The Bus really helped him catch some traction. Given that Queen’s Another One Bites The Dust was such a great song, and that this spoof is hilarious.

Chamillionaire’s Ridin was a chart-topper. White & Nerdy was just as singable and replayed. Only these two can make the struggle between hood life and being nerdy a common thread.

This was probably the very first Weird Al Yankovic song I heard. Needless to say, I was amused and confused. But aren’t we all with this guy? This song’s a nod to Gangsta’s Paradise by Coolio. If you don’t know anything about being a G, listen to Coolio. If you wanna learn about being Amish, bump this WAY jam.

3. Trapped in the Drive-thru

Oh, R. Kelly. The original song that Weird Al spoofed is from back when Kelly was only rumored to be problematic. His Trapped in the Closet was parodied by friends, cousins, and South Park alike. It was originally chronically the tales of a man who gets, well, trapped in the closet when a woman he hooks up with’s husband comes home and almost catches them. Trapped in the Drive-thru chronicles a whole different type of being trapped.

Weird Al Yankovic covered a couple of Michael Jackson songs. Beat it and Bad. Bad was changed to “Fat” and honestly is probably sorta problematic today. It earned him a lot of acclaims, which today would be translated into critique, but Youtube numbers can’t tell. Eat it reminds peeps to be grateful for their food because there are people out there who go without. Shoutout to Weird Al for being all of our stand-in moms. Also, check those dance moves. Pure gold.

This nirvana cover of Smells Like Teen Spirit is great from start to finish. From the fact that Weird Al Yankovic has no idea what he’s singing- or what Kurt Cobain was singing, for that matter. To the wig in the music video and the “f* your parent’s line”. So. Much. Angst. Kurt might hate it, or love it. Hard to say.