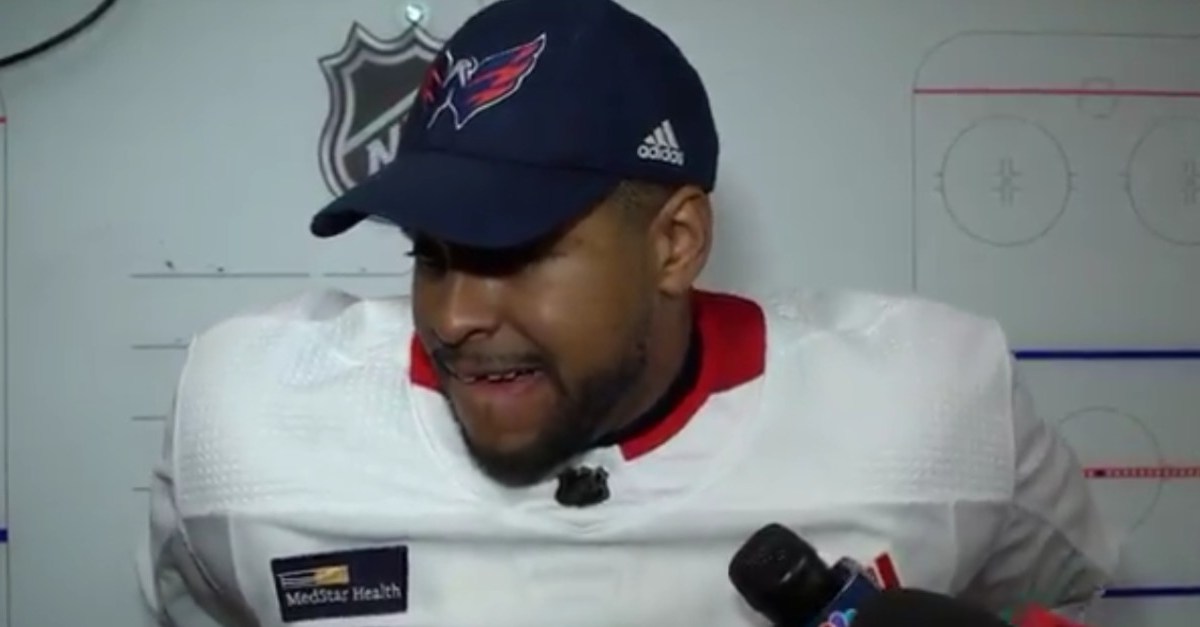 Four fans of the Blackhawks may never be allowed to enter the United Center ever again and for good reason.

RELATED: Corey Crawford may be out for season, Blackhawks fear playoff chances

?There?s absolutely no place in the game of hockey or our country for racism,? stated Barry Trotz, Capitals head coach. ?I think it?s disgusting. There?s no place for it. Athletes in our country don?t deserve that. It just shows ignorance.?

“There’s absolutely no place in the game of hockey or in our country for racism.” — #Caps Coach Barry Trotz on an incident involving Devante Smith-Pelly on Saturday in Chicago. Four fans were ejected for taunting DSP when he was in penalty box. pic.twitter.com/kxn3uClSBY

Security kicked the fans out of the arena, promptly after the chanting.

The Blackhawks released the following statement regarding the incident:

?We were made aware of an incident at tonight?s game involving a small group of attendees who made harmful comments directed at Washington Capitals player Devante Smith-Pelly. The fans were immediately removed and we apologize to Smith-Pelly and the Washington Capitals organization. We are committed to providing an inclusive environment for everyone who attends our games and these actions will never be tolerated.?

Statement on the incident at tonight's game pic.twitter.com/7o02AaLQwz

The NHL stated that no player, coach, official or fan should ever have to endure abuse while at the games.

To read the full statement, scroll on below.

?Last night in Chicago, individuals directed racial taunts and abuse at Washington Capitals player Devante Smith-Pelly,? said NHL Commissioner Gary Bettman. ?The National Hockey League condemns this unacceptable and reprehensible behavior. The League fully supports the actions taken by the United Center and the Blackhawks to eject the offenders and would expect the same response to any similarly unacceptable behavior at any of our arenas.

?While this incident was isolated in nature, no player, coach, official or fan should ever have to endure such abuse at one of our games. The League will take steps to have our clubs remind all stakeholders that they are entitled to enjoy a positive environment ? free from unacceptable, inappropriate, disruptive, inconsiderate or unruly behaviors or actions and may not engage in conduct deemed detrimental to that experience.?

To watch Smith-Pelly’s comments on the incident, scroll on below – courtesy of the Washington Capitals.

Devante Smith-Pelly on the incident last night in Chicago. pic.twitter.com/Oz9qfFWMQH