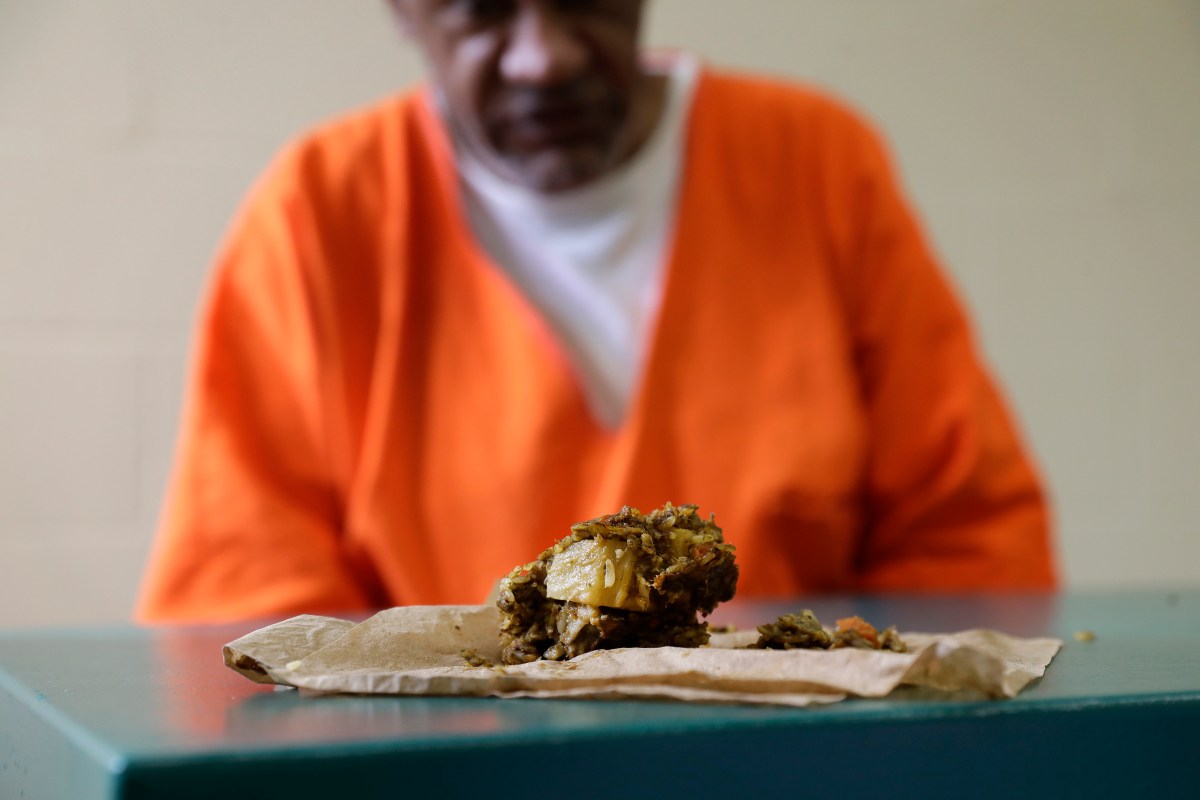 AP Photo/Patrick Semansky
In this Oct. 26, 2016 photo, a partially eaten chunk of nutraloaf sits in front of inmate Kevin Dickens during an interview with The Associated Press at James T. Vaughn Correctional Center in Smyrna, Del. While other states are gradually moving away from special diets for unruly prisoners, Delaware officials are sticking with their use of an unsavory, meatless mashup of vegetables, bread, rice and other ingredients typically given to inmates for misbehavior involving food or bodily waste. (AP Photo/Patrick Semansky)

In a class-action lawsuit ruled on Monday can move forward against Twentieth Century Fox Television, ruled by a U.S. district judge. The lawsuit claims the network encouraged Cook County officials – who are also being sued- to shut down several vital areas of juvenile jail while filming scenes for “Empire” — to the detriment of the inmates.

In the second season of Fox’s Empire, the show’s main character, Lucious Lyon, played by Terrence Howard, finds himself in prison. To realistically portray his time in jail, Fox filmed several scenes at the Cook County Juvenile Temporary Detention Center in Chicago during the summer of 2015. During filming, the detention center was placed on lockdown on three different occasions for several days in each instance, the lawsuit claimed. Prisons are generally placed on lockdown if there are security threats, not for the filming of a television show.

During the lockdown, several areas of the detention center, including its school, the family visiting area, outdoor recreation yard, library, and chapel were “placed off limits so that Fox’s agents and employees could use them to stage and film the show,” according to the lawsuit. All the while, the inmates were either forced to remain in their cells or confined to small rooms called “pods,” where they were forced to sit “for days on end,” the lawsuit said, claiming these restrictions were “more severe than those governing many adult jails.”

The prison, as a result, canceled some of their family visits, rehabilitation sessions and schooling, according to the lawsuit. Fox repeatedly declined several media outlet’s requests to comment on the lawsuit.

The two episodes featuring Lyon in jail – one which guest-starred comedian Chris Rock – were highly publicized as well as extremely profitable. Thirty-second advertising spots in the first episode cost $750,000, and spots in the second cost $600,000, according to the lawsuit. Fox sought dismissal of the class-action lawsuit against it, which was filed by legal guardians of two of the inmates in August 2016, claiming it was not responsible for the lockdowns.

RELATED: ?Empire? actor wonders where President Trump was on threats of violence against a president before his Snoop Dogg tweet

Judge Amy J. St. Eve – U.S. District Judge – ruled that the suit can move forward. The judge dismissed a claim that Fox infringed on the inmates due process rights, but allowed the claim that the network may be liable for “tortious inducement of breach of fiduciary duties,” meaning that Fox may have “colluded” with the prison’s administration to place the center on lockdown as they filmed.

The detention center has been described as “long-troubled” by the Chicago Tribune in 2015, the same year the episodes were filmed. The newspaper added it had a “reputation for being crowded, unclean and poorly staffed” and that it was often “blasted as a depot where children were locked up in violent, unsanitary, overcrowded conditions.”