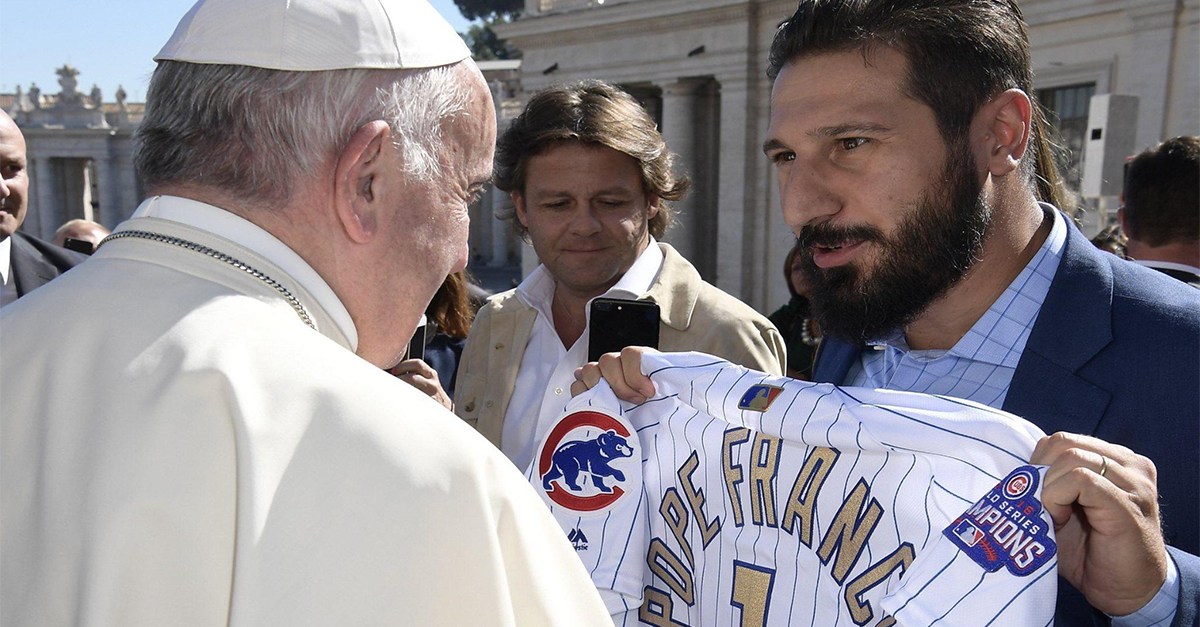 Even the Vatican knows about the Chicago Cubs historic World Series win. Though the pope is known to be more of a soccer fan, he now has the gear to become a Cubs fan if he wants.

And if Pope Francis truly has become a Cubs fan, it’s been by the hand of Margie McCartney.

The Cubs season ticket holder told Inc. she’s had various attempts at getting a customized jersey in the pontiff’s hands before the brother of a friend presented it to him on Wednesday.

“I knew Simon (Bossone) was going to be giving him the jersey, and I said to Salvatore (Bossone), ‘Be sure you ask Simon to tell him about this girl from Chicago, Margie McCartney, who’s this huge Cubs fan, who has tried twice to give you this jersey,’ ” said McCartney, 56, a global sales director for AlliedPRA. “And he said that he told him that, and (the pope) smiled, and (Simon) said, ‘I just want to make sure that you’re a Cubs fan.’ And the pope said, ‘For sure, I am.’ ”

Salvatore is a well-connected travel advisor whom Margie calls “Mr. Italy.” Earlier this year, she asked him to let her know if he could arrange for her and her mother, Joan, to have a private audience with the pope in late April.

Earlier that April, McCartney was talking about the planned visit to the Vatican to friends at a Cubs game. It was actually one friend’s daughter that gave her the idea to give the pope his own Cubs jersey. McCartney loved it and quickly asked a Cubs official if the team could provide one in a rush.

The team happily obliged, but the jersey got held up in customs and arrived a day too late.

McCartney moved on and decided to make the visit about meeting the pope, the thrill of a lifetime for her Catholic mother. “She goes to mass every day. She spoke to him in Spanish because he’s from Argentina,” McCartney said.

On her second attempt, McCartney gets another chance for a face-to-face with Pope Francis in September, but a mistaken seating arrangement thwarts her opportunity.

“The security at the Vatican made a mistake and put my niece (Madeleine McCartney), who had flown over from New York, and I two rows behind where we needed to be to give the pope the Cubs jersey,” she said. “So now two trips to Rome this year and it didn’t work out. But I wanted the pope to get that jersey.”

Third time proved to be the charm for Margie. This time, she leaves the jersey in Rome with her friend Bossone, who has his brother, Simon, hand it to the pope on Wednesday. (Last year, Archbishop Blase Cupich gave the pope a Cubs hat and a signed baseball.)

McCartney, who was scrambling to fly back to Chicago from Las Vegas in time to watch the Cubs play Game 5 of the NLDS in her Wrigleyville home on Thursday, was happy to see visual proof of the pope touching her Cubs-related gift.

Of course she wishes she could have delivered it herself in person, she even had a speech planned, one that also honored her late father, Chuck.

“On behalf of the Chicago Cubs’ fans, the millions of fans around the world, we’d like to thank you if you had anything to do with us winning the World Series last year. And I kind of felt selfish saying, ‘Could you help us do it again this year?’ so i wasn’t going to mention that.”

“And then I was going to ask him, ‘When you talk to your boss,’ meaning God, ‘if you could do me a favor and have him look for my father, Chuck McCartney. He’s probably hanging around on cloud nine because he was a really happy man. And just tell him that his family loves him and misses him every day.’ “