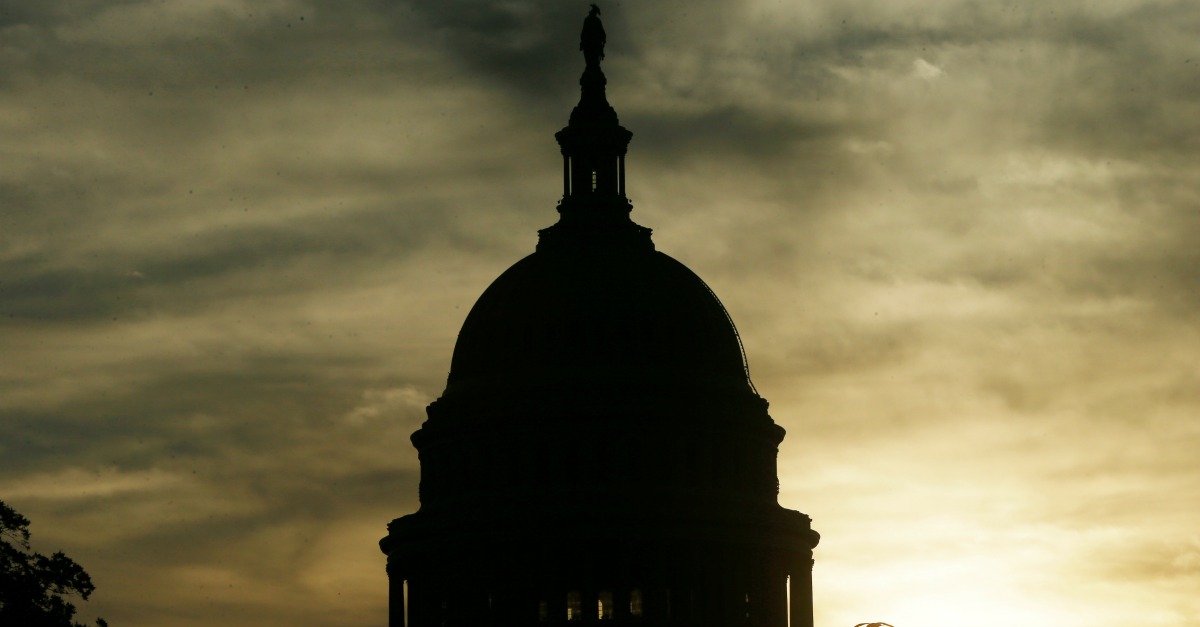 AP Photo/Charles Dharapak
The sun rises over the U.S. Capitol as Sen. Ted Cruz, R-Texas, continues his filibuster on the Senate floor in Washington, Tuesday, Sept. 24, 2013. Cruz says he will speak until he's no longer able to stand in opposition to President Barack Obama's health care law. Cruz began a lengthy speech urging his colleagues to oppose moving ahead on a bill he supports. The measure would prevent a government shutdown and defund Obamacare. (AP Photo/Charles Dharapak)

An effort by Congressional Republicans to develop an emergency, temporary stopgap spending plan reportedly leaves out $81 billion in federal aid to victims of Hurricane Harvey.

While the House passed a temporary package yesterday without the provisions potentially helpful to many displaced Houstonians, both chambers of Congress must come to an agreement on a spending plan by midnight Friday to prevent a government shutdown.

As part of the negotiations, and, as the House proposal awaits further consideration in the Senate for a possible full vote today, aids say the Harvey dollar package is being set aside as each party seeks funding for other priorities lawmakers see as more important than supporting those affected by the storm.

For instance, Republicans are reportedly insisting on funding for a wall along the U.S.-Mexico border, an alleged high priority item across the current Administration in their efforts to control undocumented immigration.

Furthermore, Democrats are reportedly negotiating for funding for a program meant to prevent deportation of residents illegally brought into the U.S. as children by their undocumented parents.

Nearly 1,400 miles away, Texas state and Houston city leaders are speaking out against the use of the aid package as a negotiating tool.

“The governor has been in frequent contact with leaders in Congress and the administration advocating the necessity for funding to rebuild Texas,” Abbott’s spokeswoman, Ciara Matthews, said in an interview. “He has received assurance after assurance. Yet, every day that goes by without funding is another day that Texans who have been upended by Hurricane Harvey go without the resources needed to rebuild their lives.”

Houston Mayor Sylvester Turner also spoke out about the political wrangling in Washington, saying how, if the final passage vote on the aid package is postponed, then the region will be left vulnerable to additional floods in the spring:

“And so to not vote on the Harvey relief package, let’s say on the 19th, and if it’s postponed another month, it’s just not going to put people in the best position to get prepared for the next storm,” Turner said in a statement on the matter.

RELATED: FEMA May Pay Texas Churches to Rebuild After Harvey

“I get more help from my Democratic mayor than I do from my Republican state officials and my Republican federal officials. That makes me sick,” Martin said.