Menu
Follow us
Search
Menu
Search
ELKRIDGE, MD - JUNE 19: Tacos from left to right are Al Pastor or marinated pork, lengua, barbacoa or lamb, and cueritas or pig skin. El Papi Real Street Tacos in Elkridge, MD is the next restaurant for the $20 Diner, scheduled for the June 23 issue of Weekend. The small restaurant owned by chef Jose Flores and Patricia Pineda is inside a Shell gasoline station.(Photo by Sarah L. Voisin/The Washington Post via Getty Images)

Just when you thought the Tex-Mex battles were over, a new conflict is coming to the forefront of food politics: Tacos v. Burritos.

Before you – or your gut – gets too excited – or nervous – about tasting all of these Houston staples, a study settled the competition with a look at the numbers.

RELATED: Battle of the Tex-Mex: Is Tex-Mex really disgusting? We think not

Datafiniti — the company which, earlier this year, claimed Chicago to be home to more “authentic” Mexican restaurants than Houston — is back with their ‘definitive’ look at tacos and burritos.

In Texas, like the nationwide trends, tacos far outsold burritos, while cities in the middle of the country and in the northwest preferred burritos. 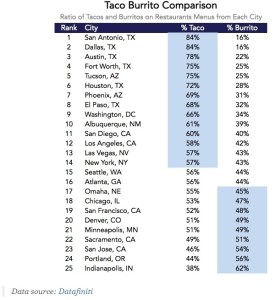 According to the study, Houston polled 72 percent tacos against 28 percent burritos.

All six Texas cities on the list featured more tacos, with only El Paso trailing behind Houston for percentage of tacos.

RELATED: Houston suburb has the most authentic Mexican restaurants per capita

Considering the prevalence of taco trucks and lack of burrito trucks, it, perhaps, makes sense tacos would win out in the Bayou City.

But, while Houston does boast plentiful delicious taco options, it’s worth noting Datafiniti’s claim of Chicago being home to more Mexican restaurants than Houston is widely disputed in “Crunch City.”

How could you really even choose between tacos and burritos anyway?