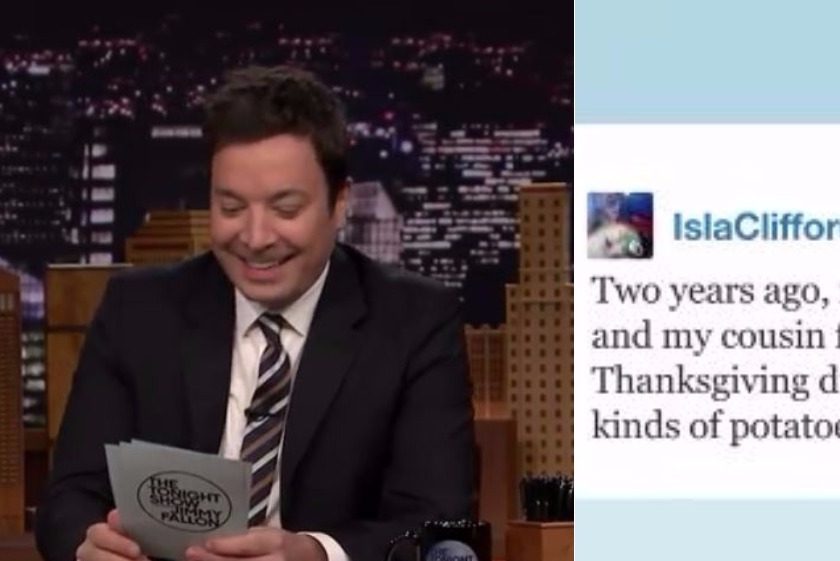 Leave it to Jimmy Fallon and his late night TV show to help his fans get over their Thanksgiving dinner fails during the holiday season.

The comedian and “The Tonight Show Starring Jimmy Fallon” host shared some of his fan-submitted Thanksgiving fails that will make you thankful that your dinner came out much better!

Jimmy Fallon Shares A Hashtag We Can All Relate To

Not even old grandpa got a pass when it came to some of these disgusting, yet hilarious fails!

“My grandpa was making mashed potatoes when his dentures fell into them. He stared right at me and after he put them back in, said, ‘Don’t you tell a soul,'” one fan wrote.

Uncles also weren’t immune from embarrassment when a fan wrote, “My uncle got so drunk that he tried cutting the turkey with the handle.”

One fan shared one hilarious fail that came at their mother-in-law’s expense during Thanksgiving meal prep.

“One year, my mother-in-law was making gravy. She poured the gravy in the strainer and forgot to put a pan underneath, and it all went down the sink!” the writer tweeted. Well, hopefully, the turkey wasn’t too dry after that!

Another shared an absolutely grotesque story of an undercooked turkey making its way to the dinner table.

“One year the turkey still had pink juice coming from it after cooking, but my dad said it was just ‘leg juice,’” one fan wrote in. “Everybody but me ended up with food poisoning.”

OMG, people! Use a meat thermometer!

Hopefully, your Thanksgiving meal goes off without any fails (or family drama!).