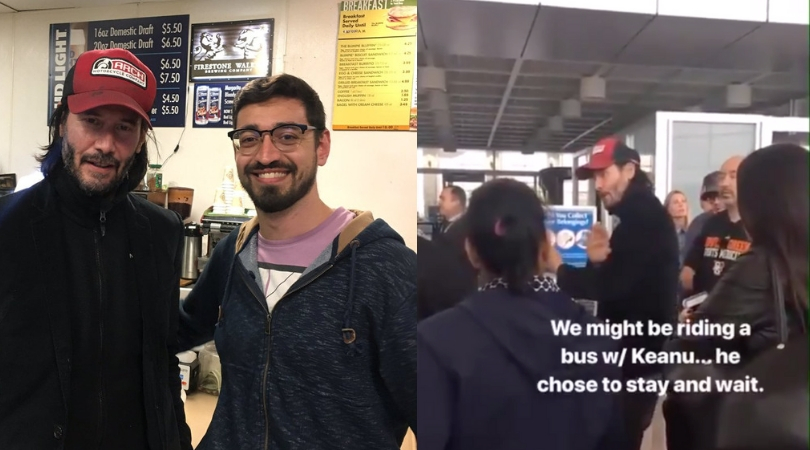 Yes, Keanu Reeves! Keep doing what you’re doing, because we are loving it! The actor decided to make some new friends this week, after his flight had to make an emergency landing due to “mechanical indication”, and proved to us that he is the ultimate Hollywood hero. Again.

The John Wick actor was traveling from San Francisco to Burbank in Los Angeles, when the United flight was forced to stop in Bakersfield. Being the nice guy he is, he decided to ignore the fact that he was a famous actor, and instead, began talking to staff to find a solution…for all passengers. Yes, Keanu to the rescue!

keanu got stranded somewhere in california and had to take a bus instead of a plane and some guy filmed the entire experience and i am BEGGING yall to watch this pic.twitter.com/I1TmLOEYiK

Reeves quickly figured the best way to complete the last 100 miles from Bakersfield to Los Angeles was by driving. So yeah, he decided to board a van with all other fellow passengers, because at that point, driving was way faster than waiting hours at an airport. Plus, nobody want’s to go back in an airplane after a scare involving a mechanical error.

Not only does the actor ride in what I can only presume was a hot uncomfortable vehicle with strangers, but he actively tried to entertain everyone by humorously reading fun facts about Bakersfield. Seriously, it was all caught on video! He is seen using his phone to look for information about the city and pulls up Youtube to play music that was native to Bakersfield. (Which in case you’re wondering, is country music created in the 1950s.)

Oh, but it doesn’t stop there. After a long day of traveling and chit-chatting with random strangers, The Matrix star decided to stop at Carl’s Jr. My guess is that he was probably looking for a little snack after entertaining people for a few hours. Or, maybe he just didn’t want people to see where he lived, which is pretty understandable. But, I’m going with the snack guess.

Honestly, this is both hilarious and so impressive at the same time. Reeves keeps reminding us that sometimes, the rockstar life doesn’t have to be so rock and roll ALL the time, and he doesn’t care about it at all. He’s just a regular dude who just wanted to get home and get a tasty burger.

That time when your flight out from #GDC almost crashes and you have to emergency land in a remote airport but at least Keanu Reeves is having as bad a day as you are. pic.twitter.com/XSPa1wlNuO

He’s the perfect road trip buddy, for sure. Seriously, not only did the guy help everyone get home by trying to find the fastest option, but he read to them, took pictures with them, and kept them entertained for 100 miles! Geesh, he’s living the life and I’m all for it.