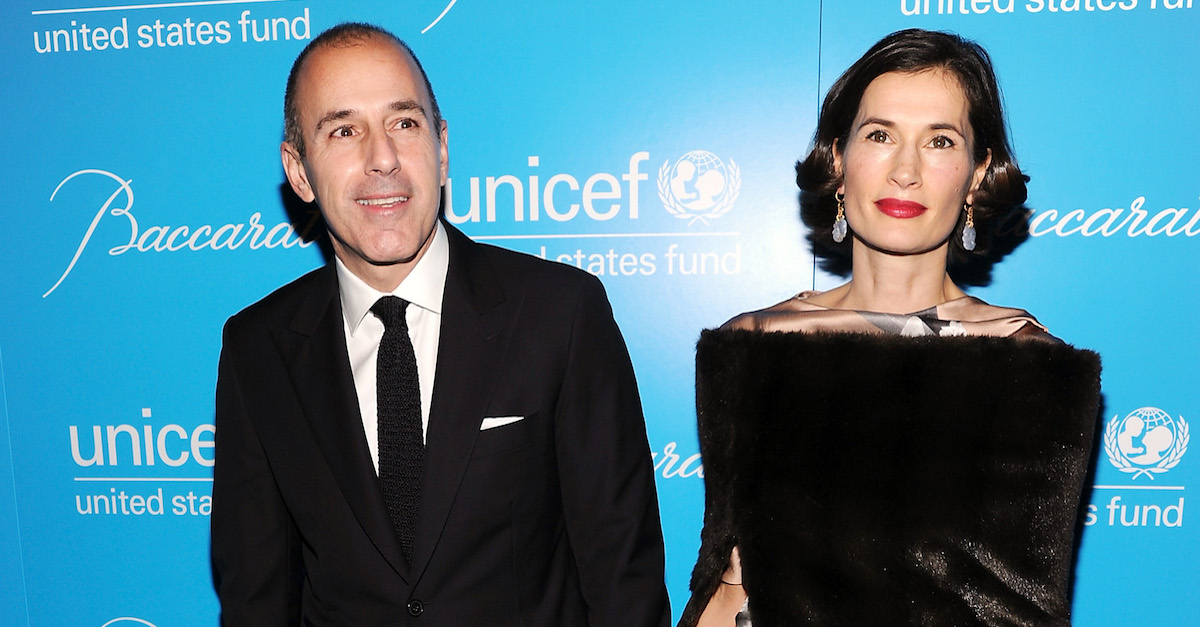 If Matt Lauer is holding out hope of fixing his marriage by wearing his wedding ring, his wife certainly isn’t. Annette Roque, the wife of the embattled anchor, was recently photographed stepping out without the telltale symbol of her relationship.

RELATED: Media figures knew the rumors about Matt Lauer for years ? and told some disgusting jokes about him

Roque, 52, was photographed shopping without her ring as her father confirmed news that the relationship is completely over.

?She is not going to stay with him and work it out. They are not together trying to work it out,? her father, Henri, 76, told the Daily Mail from his apartment in the Amsterdam. ?I have no words for her husband. What he has done is bad. Everybody feels betrayed.”

Lauer’s soon-to-be ex-in law’s statement corroborated long whispered rumors that the relationship was finished since news of Lauer’s sexual misconduct allegations from several women led to his firing from “TODAY.” As it turns out, the relationship was very near finished long before his alleged sexual antics were revealed.

According to the tabloid, Roque filed for divorce as early as 2006, at the time citing ?mental abuse, extreme mental and emotional distress, humiliation, torment, and anxiety.? That filing was dropped reportedly due to a through a rumored $5 million payout, which an unnamed source said may have happened to preserve Lauer?s ?America?s nicest dad? image.

“He is, in fact, a great and very doting dad to his kids,” said the insider, “but he is also a terrible husband.?

RELATED: There?s one thing about Matt Lauer?s appearance in public that everyone is talking about

The pair have reportedly been living separately since 2011, with Roque and their kids staying in the family home in the Hamptons while Lauer lived in Manhattan, visiting on the weekends.

Curiously, Lauer, 59, surfaced amid his ongoing drama still wearing his own ring behind the wheel of a Jeep Wrangler on his way to drop off 11-year-old son, Thijs, at school.

A source told Page Six that Dutch-born Roque had taken their two younger children to live with “family in her native country,” but her dad clarified that the rumors of her fleeing America were false.

While Roque has seemingly been done for a long while, his first wife Nancy Alspaugh, was shocked about the allegations against him.