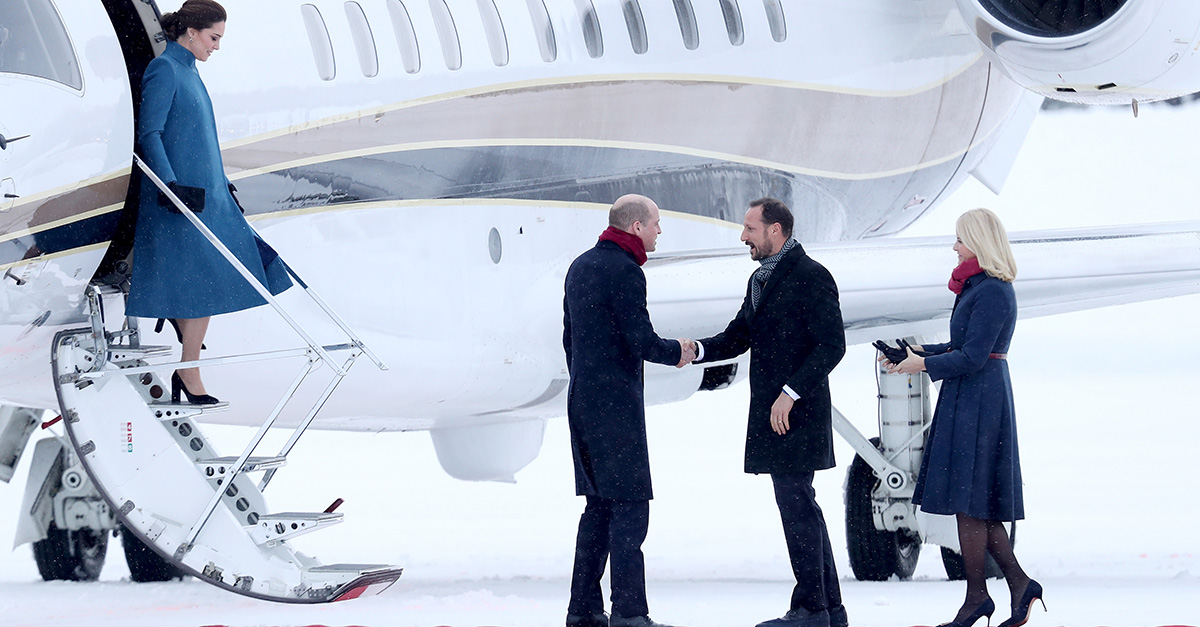 Prince William and Duchess Catherine were forced to change their plans in the final leg of their four-day tour of Norway and Sweden due to heavy snow in Stockholm on Thursday.

The couple were slated to visit the Uppsala Airbase on the east coast of Sweden but announced that the bad weather caused them to skip the morning meeting and head straight to Norway.

“Unfortunately the snowy weather in Stockholm today has meant that [their royal highnesses’] travel plans have had to be changed. This morning?s engagement at Uppsala Airbase will not go ahead,” Kensington Palace tweeted early Feb. 1.

Unfortunately the snowy weather in Stockholm today has meant that TRH’s travel plans have had to be changed. This morning’s engagement at Uppsala Airbase will not go ahead.

Before heading to Norway, William and Catherine met with Defense Minister Peter Hultqvist to learn more about the Swedish armed forces before thanking the country for their hospitality.

The Duke and Duchess of Cambridge this morning received a briefing on the Swedish Armed Forces from Defence Minister Peter Hultqvist #RoyalVisitSweden pic.twitter.com/bsJnkSqrSa

A fantastic couple of days in Stockholm! Thank you to everyone who made The Duke and Duchess feel so welcome 🇸🇪 #RoyalVisitSweden pic.twitter.com/LdawnNrbED

William and Kate then jetted off to Oslo, where they were greeted by the Norwegian Royal Family as they made their way into the snow covered airport. Crown Prince Haakon and Crown Princess Mette-Marit were among the first to greet the couple.

RELATED: Nothing is cuter than pregnant Duchess Catherine challenging Prince William to a shootout on the ice

The Duke and Duchess are greeted by Crown Prince Haakon and Crown Princess Mette-Marit of Norway on arrival at Oslo Gardermoen Airport 🇳🇴 #RoyalVisitNorway pic.twitter.com/QKcDVpZi5L

Anyone else getting “Frozen” vibes?

Once out of the frozen tundra, the couple posed with the Norwegian royal family, including King Harald V and Queen Sonja for one official royal portrait.

The Duke and Duchess of Cambridge are welcomed to Norway by the Norwegian Royal Family 🇳🇴 #RoyalVisitNorway pic.twitter.com/8L96JeEtup

The couple will spend the first day in Norway meeting with many Norwegian and U.K. companies in an Oslo co-working space called MESH and hear about some of the startups in the country. They will then enjoy a state dinner at the Norwegian Palace. The Daily Mail reports that on the second day of the trip, William and Catherine will visit Hartvig Nissen School, which is the location for a popular television teen drama series “Skam.” William and Kate will rub elbows with some of the stars and producers of the series before meeting with students at the school to talk more about social media and what challenges that brings to teens in today’s age.

William will fly solo during one of the couple’s outings, as the pregnant Duchess will stay in for one of the events to rest. The couple are expecting their third child together, due in April.