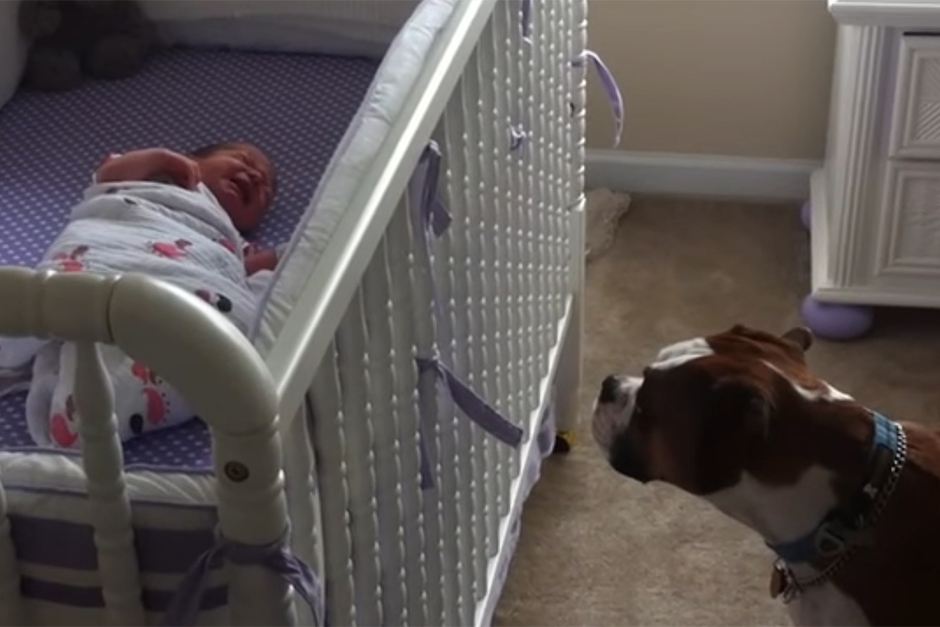 When these new parents first brought their daughter home from the hospital, these parents weren’t sure how their dog would react to the new family member.

“Would she be jealous? Protective? We knew she would be a great family dog but we didn’t expect this!” they wrote on YouTube.

This Fur Baby was Upset by its Crying Baby Sister

Their surprise came on baby Malina’s first day home, when they found Bella keeping watch under the newborn’s crib, almost acting as her guard dog during the day and in the middle of the night. When baby Malina cries, Bella the boxer cries, reacting to the new baby sounds as if a dog trainer had taught it to.

When the scene opens the silent camera moving in toward the crib is a little creepy. But then, when the curtain or skirt or whatever is pulled back to reveal our silent sentinel dog we know everything is going to be OK. It’s Bella to the rescue. Bella the empathy dog. Reacting to a baby’s cry at a moment’s notice? Where’s her cape?

“The dog and baby are best friends and Bella follows Malina everywhere,” Malina’s parents wrote on YouTube. “Bella sleeps in her room most nights and is the first to alert us when she’s upset.”

Dog behavior being what it is we can’t know for sure exactly what Bella’s motivation is when she hears the baby noises. Maybe she’s just saying “Hey, that little human thing is making noises again and I’m trying to get some sleep. It’s time for you to put her in the car sat and drive around for half an hour.”

We’re going to give Bella the benefit of the doubt here. (We’re not behaviorists. We don’t read dog body language that well.) Some dogs howl along with sirens so why shouldn’t at least one dog cry along with babies. What’s that saying? Laugh and the whole world laughs with you but when the baby cries go get mom and dad. They have opposable thumbs and super powers. Also food.

“The two of them are too cute!”

This article was originally published May 4, 2015.