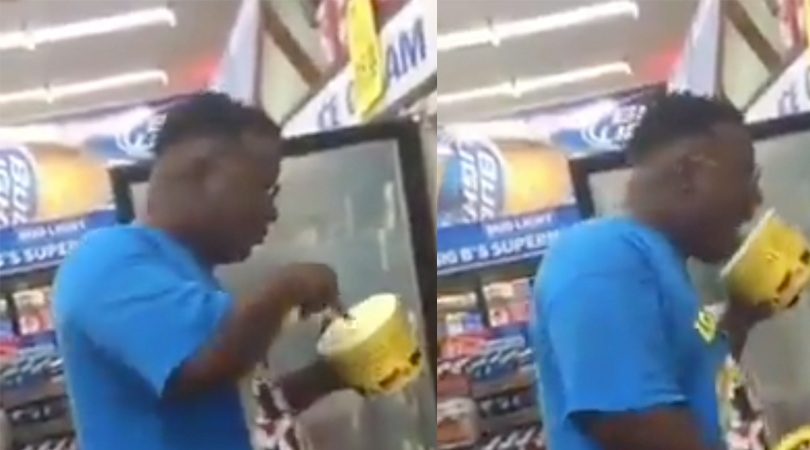 The Blue Bell ice cream licker, like a serial killer or teen challenge about how many baby carrots you can fit up your ass, has officially spawned copycats. And we’d all be so much better off if these people had decided to murder or commit micro-sodomy on themselves dozens of times in a row and left the innocent Blue Bell ice cream alone.

But here we are, living in a world where filming yourself opening tubs of ice cream in the freezer section at the store and licking the ice cream within is a thing. We’re all the worse for it. Lock these monsters up and throw away the key. Oh, and only allow them to lick their meals. The latest ice cream licker is out of Louisiana. He, like the original dairy terrorist, violated a tub of Blue Bell.

This done gotten out of hand. Now his old ass should know better🤦🏽‍♀️@ILoveBlueBell @WAFB @Kiran_WAFB pic.twitter.com/TKX0jUikok

Fortunately, the man, Lenise Martin III, was arrested by Assumption Parish Sheriff’s Office and charged with property tampering and posting criminal activity. For what it’s worth, though, Martin did prove to police that he actually bought the ice cream he licked (and poked, which… barf). It was all a stunt. He was just doing it for the lawlz and the likes.

So should Martin be charged? Sure he vaguely sexually violated a tub of ice cream, but it was his ice cream. Do we not live in America? Can a man not do what he wishes to his property? On the flip side, his video could encourage more people to do gross stuff to food for their own lawlz and likes. How long before someone deep throats a 7-11 hot dog and puts it back. Yeah, that’s probably already happened to 10% of all 7-11 hot dogs ever cooked, but how long until someone films it and we know that it happened for sure?

It’s probably not likely the charges stick, but hopefully the mere fact Martin was arrested for it will deter future awful people from tongue-punching our deserts.