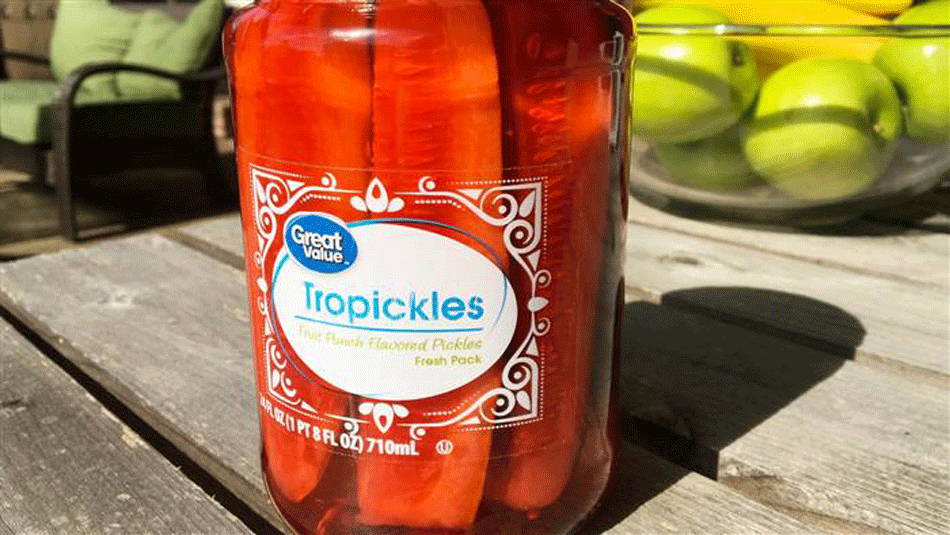 Toss a pickle on a hot dog. Add a few slices of hamburger pickles to, well, a hamburger. Get that hoagie with some salt and vinegar potato chips and a giant dill spear wrapped up in butcher paper, sealed tight with some thick white tape. Never, ever, however, soak your pickle in fruit punch. Walmart is doing way too much right now, and they’re trying to get us to eat these fruit punch Tropickles.

What are Tropickles? They’re fruit punch flavored pickles. Are fruit punch pickles are modern-day couple pairing in the food world? Pickle addicts might say yes. While a real social media trend right now, Walmart’s Great Value brand might have gone too far this time. Or maybe not.

Pickles start as cucumbers; there’s no doubting that. They’re traditionally soaked in salt, vinegar, some garlic, a little dill, and other non-fruity things. Bread and butter pickles are a bit on the sweeter side, but by no means would we ever want them in a cocktail on a tropical island. Walmart is apparently trying to change that notion.

The Tropickle, as it’s so grotesquely called, is what it looks like. There are spears of cucumber floating in red fruit punch. Found on Walmart store shelves exclusively at Walmart locations throughout the country, from New York to Texas, these faux Kool-Aid pickles are causing a big stir. I mean, tropical-flavored pickles, what is life?

We’re half expecting the Kool-Aid man to burst through the wall behind us right now. If these Tropickles exist, he must exist too. We may live under a rock (probably the same rock that the Kool-Aid man lives beneath), but apparently this concept isn’t new. Today cites “the marriage of dill pickles and fruit punch”as something that’s existed in the US for quite some time.

Southern states supposedly love them and consider them officially Southern classics. They even include their own shout out to the Kool-Aid man, providing a video tutorial on how to make “Koolickles” or Kool-Aid-soaked pickles.

You won’t break the bank making your own Tropickles or Koolickles or whatever-you-want-to-call-them. The ingredients are cheap, and a pre-made jar is only two dollars American. That’s a total steal! If you’re looking for new pickles to try, maybe these should make their way into your cart if you’re not ready for the DIY versions.

We’ll do our pickles on sandwiches. We’ll toss down a pickle back shot, have a Bud Light, and then another two or three pickle back shots. What we can’t see ourselves doing, however, is learning to love the Tropickle. But hey, that’s just us. Give us a new reason to try it for convincing, and maybe we’ll join the rank of weird food enthusiasts everywhere.

For now, we’ll check our Instagram feeds to see how the public responds to Walmart’s great new pickle ideas that might change the way we eat them forever.

Watch: The World’s Hottest Pepper Can Kill You