You Know That Fountain of Youth? It’s Still Open 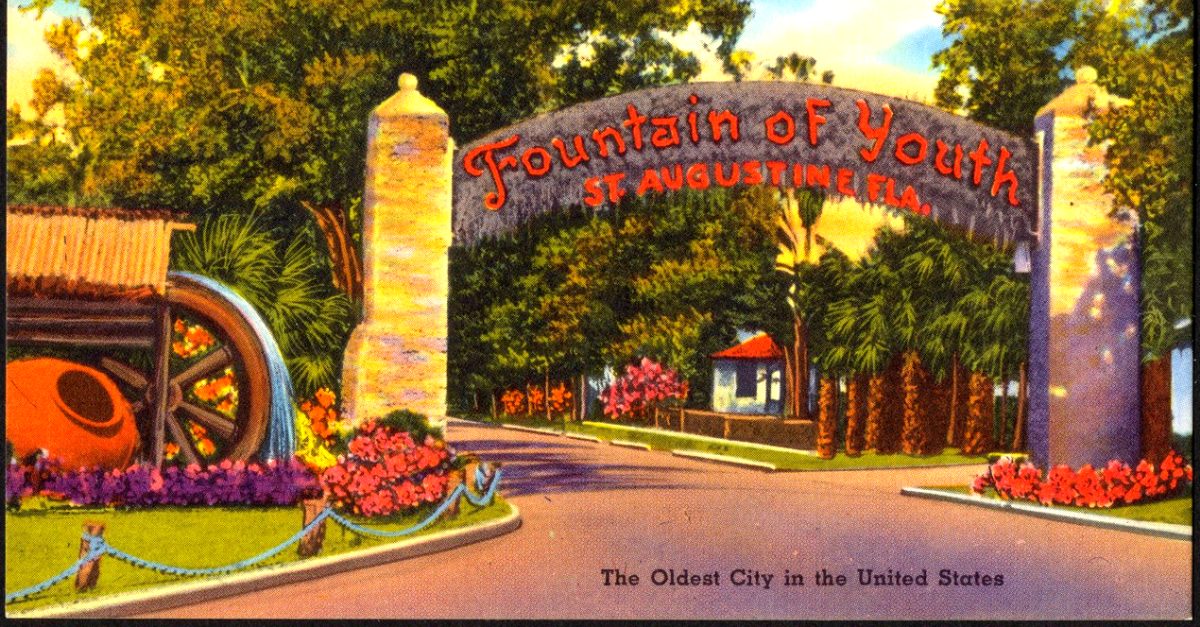 It’s true. (Juan) Ponce De León?s Fountain of Youth Archaeological Park is a tourist attraction park in St. Augustine, Florida that shows the 16th century Spanish settlement. The park was created in 1904 by Luella Day McConnell, known as ?Diamond Lil? for the diamond rings she wore on her fingers. Diamond Lil, a doctor turned adventurer during the Klondike Gold Rush, established the attraction on a 15-acre plot of land, located where Spanish explorer and conquistador Juan Ponce de León first landed in the United States in 1513. That’s all just fine, right? A story you’ve heard before. Does it change when I tell you that Ponce de León wasn’t actually associated with the Fountain of Youth until after he died?

According to Gonzalo Fernández de Oviedo, Spanish historian, Ponce de León was searching for the Fountain of Youth to cure his aging when he set out for Florida in 1513. He was leading the first known European expedition to what was known as “La Florida”. Before, though, Ponce De León made a trip with Christopher Columbus for his second voyage to the New World as one of his “gentlemen volunteers”. He also sailed to Puerto Rico in 1508 and served as the first governor of Puerto Rico by the Spanish crown, or Monarchy of Spain. However, he was in an ongoing legal battle with Diego Columbus, Christopher Columbus? son, over who would govern the land.

This journey in 1513 is the first record that he was in search of the alleged natural spring that promised eternal youth, but Ponce de León didn’t actually write a word about seeking the fountain of youth. The story of the spring or mythical fountain is common in early literature and dates way back to Herodotus, a Greek historian). The legendary fountain of de León was said to be on the island of Bimini. However, instead of Bimini, he landed on the coast of Florida, inhabited by the Calusa, a Native American tribe. When fighting over land broke out, de León was injured and definitely never found a fountain of youth.

Diamond Lil’s Fountain of Youth Archaeological Park is as brilliant an idea as the story of the actual fountain. The park was promoted as “Florida’s First Tourist Attraction?. Here they claim to have unearthed many ancient artifacts dating back to when Ponce De León’s arrival in Florida. The park includes peacocks, a planetarium, a boathouse and numerous exhibits. It?s an exciting place to explore, but don’t bank on the youth. There is, of course, a “fountain” on the grounds, which tourist are encouraged to bottle water from and take home (for a price, initially 10 cents a cup and more now), While the ?fountain? is actually a natural spring, people are into the spirit of the place. A burial pit of Timucuan skeletons was found on the grounds in 1934. They named it was the “first Christian Indian burial” and a covering was built to protect it. A mural was made to commemorate it.  Check out the park to plan your next wedding, birthday, event – or to keep turning 21 forever, no judgments from us!