Howard Zane’s entire life is a testament to artistic expression. He’s a musician — banjo, fiddle and guitar — and painted until “it wasn’t rewarding” anymore. But model railroading is his one true love.

“Model railroading is a multidimensional art, which is very challenging,” he says.

Those dimensions include the work that goes into designing the trains and surrounding scenery; the actual modeling; the trains’ movement; and the sounds. Some modelers take it even further by adding “the sixth dimension… odors you can purchase, coal yard, coal smoke, lumber yard.”

Zane began model railroading in 1983. He drew his early inspiration from the beautiful mountains of West Virginia. Now, he designs his model buildings in a style he created and calls “Appalachian Gothic.” 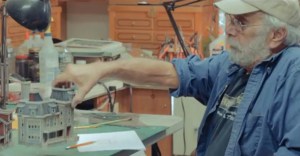 “This style doesn’t exist, but it exists in my mind,” he says. “This will be sort of like an Appalachian Gothic style you would see possibly anywhere in West Virginia, East Tennessee, whatever… Everything is built out of wood and some styrene parts, but nothing is kit built.”

Zane originally planned to be a doctor, “but I found out [pre-med] wasn’t for me, so I dropped out of that. Actually, I didn’t drop out of that — school dropped me out,” he jokes. He eventually attended Parsons School of Design in New York City, then did postgraduate work at the University of London. He returned to the United States to work on John F. Kennedy’s presidential campaign.

While he “accrued several thousand flying hours” during his eight years in the U.S. Army and 10 as a professional corporate pilot, Zane “found that there was no artistic accomplishment in flying an airplane.” With his wife’s blessing, he dove headfirst into the world of model railroading and never looked back.

“My wife is very, very supportive, mainly because she knows it’s important to me,” he says. However, she’s not a fan of all his hobbies: “My wife will not let me play the fiddle anymore, nor will my cats let me play it.” 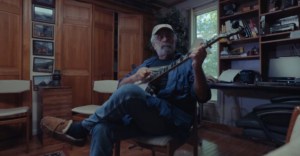 For decades, Zane has built models for both customers and himself, namely his own “railroad empire,” Piermont Division. He also inspires others to pursue their own passions.

“Some people may say it’s a talent,” he says of his work. “No, it’s just a matter of wanting to do it. You’d be amazed if you tried it. So many people say, ‘Hey, I can’t do that,’ which comes back to the intimidation factor. Choose between intimidation or inspiration. If you’re inspired, you can do it.”

“A good analogy would be like, if a shark stops swimming, it’s going to die,” he adds. “It’s the same. If I can’t build or do anything with my hands, I may as well cash in.”

See some of Zane’s work at zanestructures.com.