America’s Got Talent aired at 8 p.m. Tuesday, September 5 — it’s first semi-final. After 18 episodes, just a few acts have made it this far. They’re so good, with so many different stories, America is facing some hard choices. Simon Cowell was flanked by judges Heidi Klum, Howie Mandel and Mel B., who appeared to utter a profanity on live TV during a magic performance (Thanks for the delay, NBC). The network also turned up the waterworks with heart-wrenching stories of pain and redemption.  The most touching moment — 13-year old Evie Claire, a sweet child singing for her dying father so he could have one more loving moment in a life that’s now, sadly, short of them. It was so powerful even Simon got emotional on live TV.

Some 12 acts performed tonight, and on Wednesday, five will find out who made it through to the finals

She’s been a bit up and down during the entire competition, so it’s a little surprising she got through to the AGT semi-finals. She did fine with  Ed Sheeran’s “Make It Rain,“  Love on the Brain was good, but iher last performance, in the live rounds, left Mel B. that. Speaking of flat, she seemed to be just that in a few places during Say you won’t let go, but the judges didn’t seem to mind, and they raved about her. Solid performance, but the others coming up are — wow.

Areosmith? For a Gospel Choir? That’s what the 39-member Greater Works choir did during the AGT semi-finals. When the judges encouraged acts to being their A-game, and step it up, that’s what Greater Works did. After he gospel classic, This Little Light of Mine, and the stirring Ain’t No Mountain High Enough, they took I don’t want to miss a thing, and while it started slow it ended strong when the group gave it a real gospel sound. That’s what made the judges and the crowd stand up. DaNell Daymon and others in his chorus broke down as the crowd gave an extended cheer. “I don’t know what it is about you guys, you just get me every singer time,” Simon said. “I think you’re the life and soul of this show.” We’ll see if America agrees.

The 26-year-old funny man has been honing his craft for eight years and at one point was homeless as he pursued his craft. Preacher Larson  has been consistently outstanding and original, a ball of every that attacks every joke with the gusto of a child eating candy. Tuesday’s AGT semi-final was no different, as Larson was his manic, side-splitting self.

“Why have you not got your own sitcom? Why aren’t you doing major, major gigs?” Simon asked. I’m not sure there’s room for a comedian in the finals, but if there isn’t, there will be room for him in comedy clubs around the country.

Such a tremendous voice in a competition of tremendous voices. His best performances have come when singing songs made famous by female singers — Whitney Houston’s I Have Nothing  and And I’m Telling You, — the Dreamgirls classic sung by Jennifer Hudson. He took a huge risk during AGT’s semi-finals doing an original song, so he could show the world who he really is. What he is, is tremendous. But little things matter, and this time, the judges didn’t stand up, because they weren’t that impressed. Howie said he should have stayed in his lane and done another diva-like song, and the rest of the judges were lukewarm. Taking a risk is part of life, and he certainly took one — and it may get him booted out of the competition.

Billy, 30, and Emily,27,  think what they do is like ballet — crazy ballet. On roller skates, they spin and twirl at up to 40 miles per hour.  They brought their spinning act to the AGT semi-finals and they are most original act left, a combination of death defying moves and daredevil actions. “It was stunning, it was brace, it was terrifying, it was amazing,” Simon said. It was something else — an act that should make it to the finals.

Sara Carson and her dog, Hero

Simon’s show crush is back. Remember, he saved Sara and Hero during their first performance and has been a staunch supporter ever since. Sara and Hero were a TON better during judges cuts, and during the AGT semi-finals, they were back with another fun act. Sara loves her dogs, and they love her, and it comes through in their act. This time, Hero performed mock CPR on Sara during a beach theme. She’s no doubt the feel good act in the competition. “America, we need these dogs in the final,” Simon said. Heidi was right when she said the act is beyond cute.

It’s tough on musicians on these shows. You have to separate yourself and be really original. Chase Goehring, a 21-year-old singer/songwriter from a small town in Tennessee, has blown originality out of the water. He’s done nothing but perform original songs, and they’ve all been excellent. He’s latest, What is love, continued that originality. He’s the one who has a real chance of making it through either an old-style record contract or via iTunes. The question here is whether he’s style of music will result in America pushing him through to the finals. Again, visual cues matter and Simon was the only one who stood and applauded, even though the other judges praised him.

Whether she wins or not, 12-year-old ventriloquist, Darci Lynne Farmer has one hell of a career in front of her. She’s funny, with a polished act, and she better with her mouth closed than most people do with it opened. She also makes her own puppets and thinks up the stories behind them. She had a Golden Buzzer performance with Summertime, followed by a tremendous  Who’s Lovin’ You. This time, she did a skit around, “You make me feel like a natural woman,” all for Simon, and it was spectacular. If she doesn’t get through to the final it’ll be a major upset. “This was brilliant,” Simon said.

Young sings in the subways of New York. That’s not where he started — he worked at the parks department on Coney Island, but he quit his job and now, for the last 37 years, he’s made his living singing down below. We’ve sen him do Unchained Melody, and, it was A Change is Gonna Come by Sam Cooke.  For the live show, it was another Ed Sheeran song (he’s a popular guy) doing “Thinking Out Loud,” and he did everything that got his this far — a powerful voice that was sometimes off key, always raw, and generally strong. Now, during the AGT semi-finals, he once again showed he has the most powerful, raw voice left in the competition. But with just five spots going through, it wouldn’t be a surprise if he didn’t make it through — though he should. “It was raw, it was real, it was authentic,” Simon said.

America’s Got Talent Season 12: How to watch, TV info for Wednesday September 6, 2017 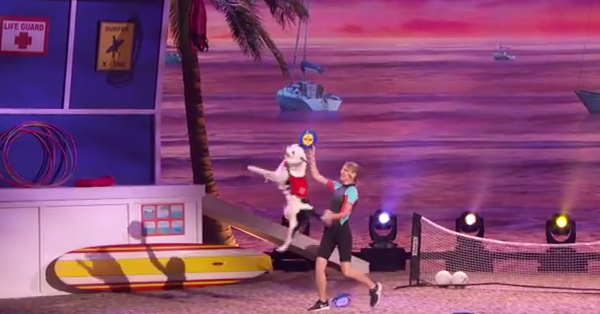