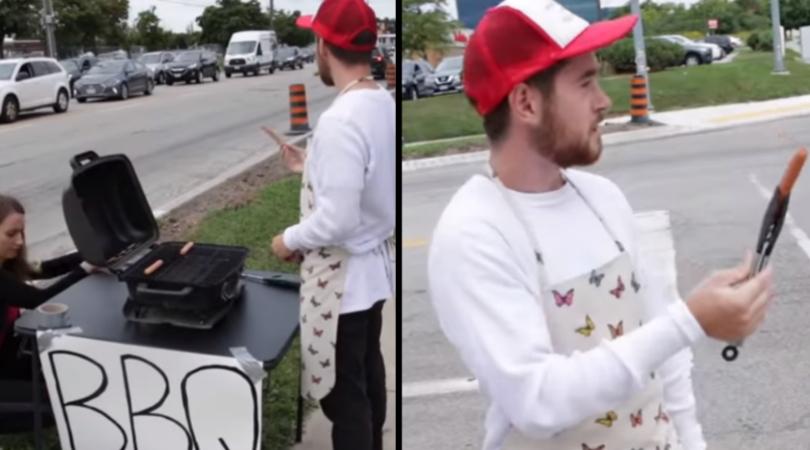 It’s safe to say that PETA has been in the middle of some wild controversies throughout the years. The activist group is known for going to extreme measures believing in animals and their will to live. Personally, I am a strong believer of animals and respect the group’s believes, but sometimes, things just get a little too carried away when it comes to the debate of animal lovers vs. animal eaters.? We always see meat-lovers clashing with vegans about their lifestyle, never coming to a conclusion, so it starts the debate all over again. Anyways, this is not about PETA, sorry about that. BUT, it does involve animal rights activists, so close enough.

You see, in Canada, activists are known to protest at Fearman’s Slaughterhouse by holding animal vigils in the streets. These individuals usually stop transport trucks carrying pigs that are being taken to the slaughterhouse, and give each animal water and comfort before their last moments. Sometimes, these protest can lead to a confrontation with angry truck drivers who don’t know what exactly is in the liquid, and worry it might contaminate the livestock. As a way to ?protest the protesters, one man decided to confront and troll the animal rights activist by barbecuing hot dogs across the street.

Yes, the man took his own grill, his food, and a group of friends to help him protest. The stunt was filmed for a YouTube channel called Pathetic Millennial, and it?s safe to say the internet was outraged by their actions. One of the activists is seen drawing the attention of the group across the road, who are giving the hot dogs out for free to anyone stopping at the light, and even offering the activist some.

The entire stunt was filmed in a seven-minute viral video and has been watched more than a million times, causing debate around the world. The video opens up in what appears to be a Snapchat video of the animal protesters outside their ?pig vigil,? urging users to ignore the man barbecuing. The video then shows the man responsible for the barbecue, setting up his stand right across the protesters. Needless to say, the animal activists were appalled at the whole situation, threatening to call the police.

The man and few of his friends said they organize the barbecues outside the slaughterhouse regularly, at the same time when the animal?s rights activists host their protests to prove a point. By the look on his face, it seems to be he takes joy in the fact that he’s grilling the meat in front of the people, showing them they also have a right to eat meat, and not be judged for their actions. Eventually, after hours, the man gives up saying he will be back to antagonize people again.