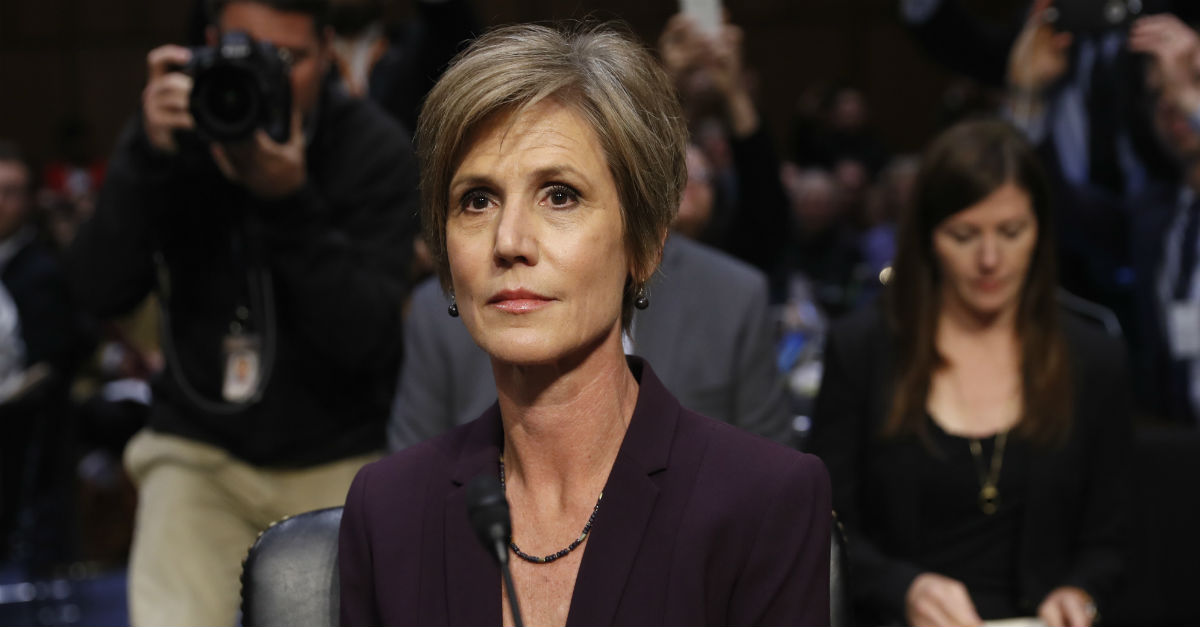 Former acting U.S. Attorney General Sally Yates was fired by President Trump in January after she refused to enforce his travel ban. Yates ordered the Department of Justice (DOJ) lawyers to not defend the executive action.

During a Monday hearing about former National Security Adviser Michael Flynn and potential collusion between the Trump administration and Russia, Yates faced a question from Sen. John Cornyn (R-Texas) about the decision that led to her firing:

Former acting AG Yates on decision not to defend travel ban: "All arguments have to be based on truth, because we're the Dept. of Justice." pic.twitter.com/GjKbsnvt2j

RELATED: Long before she was fired by President Trump, Sally Yates was asked whether she could ever say ?no? to the president

Yates explained that she decided to overrule a legal decision regarding the travel ban because the Office of Legal Counsel was designed for a very narrow purpose, one that did not leave much room for an in-depth analysis of Trump’s executive order.

“In this instance, all arguments have to be based on truth, because we’re the Department of Justice,” she said.

When asked by Cornyn if she had distinguished truth and the law, Yates said that she had: “In this instance, in looking at what the intent was of the executive order, which was derived in part from an analysis of facts outside the face of the order, that is part of what led to our conclusion that it was not lawful.”

Cornyn said that he supported Yates’ confirmation because of her service but expressed his disappointment in her actions:

Yates responded to Cornyn’s sentiment by reminding him of an exchange she had both with him and several of his colleagues during her confirmation hearing. Yates was previously asked if she would ever say no to a president should they ask the Department of Justice to carry out an unlawful act, an unconstitutional act or an act that would reflect poorly on the department.

Yates then explained: “I looked at this. I made a determination that I believed that it was unlawful. I also thought that it was inconsistent with the principles of the Department of Justice, and I said ‘No.’ And that’s what I promised you I would do, and that’s what I did.”