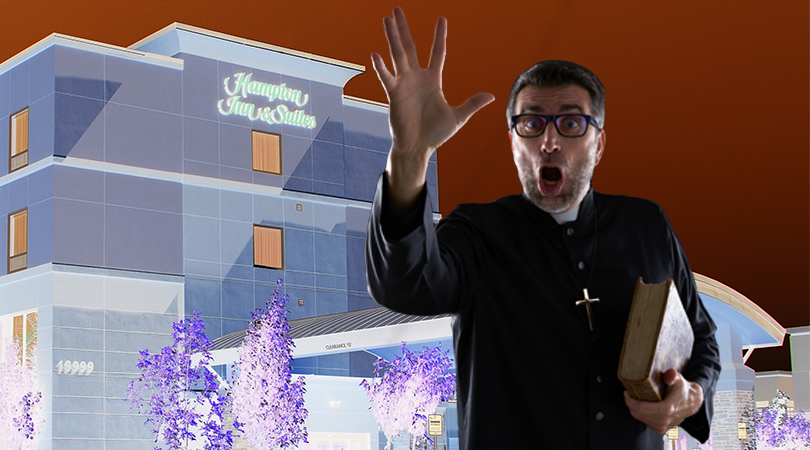 It’s perfectly reasonable to demand that an employee address issues they have that are affecting their work. If a hotel employee happens to be possessed by a demon, for example, that would unquestionably require attention. You can’t have one of your workers vomiting blood into the swimming pool, or crawling on the ceiling and hissing curses at guests in Aramaic, or delivering guests both towels and news about what their dead moms are doing with their mouths in hell. That’s just not what people come to the Hampton Inn for.

Of course, if you’re going to accuse an employee of being possessed and demand that they do something about it you should probably have some pretty solid examples to cite. You can’t really just toss that accusation around casually. It’s not a “your lunch breaks are running too long” sort of concern.

According to plaintiff Jason Fields that’s pretty much exactly what happened to him while he was working at a Hampton Inn in eastern Kentucky. Fields’ boss, Sharon Lindon, learned that Fields was going through a divorce when he started working the front desk at the hotel in 2016. Lindon told Fields that she believed the divorce was the result of his being possessed by demons. She told Lindon that if he wanted to keep working at her Hampton Inn he would need to undergo an exorcism.

Lindon attempted to force Fields to fill out a questionnaire about his religious beliefs and sex life as a sort of pre-exorcism informational exercise. When Fields refused Lindon had members of her church come to the hotel and pray for Fields, often in front of customers and guests. Fields claims in the lawsuit, which he brought against Lindon, Hampton Inn, and the Employee Resource Group in the Perry Circuit Court in March, that this affected his work and ultimately forced him to quit. Fields also claims that his refusal to undergo an exorcism affected how Lindon scheduled him.

This was all spurred by a divorce? Really? Did he even put a crucifix up his butt? At least let the guy crudely carve some pentagrams into his stomach with a broken piece of glass or have sex with a goat before you start dropping E bombs.

Watch: A crowd stood by and watched as a mom stripped her child naked and bit her during an ?exorcism?