Jude Lenamon is very much a real person.

A 15-year-old high school freshman, he really was in his Junior Army Reserve Officers’ Training Corps (JROTC) cadet uniform the morning of Feb. 14 and in formation during second period. Three of his friends were lining up for the last time, though none of them knew that yet.

He really turned to a teacher, after being herded outside for the second fire alarm of the day — this one 10 minutes before the school day ended — and said, “Don’t those sound like gunshots?” And he really helped classmates through a small gate in the 6-foot tall fence between Marjory Stoneman Douglas High School and West Glades Middle School, where his 12-year-old brother, Gabriel, was locked down in a classroom. He has a real family — a mom, a dad and two younger brothers — who really could have lost him that day.

He really knew four of the students who died. Two were good friends from the JROTC. Another very close friend who also plays hockey was struck by bullet fragments “once in the back and once in the leg. But he’s okay, thank God,” Lenamon says.

Lenamon has very real intentions of growing up to be a naval aviator, hopefully after attending a military academy. It would be a logical path for someone who has been fascinated by law enforcement from a young age, cluing his second grade teacher in to gaps in the playground perimeter at recess, his mother says, and always seeing all available exits from a room, Jason Bourne-style.

But at 15, he really is too young to have friends with bullet fragments in their backs. To hear a friend and teammate say, “Jude, I got shot.” To have lost friends, teammates and peers to an assault weapon better suited for a battlefield than the idyllic South Florida suburbs.

Peter Wang, another 15-year-old JROTC freshman, was last seen by his friends in uniform, holding doors open to help hasten the escape of others — the kind of act that, if performed on a battlefield, would get someone a Bronze Star. He and two other JROTC cadets killed in the shooting, Alaina Petty and Martin Duque, both 14, were awarded the Heroism Medal this week. Wang was posthumously admitted to West Point Wednesday, the same day he was laid to rest. Like Lenamon, a close friend, attending a military academy was his dream; Wang would have been a member of the U.S. Military Academy’s Class of 2025.

And like Lenamon, Wang, Petty and Duque were very real high school students caught up in the mass shooting at their school in Parkland, Florida, that left an entire community shocked, rattled and ready to get political. But outspoken surviving students are being accused of being attention seekers, shills for liberal media outlets and actors hired to stir up trouble.

An aide to state Rep. Shawn Harrison (R-Tampa) fueled rumors and conspiracy theories with an email to a Tampa Bay Times reporter claiming the students being interviewed on television were actually “actors that travel to various crisis [sic] when they happen.”

The aide was fired in relatively short order. Harrison publicly apologized. But the damage was done, and the internet was on fire. The high school’s junior class president, Jaclyn Corin, replied forcefully on Twitter.

“We are KIDS — not actors,” she wrote. “We are KIDS who feared for our lives while someone shot up our school.”

Students keep giving interviews, defending themselves on top of speaking out about the need to change gun laws and organizing a march on Washington for March 24.

“It just got harder for everyone…”

While that controversy was just getting revved up, Lenamon was already in Washington, D.C., on a long-planned trip for a hockey tournament, his mother and grandmother in tow. He and the three other Stoneman students on the Junior Panthers travel team talked it over together and decided they wanted to play. By Friday morning, after getting very little sleep, attending the vigil at his school and watching the suspected shooter appear in court for the first time, he was in D.C. It was a chance to do something normal and calm, he says.

“And I decided to come because the rest of the team wanted to come,” he said. “It’s good to get away and just be normal, go do the thing we had been planning on doing.”

The hockey team had an ambitious proposal to score 17 goals over the long Presidents Day weekend tournament, one for each victim — quite a feat for the usually low-scoring sport of hockey, even over three days of play. Instead, the coach produced a roll of burgundy tape for the 17 players on the traveling team, allowing each of them to carry the Stoneman school colors and a name of one of the fallen onto the ice with them.

The only tourist experience on Lenamon’s weekend agenda was to go to the White House — not to protest or shout, but to watch Secret Service teams do their jobs for as long as the frigid February temperatures would allow and maybe, hopefully, see Marine One take off from the South Lawn.

With prominent death penalty defense attorney Terry Lenamon for a father and long-time, no-nonsense Broward County prosecutor Gloria Moschella for mother (plus an extended family of journalists), Jude Lenamon is not unaware of the unjust and harsh sides of life.

Hearing a firsthand account of the shooting, especially coming from a calm and level-headed teenager, it is striking how painfully unfair and overwhelming this brand of violence truly is.

“Yeah, life’s supposed to be at least a little easy, I guess,” he says. “Now, it just got harder for everyone … You can’t really be carefree anymore, because you experienced something like this.”

Helicopters and sirens already sound different to him, Lenamon says, though he hasn’t changed his mind about wanting a career in the military or law enforcement.

“I know this could happen anywhere,” he says. “We know it happens, but we don’t think it could happen to us. Literally, that’s what I was saying to my friends as we were evacuating on Wednesday.”

“I’m done with the talk. There’s got to be some action.”

When someone so young says things like “Everyone feels changed,” even just days after the incident, the community-wide ripple effect becomes clear. It touches everyone, not just the students in the building at the time.

Parkland is often described as picturesque, like the set of a movie or TV show. It is the kind of place where trick-or-treaters accept homemade Halloween treats without thinking twice. It ranked as the 15th safest city in America, based on crime statistics and population, in a report released days before the shooting.

The city of about 28,000 in northwestern Broward County, about 30 miles from Fort Lauderdale, boasts a median household income of $128,292 and has only 2.8 percent of its residents living in poverty, according to the U.S. Census Bureau.

Parkland’s relative privilege is what has Lenamon’s mother convinced that this school shooting is the tipping point for real change.

“Parkland. It’s a community that is educated, affluent. If we don’t get it done there, you’re going to continue to see this everywhere,” Moschella says. “Every single time you hear it on the news … ‘This was the worst massacre in history’ and blah blah blah, and every single time I have yelled back at the TV, ‘Until the next time!’ And there’s always a next time. Because nobody wants to address gun control.”

There has to be a compromise, she says, something that protects children, families and communities while still respecting the Constitution and remaining realistic about the sheer number of guns already out there in the U.S.

“We’re not just going to have this talk crap anymore, all this talk of ‘We need gun control,’ and then literally in a month, everybody will forget this happened and move on with their lives,” she says. “But the people this happens to don’t have that luxury.”

Every Christmas, Moschella prays for the families of Sandy Hook, the December 2013 school shooting that took the lives of 20 children between 6 and 7 years old, as well as six adult staff members.

“Even when I’ve been kneeling there, thinking about those parents who are struggling with that kind of tragedy, every Christmas, I never thought I’d be sitting here, having this conversation about my son and his classmates,” she says. “So I’m done with the talk. There’s got to be some action. There just has to be.”

Many Stoneman students, refusing to be seen solely as victims, are already taking action. For some, including Lenamon, that means not just granting interviews or making plans to attend a march in a month, but moving forward — hockey tournaments, hugging friends, talking through things and just living, even while acknowledging the shadow of the shooting.

“I think if you live your life in fear, you won’t be able to get through it,” Lenamon says. “You can think about this happening at our school, but it could happen at any school, anywhere. Even if they have a guard at a gate, it could happen anywhere.” 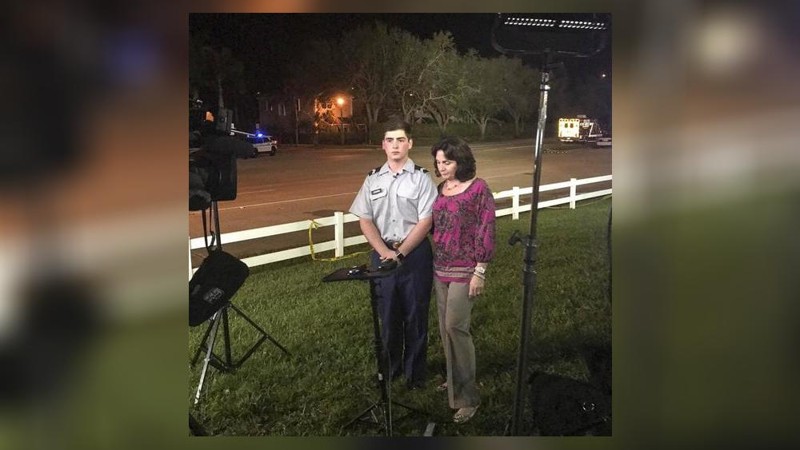