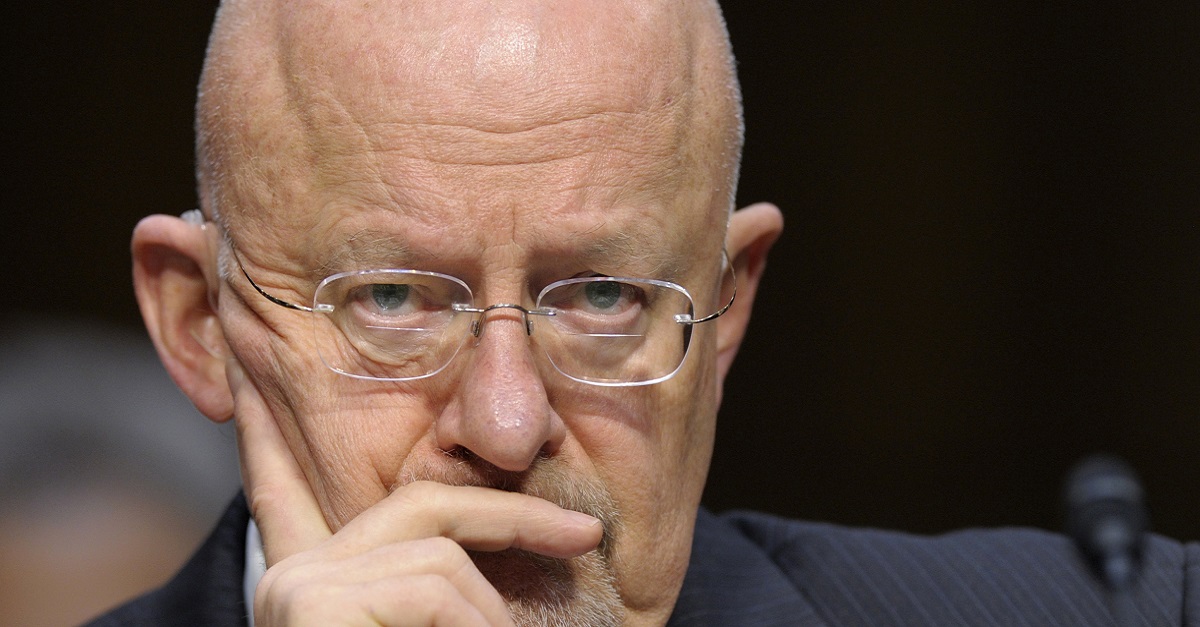 AP Photo/Susan Walsh, File
FILE  In this March 12, 2013, file photo Director of National Intelligence (DNI), James Clapper, listens to testimony at the Senate Intelligence Committee hearing on Capitol Hill in Washington, where he testified about worldwide threats. Clapper has spent more than two-thirds of his 72 years collecting, analyzing and reviewing spy data from war zones and rogue nations. He says disputes within the intelligence community are uncommon, but absolutely necessary to get as much input as possible in far-flung places where it's hard for the U.S. to extract, or fully understand, ground-level realities. ...People lust for uniform clairvoyance. We're not going to do that, Clapper told The Associated Press Friday, May 24, 2013. (AP Photo/Susan Walsh, File)

Several members of Congress are calling for the prosecution of former Director of National Intelligence James Clapper for inaccurate testimony he gave in 2013 about the U.S. government’s domestic surveillance practices.

In a 2013 Senate Intelligence Committee hearing, Clapper testified that the NSA was “not wittingly” collecting “any type of data at all” on millions of Americans. Former NSA contractor Edward Snowden later revealed classified information showing that court orders forced phone companies to turn over U.S. phone records on an “ongoing, daily basis.” Clapper would later admit he “misspoke.”

“The time for the Department of Justice and the FBI to bring the accusations against James Clapper in front of a grand jury is long overdue,” Rep. Ted Poe (R-Texas) said. “He and others who have held administrative power must be held accountable to the same laws that govern the people of the United States.”

Some of these lawmakers had called for Clapper’s prosecution during the Obama administration, but are not renewing their calls for prosecution before the statute of limitations runs out.

“Yes, he should be prosecuted,” Rep. Thomas Massie (R-Ky.) told the Washington Examiner. “He admitted to lying to Congress and was unremorseful and flippant about it. The integrity of our federal government is at stake because his behavior sets the standard for the entire intelligence community. The same goes for James Comey, who secretly leaked documents that he was not legally permitted to release,” read Massie’s tweet that the Washington Examiner quoted and was retweeted by both Sen. Rand Paul (R-Ky.) and Rep. Justin Amash (R-Mich.).

"He admitted to lying to Congress and was unremorseful and flippant about it. The integrity of our federal government is at stake because his behavior sets the standard for the entire intelligence community.” https://t.co/I34SwIrvVz

Rep. Louie Gohmert, (R-Texas), was even harsher, arguing that Clapper “should be prosecuted for any and all lies he told to Congress.”

In an letter published later in 2013, Clapper wrote that he gave a “clearly erroneous” answer because he “simply didn’t think of” the call-record collection and apologized. However, in an MSNBC interview he offered a different explanation, saying he gave the “least untruthful” answer because he was “asked a, ‘When are you going to stop beating your wife?’ kind of question, meaning not answerable necessarily by a simple yes or no.”

Sen. Ron Wyden (D-Oreg.), to whom Clapper gave the inaccurate answer, has long argued that the latter’s answer was no innocent mistake. Wyden said the question was provided beforehand, and that he later asked Clapper to correct the record afterward, although he did not do so.

Wyden recently said in a interview that “Clapper’s lie about mass surveillance was so damaging to public trust in government” and that “Clapper said he made an error, but that’s not how I see it. He didn’t just lie to me, he lied to the American people.”

“When politicians argue in bad faith about what laws do, it makes it easier for skeptics to dismiss everyone in Congress, in politics, as a liar,” Wyden added. “It makes it possible, even probable, for hucksters and authoritarians to take power.”