Actor Matt Damon gave a graduation speech at MIT last week and definitely brought his politics into the mix.

The actor, who is well known for his liberal activism, had a dire warning in his speech: “There is more at stake today than in every story that has ever been told.”

Whiling talking about the value of education and the importance to continue learning throughout life, he took the opportunity to take a swipe against presidential Republican frontrunner Donald Trump.

RELATED: Watching Ben Affleck and Matt Damon freak out at their first Oscars is as funny now as it was in 1998

“You’re working on some crazy stuff in these buildings,” Damon say, before talking about simulation theory.

“What if this, all of this, is a simulation? I mean, it’s a crazy idea, but what if it is. And if there are multiple simulations, how come we have to be in the one where Donald Trump becomes the Republican nominee for president?”

He adds: “Can we like transfer to a different one?”

His message? “What we do matters.”

He additionally took a pass at the controversial Trump University.

“Your education should never be over, even outside of your work,” he said, before listing off different opportunities to learn like TedTalks.  “I’m told there’s even a Trump University. I have no earthly idea what they teach there.”

The actor, who grew up in Cambridge, Mass., additionally fired shots at bankers, and gave Sen. Elizabeth Warren glowing praise.

He continued: “I don’t know if justice is coming for you in this life or the next. But if it does come in this life, her name will be Elizabeth Warren.”

Damon, who was 12 credits share of officially graduating from his alma mater Harvard University, made a joke about being on the MIT campus for the speech.

“You can imagine how excited I was when President Reif wanted me to speak at the MIT commencement, and how sorry I was to learn that the MIT commencement speaker does not get to go home with a degree,” he said. “So, yes, for the second time in my life, I’m fake graduating from a college in my hometown.” 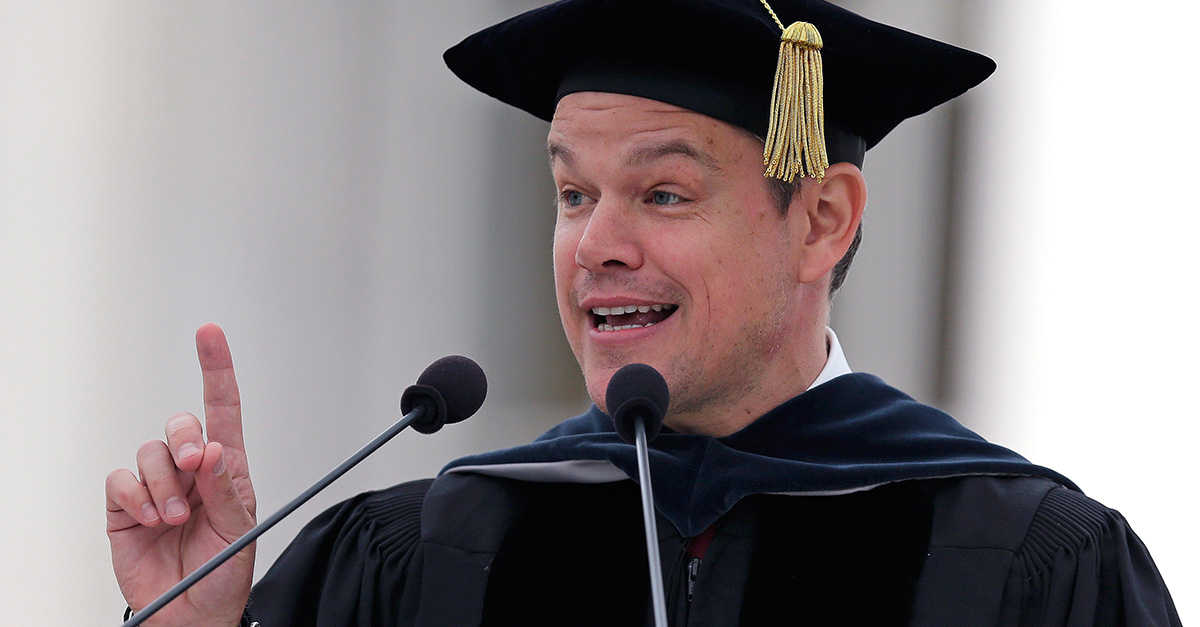