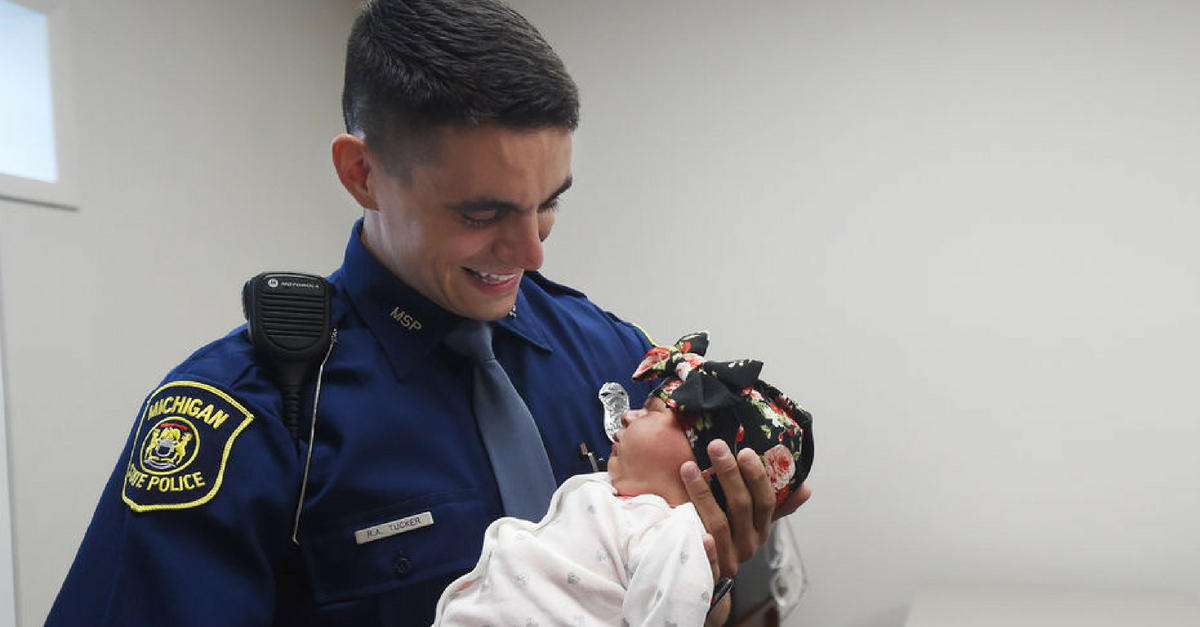 It’s feel good Friday, and boy are we feeling it after this story!

It all started one Sunday Morning in Michigan when Jessica Paielli’s water broke on her way to Henry Ford Allegiance Health Hospital, where she was scheduled to give birth to her fourth child. But Jessica’s water broke just two minutes before she and her husband, Andrew Paielli, reached the edge of Cooper Street Correctional Facility.

The couple started to panic when they could see the newborn’s legs, meaning, well…they weren’t going anywhere anytime soon. Minutes later, Hannah was born inside the couples SUV, but the couple automatically knew something was wrong when the newborn’s skin was blue and purple and she was unresponsive.

Like any concerned parent would, the father, Andre Paielli, called 911 for help. A few minutes later State Trooper Ronnie Tucker arrived. He’d been around the area working on a report for a domestic violence arrest he made earlier in his overnight shift. Tucker had CPR equipment in his vehicle, for which he learned during a training he underwent in the police academy. According to Tucker, baby Hannah did have a pulse, but wasn’t breathing, which is why he performed the life-saving techniques to keep the newborn’s airway open. As soon as Tucker heard the newborn breath, he saw she began to gain color.

In an interview with KGKW8, he recalls the moment, stating, “I made sure she had an open airway. I started rubbing her chest to get some stimulation going. When she let out her first cry I almost fainted.” (I’m pretty sure we’d all faint if we were in that situation, Tuck.) The couple immediately drove to the hospital after Hannah was stable, and were discharged a few days after. To make things even better, the couple and the Sheriff had an interaction where Tucker was able to meet Hanna for the second time! Take a look at the sweet encounter below. That’s the cutest little munchkin I’ve seen!