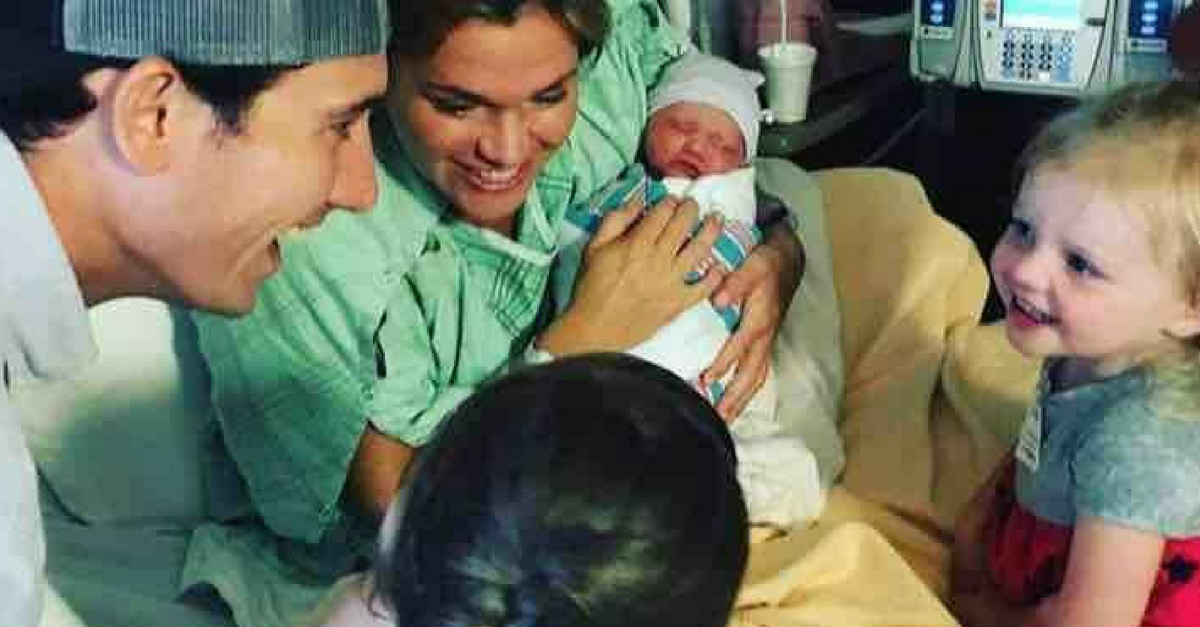 Grab the tissues, because this will bring back your faith in humanity. Despite situations that we can’t control, at times we have to stop and realize that sometimes life can truly be a miracle, even if we don’t see it at that time.

On July 2, 2018, eight days after she gave birth to her son Nolan, Lindsay Crosby was transported to Hartford Hospital in Connecticut, where doctors diagnosed her with Strep A. Strep A is a bacteria often found on the skin, most commonly in the throat. According to the Centers for Disease Control, it can cause a range of minor and serious impact, including scarlet and/or rheumatic fever, and strep throat fever.

By the time the mother of three was taken to the hospital, the bacteria had caused her to experience sepsis, the immune system’s deadly response to an infection, which caused difficulty in breathing, change in mental status, and low or no urine output. When sepsis worsens, it can usually lead to septic shock, making one’s blood pressure to lower, resulting in organ failure or death.

Unfortunately, two days after being hospitalized, Crosby died from complications from an infection. Crosby was surrounded by her husband, Evan Crosby, her daughters Finley, 5, Sigrid, 3, and her newborn son, Nolan.

In the past months, there has been an outpouring of support for the family in Simsbury, mourning the tragic death of the mother. Two separate donations pages have been set up by the Crosby family, and both raised a combined $375,000 in just 12 days. The funds come from thousands of friends, relatives, and strangers who struggle to understand how a young mother succumbed to sepsis, less than two weeks after giving birth. Fast forward to 8 months from then, the family has raised nearly $70,000!

Simsbury: Thousands are showing love to a family going thru an incredibly sad loss. Lindsay Crosby died July 4, a week after she gave birth to her third child. Her family graciously shared a message for the community with @WFSBnews I’ll have a live report in 25 minutes! pic.twitter.com/NwfvsH4UUx

Crosby lived and worked at Westminster School for three years as an Associate Director of Admission, and was an active faculty member. She was also the head coach of the girl’s lacrosse team and a student and dorm advisor.

It’s no surprise why the community took it upon themselves to help the family in this time of need. The family told 14 News they were grateful for the donations from individuals who have helped them pay for the unexpected expenses following Lindsay’s death. The GoFundMe is full of messages from around the world, giving the family their condolences, despite not knowing the family. It’s times like these when you have to take a step back from the negativity and appreciate the good.

Through a statement, the family addressed the public thanking them for their generosity stating,

“Thank you for the love you have shown to Evan and the children. We are overwhelmed by your generosity. Your heart for this hurting family honors Lindsay’s memory. We cannot even begin to imagine the needs that will arise in the weeks, months and year to come. So many people have been touched by Lindsay, Evan and the Crosby/Bugbee families. Your compassion has led us to raise our goal.”

For those of you who still have questions about sepsis, let’s break it down for you.

What Is Sepsis, and How to Spot It

According to the Sepsis Alliance, sepsis is the body’s life-threatening and overwhelming response to infection, leading to tissue damage, organ failure, and death. In other words, it is your body’s overactive and toxic response to an infection. Usually, your immune system can fight off any germs, such as viruses, bacteria or fungi, to prevent infection. If an infection does occur, your immune system will try to fight it, but might still need help with medication such as antibiotics. However, for reasons that researches have yet to understand, such in with Lindsey’s case, sometimes if you have a weakened immune system, it can decide to stop fighting and begin to turn on itself. This is the beginning of Sepsis.

Usually, people with chronic illness and those with weakened or impaired immune systems are at higher risk of developing sepsis. When it progresses to severe sepsis, as stated before, it can usually lead to signs of organ dysfunction, difficulty breathing, abnormal liver test, and changes in mental status. Nearly all patients with severe sepsis are required to partake in treatment in an Intensive Care Unit.

For women who are pregnant, septic can occur due to complications such as cesarean section, miscarriage, prolonged or obscured labor, and ruptured membranes.

What does this mean? Well, unfortunately, Sepsis can be caused by any type of infection: viral, fungal, urinary tract infection, bacteria or even parasitic. Many infections can be prevented simply by constant hygiene, such as hand washing. One should also be aware of any open wounds that might get infected in the future, to prevent any bacteria from entering the body. Yet, health care professionals say one of the best ways to prevent it is through the use of vaccines.

The most common symptoms and risk factors of sepsis include:

If you suspect you might have Sepsis, make you sure visit your local emergency room as soon as possible to avoid any incidents and get early treatment. Doctors will be able to conduct any blood tests you need to avoid the infection from spreading.

If you would like to donate to the Crosby family, you can do so by clicking here.