This Map Shows The Most Profitable Industry In All 50 U.S States 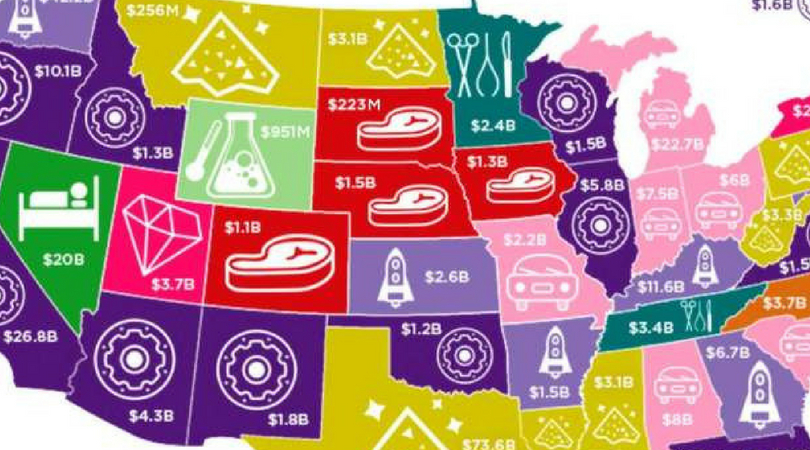 The experts have spoken! More than half of the states in the United States are driven by three leading industries: Aerospace, Mineral Resources, and Machinery. Yup, HowMuch, a cost information website, created a map painting a picture of the technologies and products that fuel the country’s economic growth, calling the finding very ?unnerving.? As you can tell, the U.S. economy is diverse in several regions, but not very diverse in others. 27 states are led by three aforementioned industries, meaning certain segments are under technological disruption or are in economic downturns.

HowMuch created the map from findings GoBankingRates conducted in 2017 by pulling data from the U.S. Census Bureau. The company went all out by color coding the map based on the lucrative sector and added a nice logo to it to give it a little bit of spunk. The top five most profitable industries in America? Mineral products, aerospace, machinery and mechanical appliances, automotive, and precious metals, stones, and jewelry. Of course, some of the findings are pretty predictable, like the fact the states in the Motor City region surrounding Detroit (Ohio, Michigan, and India) get their biggest economic boost from car manufacturers. As well as for Maine and Alaska who benefit from a substantial finishing industry.

Others such as Kansas? 2.6 billion aerospace industry is a bit more unexpected, but still pretty impressive. The same with Florida, Idaho, and Illinois, which don’t? seem to have anything in common, but now do. Now, keep in mind that the most profitable industry doesn’t mean the biggest industry. If they were equivalent, then, of course, the majority of states would be either retail or healthcare and that study would be quite boring if you ask me.

There is an overlap between the most lucrative industry and the biggest export in each state. I was pretty surprised to see that the most portrait industry in Nevada, at $20 billion, is accommodation and food survey (Viva Las Vegas, am I right?), while it?s largest export is gold, at $6.3 million. As for Texas, it?s no shock there has to be something involved with oil. The oil abundance of the good ol? southern state makes mineral produces the most profitable industry in the study overall. While South Dakota?s meat industry accounted for the lowest value among all states at $223 million. What a day to be alive.