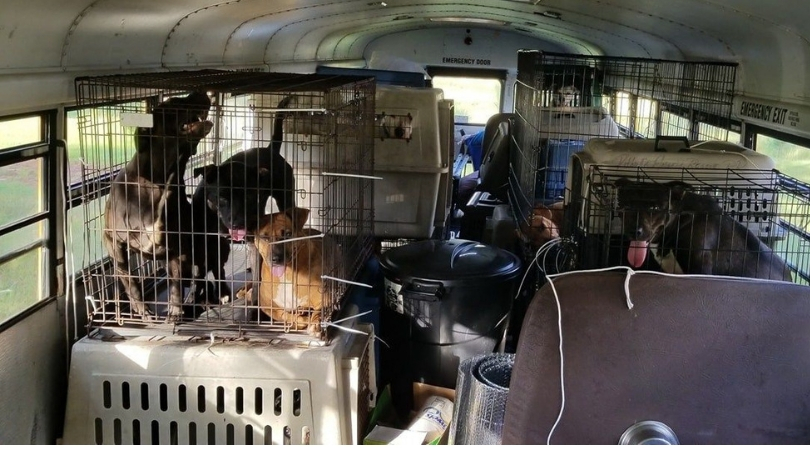 51-year-old Tony Alsup is truly a hero sent from above after he decided to help save dogs and cats around the areas affected by Hurricane Florence. Alsup, from Greenback, Tennessee, heard about shelters closing and evacuations occurring, which is why he decided to help out by transporting the animals to nearby shelters that had room for more pets throughout the Carolina coast.

How exactly are the pets transported? Inside a yellow school bus! Yes, to make things easier for both Alsup and the animals, the seats have been ripped out to make room for its furry passengers and has the words “Emergency Animal Rescue Shelter” on the outside to distinguish is from other school buses. After hearing about his heroic deed, people are comparing the school bus to Noah’s Ark, which has rescued 53 dogs and 11 cats.

Alsup, who has always wanted to open an animal shelter, has been rescuing pets since Hurricane Harvey. He explained how he saw a plea online for anyone who could help evacuate shelter pets out of the storm and volunteered to transfer the pets in his semi-truck. Wanting to transport more at a time, Alsup decided to spend a total of $3,200 to buy an old school bus, driving to Texas and filling it with pets in 2017.  Ever since, he has been driving into hurricane zones and helped the animals any way he can.

This time around, when he saw on the news how animal shelters had become overcrowded with rescued or lost animals, he wanted to help transport them to vacant shelters. He filled the bus with kennels stacked from the floor to the ceiling, pet food, leashes, water bowls, and toys.

Alsup spoke with Washington Post about his decision, stating,

I?m like, look, these are lives too. Animals ? especially shelter pets ? they always have to take the back seat of the bus. But I?ll give them their own bus. If I have to I?ll pay for all the fuel, or even a boat, to get these dogs out of there.?

In less than 48 hours he stopped at the Dillon County Animal Shelter, Humane Society of North Myrtle Beach, and Orangeburg. Alsup also took to Facebook to ask his followers and friends to point him to where pets needed help. Saint Frances Animal Center pled for help after the shelter was overcrowded, which is when Alsup rescued all the ?leftover? pets. He took the pets to Foley, Alabama, where he found a privately run dog shelter, where the animals were given baths and a place to sleep. Some were able to adopt the animals on the spot, and the rest, Alsup coordinated with other animal shelters to meet him in Knoxville Tennessee where he would hand off more than 40 animals.

Florence was degraded to a tropical storm after it?s landfall on Friday, but strong wind, torrential rain, and flood water have devastated communities, killing at least 17 people. Alsup’s story isn’t the first post going viral that shows animals left behind, and heroes attempting to rescue them.

In the town of Leland, outside of Wilmington, two volunteers, David Rebollar, and Ryan Nichols came across a group of dogs that were abandoned in locked gates, as flood water rose around them. In the video, you can see and hear the dogs crying for help, scared as the men get close to them. Reporter Marcus DiPaola shared the video on Twitter, writing how the owner had left the 6 dogs, and the water was rapidly rising, which is why they decided to help them to avoid them drowning. Nichols stated a neighbor told him the family who left the dogs behind includes an 8-month-old and left in panic between Saturday night and Sunday morning. The video has had more than 2.3 million views.

Rescued six dogs in Leland, NC, after the owner LEFT THEM locked in an outdoor cage that filled with flood water that was rapidly rising.

We got them out, but by the time we left, the water was so high that they would have drowned. BRING YOUR PETS WITH YOU! #HurricaneFlorence pic.twitter.com/tRibGxCjXy

The US National Weather Service warned the flooding will get worse in several areas in South Carolina, North Carolina, and Virginia. Experts are alerting people in the surrounding areas to follow evacuation orders and take their pets with them.