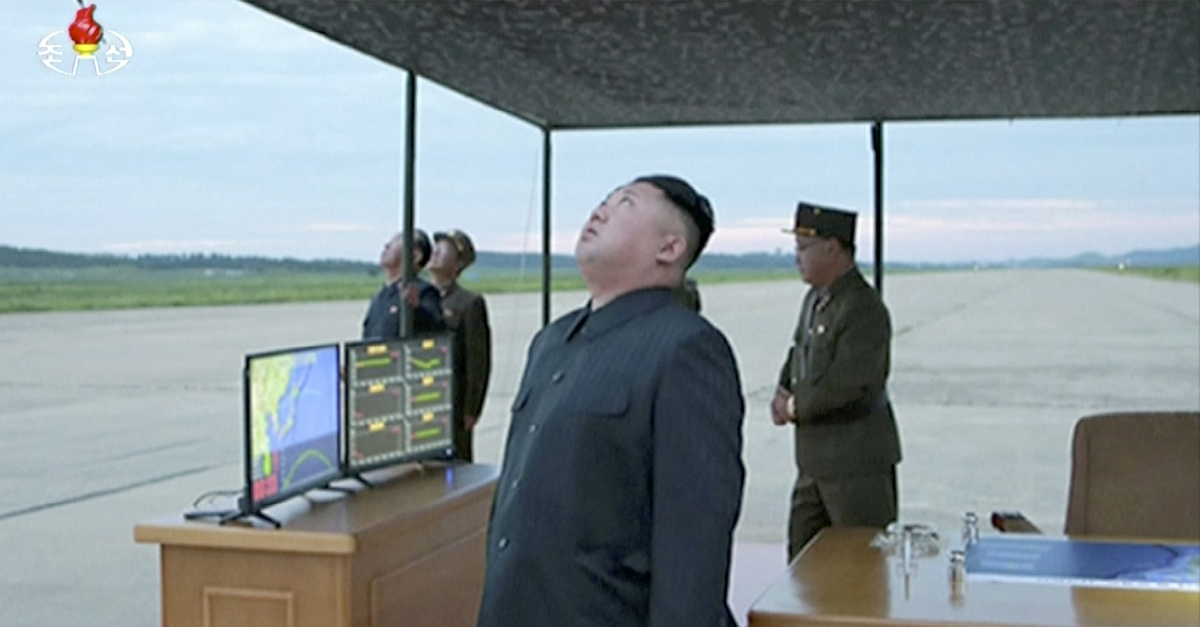 (KRT via AP Video)
In this image made from video of a news bulletin aired by North Korean government broadcaster KRT on Wednesday, Aug. 30, 2017, leader Kim Jong Un looks up at the sky at what is said to have been a missile launch on Aug. 29, 2017, at an undisclosed location in North Korea. The language from North Korea on Wednesday is as familiar as it is chilling, a declaration to the world to expect more missile tests. But there are important clues about North Korea's ambitious push to send its missiles farther into the Pacific Ocean in an attempt to make them an accepted part of life in the region, as leader Kim Jong Un expands the weapons program he sees as his country's best chance of survival against encircling enemies. Independent journalists were not given access to cover the event depicted in this photo. (KRT via AP Video)

Hawaiians were sent into a panic on Saturday when they received a push notification on their phones reading, “BALLISTIC MISSILE THREAT INBOUND TO HAWAII. SEEK IMMEDIATE SHELTER. THIS IS NOT A DRILL.”

It turns out that the residents and visitors of America’s most-distant state actually didn’t have anything to worry about — at least not in terms of an inbound ballistic missile. But, that didn’t stop a wide-scale panic from briefly overtaking the island.

Quickly, Sen. Tulsi Gabbard, D-HI, tweeted a message, telling her constituents “this is a false alarm.”

Hawaii is located off the coast of California, between the United States and North Korea. Officials in the island state said last November that they were activating air raid sirens that were used during World War II.

In Guam, residents were put on edge last year when rhetoric escalated between the U.S. and North Korea. But, the U.S has a number of defenses aimed at stopping an attack from Pyongyang. The Terminal High Altitude Area Defense system in South Korea is capable of tracking any North Korean missiles. In addition, there are a number of ships in the Pacific, both American and Japanese, equipped with SM-3 missiles that could bring down a North Korean nuke, The New York Times reports.

But, for Hawaiians, those precautions didn’t make Saturday morning any more pleasant during the minutes between the time that they got the “missile inbound” alert on their phones and the announcement by officials that the alert was a mistake.