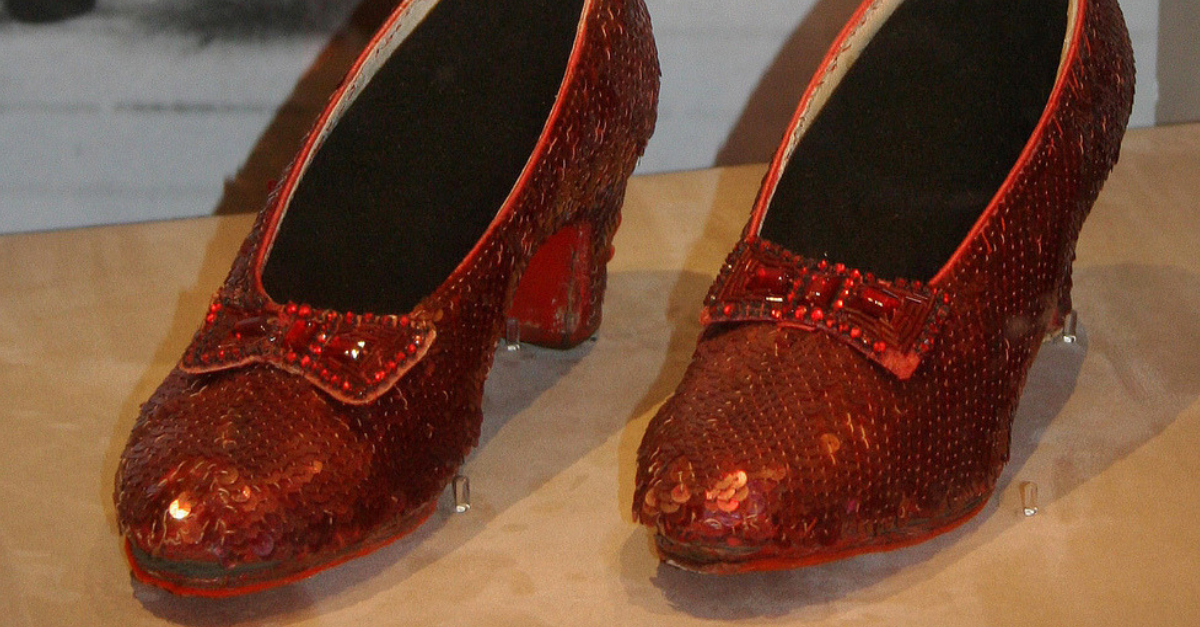 The Unabomber, Al Capone, and, now, whoever stole Dorothy’s ruby red slippers from The Wizard of Oz. Another monster taken down by the FBI. And it only took thirteen years! That feels like the right amount of time to recover stolen shoes, based on the resources and man-hours a pair of stolen shoes deserves from the FBI.

The ruby slippers from the iconic 1939 film starring Judy Garland were stolen in 2005 from the Judy Garland Museum in Grand Rapids, Minnesota. They’re one of several pairs of the iconic shoes that were custom made for the legendary actress. Other pairs of Dorothy’s slippers are owned by private collectors while one pair was purchased by actor Leonardo DiCaprio and director Steven Spielberg and donated to the Academy Museum of Motion Pictures. The pair of slippers that were stolen were insured for $1 million.

Anyway, thank God our long national nightmare is finally over. The slippers are safe after what I assume was an arrest that did not at all play out like the shootout at the end of The Untouchables (if only), though had an outside chance of playing out like the ending of Silence of the Lambs.

It’s unclear what the end game here was for the slippers’ thief. You can’t just move a pair of Dorothy’s ruby red slippers. It’s hard to imagine anything more noticeable that isn’t also giant. And who buys these? The list of people willing and able to illegally purchase Dorothy’s million dollar red slippers has got to be half a page long at best. The Hollywood Memorabilia black market has got to be filled with just aggressively weird people. Rob a bank or something if you’re that good at being a thief. This was poorly thought out.

How the Minneapolis branch of the FBI recovered the slippers still has not been disclosed yet. Officials with the Minneapolis FBI, the North Dakota U.S. Attorney’s Office and the Grand Rapids Police Department are have said they will announce more information during a press conference about the slipper recovery on Tuesday afternoon.

I, for one, am fascinated to find out how our federal government hunted down a shoe thief.