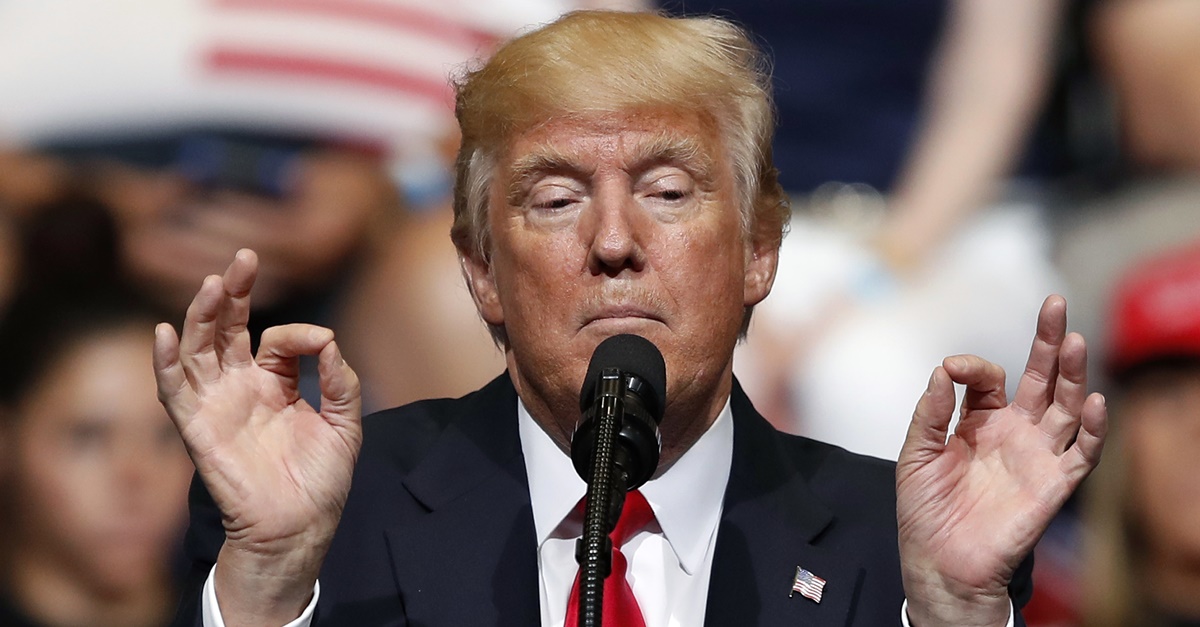 On Wednesday morning, President Trump tweeted his intention to ban transgender individuals from serving in the military. The president referred to “tremendous medical costs” and “disruption that transgender [people] in the military would entail” as the reasoning behind his decision. He also stated that the decision was made after he consulted with his “Generals and military experts.”

The president’s larger decisions, such as his travel ban, have not come without pushback from members of the public. Now, his opponents are questioning whether the move to ban a certain group of Americans from joining the service is legal.

RELATED: Trump tweeted his intent to ban transgender people from the military, and a campaign season tweet is back in the public eye

As of Wednesday afternoon, the old service ban still seems to be overruled by the transgender policy that reversed it, enacted under the supervision of former Defense Secretary Ashton Carter in 2016. That directive still appears on the Department of Defense’s (DOD) website: “Effective immediately, transgender Service members may serve openly, and they can no longer be discharged or otherwise separated from the military solely for being transgender individuals.”

The DOD has yet to comment on Trump’s proposed reversal of policy, which currently covers transitioning and transitioned individuals who wish to serve, as well as those who seek to transition during their service.

CNN also noted that the military’s aggregated medical costs for transgender services are not a significant cost.

Here’s the cost to provide transgender-related services to active US military members, according to a study https://t.co/TGX0brnuM1 pic.twitter.com/lcDuvbDeEX

At the time the old service ban was overturned, the RAND Corporation released a study exploring the impact that transgender service members might have on the military. The report anticipated “little or no impact on unit cohesion,” also noting that commanders expected “benefits for all service members by creating a more inclusive and diverse force.”

But while pundits argue in support of or opposition to Trump’s announcement on the bases of diversity, military readiness and/or financial burdens, few have touched on its legality.

Early in June, White House Press Secretary Sean Spicer confirmed that the president’s tweets are official statements, meaning that the Wednesday morning tweets should be taken with the same seriousness of a White House press release.

The American Civil Liberties Union (ACLU) has done exactly that, announcing its intention to fight the ban.

There is no basis for turning trans people away from our military. We are examining all of our options on how to fight this.

As for the reasoning and timing for the ban, Axios reported that an unnamed administration official said the following:

This forces Democrats in Rust Belt states like Ohio, Michigan and Wisconsin to take complete ownership of this issue. How will the blue collar voters in these states respond when senators up for re-election in 2018 like Debbie Stabenow are forced to make their opposition to this a key plank of their campaigns?

The chosen quote made no mention of Trump’s own “tremendous medical costs” and “disruption” statements, nor did it give any insight into the administration’s legal argument.

RELATED: The Texas ?Bathroom Bill? just won?t die, and it could affect the 2018 Republican primary

Prior to the president’s tweet, the United States joined 18 other countries in allowing transgender individuals to serve in the military. Those countries include allies such as Australia, Israel, Britain, Sweden and Canada.

Around the time the old ban was overturned, the DOD also updated its military equal opportunity program to include protections against discrimination for a service member’s sexual orientation. The repeal of ‘Don’t Ask, Don’t Tell’ and the extension of the Family and Medical Leave Act to LGBT couples also occurred during President Obama’s administration.

It is also notable that Republicans in the United States House of Representatives are currently exploring ways to pull the Pentagon’s funding for gender reassignment surgeries.