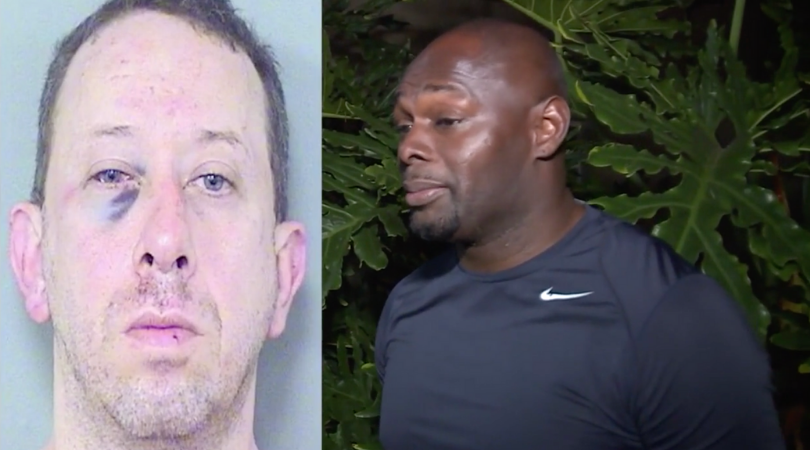 This particular window was at the home of ex-NFL player Tony Beckham in Wellington, Florida. It was his daughter’s window. Beckham, a Division III college player from Wisconsin-Stout, was drafted in the fourth round by the Tennessee Titans and played defensive back for the Titans and Detroit Lions from 2002 to 2007. Not being super thrilled about a 48-year-old peeping Tom standing outside his daughter’s window and yanking on himself in the bushes, the former NFL cornerback ran outside and chased down Geoffrey Cassidy, who had absolutely zero chance of getting away.

Beckham played at arguably the fastest position on the football field at the highest level possible. Even though Beckham is 40-years-old now, there’s no way he’s not still way faster (and way stronger) than the average human being, let alone some schlub who jerks off behind a palm tree. So it didn’t take long for Beckham to catch Cassidy. According to a Palm Beach County Sheriff’s Office probable cause affidavit, Beckham saw Cassidy crouched in the bushes by the window with his hands in his pants. He went outside and yelled at Cassidy who started to run away but, of course, an actual getaway was never a possibility for Cassidy. Not with a furious, paternal, professional athlete on his trail.

As soon as Beckham caught up to the peeping Tom the former NFL player tackled him with what was undoubtedly perfect and painful form.

From there Beckham’s wife came outside and saw Beckham holding down Cassidy and called 911.

Beckham told WPBF news station that after he caught Cassidy the two had a “good conversation” — presumably a euphemism for, “I destroyed his face” since, after Cassidy’s arrest, he was taken to Wellington Regional Medical Center to be treated for fractures to his face and eye.

Sometimes, the universe is just.

This story was originally published January 21, 2019.

Watch: The 8 Highest Paid Backup Quarterbacks in the NFL