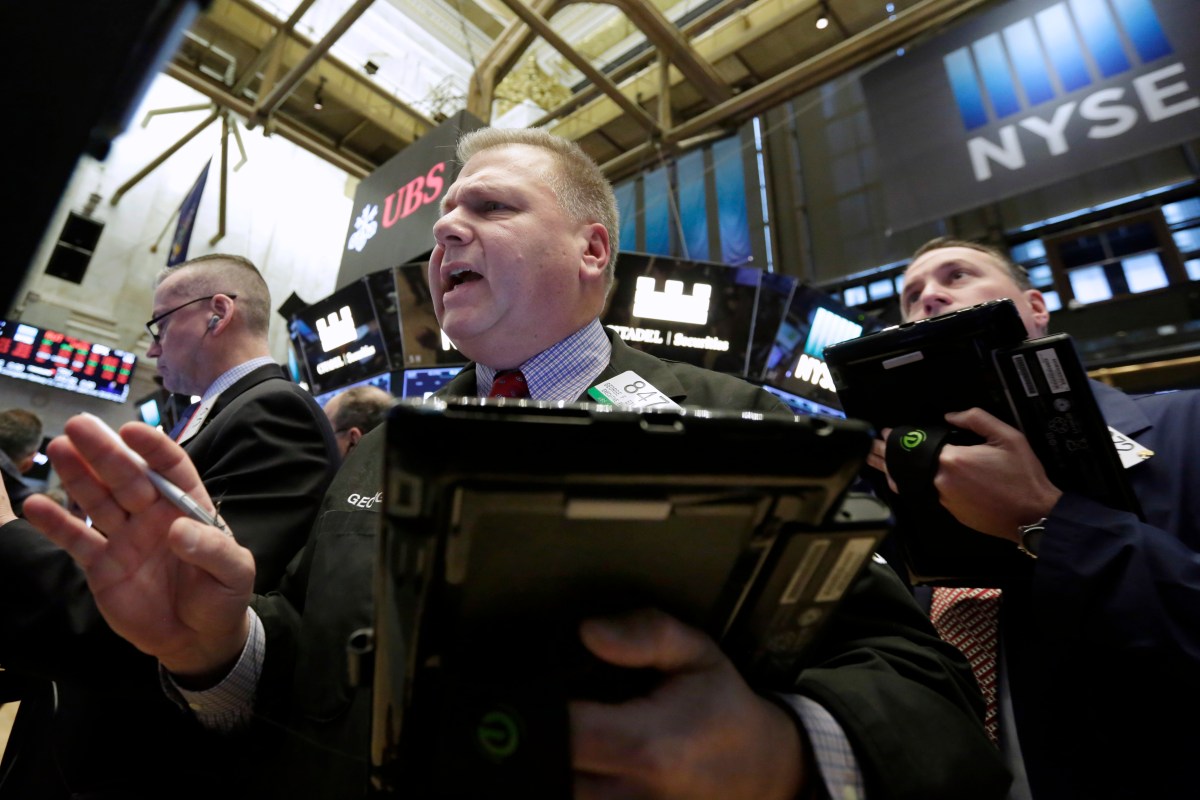 AP Photo/Richard Drew
Trader George Ettinger, center, works on the floor of the New York Stock Exchange, Tuesday, Feb. 6, 2018. The Dow Jones industrial average fell as much as 500 points in early trading, bringing the index down 10 percent from the record high it reached on Jan. 26. The DJIA quickly recovered much of that loss. (AP Photo/Richard Drew)

Unemployment is down. GDP is growing. Wages are going up.

These are all good things, for the economy and for working Americans.

But they also mean that the cost of labor is rising, which can be a drag for profits and big corporations in general.

Tate Lacey, policy analyst at the Cato Institute’s Center for Monetary and Financial Alternatives, said the expected rate hikes coming from the Fed later this year will create “some upward pressure” — making things a little more expensive for those seeking their first mortgage, looking to refinance an existing one or get a new car loan — but will keep the actual economy from seeming as volatile as the stock market for the long term.

Americans want a central bank that takes a longer-term focus and takes things like keeping inflation under control more seriously than reacting to day-to-day or even intra-day fluctuations.

“Inflation not properly curbed can be a pernicious economic force,” he said.

When it comes to corporations like the ones with stocks traded on the Dow Jones industrial average, those rising interest rates and wages both cost them more money, to both borrow and pay their employees.

It’s a little scary when the stock market gets volatile, but it’s also part of the painful process of coming back down to something close to normal after some possible artificial highs.

“If you look at it on percentage terms, it’s nowhere near one of the worst days ever,” Lacey said.

Stocks plunged at Tuesday’s opening bell and yo-yo’ed their way through the rest of the day in some of the largest swings ever, according to the Wall Street Journal. Steep drops Friday and Monday erased the gains made since the beginning of the year by the, Dow Jones industrial average, an index made up of 30 big-name U.S. companies, and the broader Standard & Poor’s 500.

But both remain higher than they have been over the past 12 months, with the Dow still up 20 percent and the S&P 500 up 15 percent from a year ago and the volatility by no means indicates the broader economy is in trouble. While S&P 500 is down 8.4 percent from its record high on January 26, that’s still less than the 10 percent Wall Street considers a “correction.”

A White House spokesman said Tuesday morning that President Donald Trump is not focused on this week’s stock market volatility, in spite of repeatedly touting Wall Street’s climb since his election.

.@hogangidley45: "No question the president was involved and responsible for the increase in the stock market, but also the overall economy." pic.twitter.com/TWOEMum628

“Obviously the president did tout the stock market, but I would hardly say that he focused on it,” White House deputy press secretary Hogan Gidley said during Fox Business network appearance, contending that the Trump Administration’s mission to cut regulations is helping businesses create more jobs and grow.

“The fundamentals of this American economy are strong and the American people quite frankly are seeing the effect,” Gidley said.