Jimmy Kimmel: "I want to say thank you to President Trump … last year it seemed like the #Oscars were racist." pic.twitter.com/YeLsScJZv0

Jimmy Kimmel kicked off the Academy Awards by making a few jokes at Donald Trump’s expense.

When it came to preparing for the show, Kimmel was told he needed to unite the Academy, and he just had one thing to say about that: “Let’s just get something straight: I’m not here to do that.”

Instead, Kimmel encouraged the crowd and viewers at home to reach out and do something else.

“If every one of you took a moment to reach out to one person you disagree with, someone you like, and have a positive conversation again, not as liberals and conservatives, but as people, we can make America great again,” Kimmel said. “It starts with us.”

In the spirit of getting along, Kimmel decided to address a long-standing feud with actor Matt Damon.

After taking a few jabs at Damon’s appearance, Kimmel seriously applauded his choice to give Casey Affleck the leading role in the Oscar nominated film “Manchester By The Sea” before calling him a “dumbass.” (At least he tried.)

Once he cleared the air with Damon, Kimmel poked fun at last year’s Oscars

“I want to say thank you to President Trump,” Kimmel said. “Remember last year when it seemed like the Oscars were racist?”

The audience roared in laughter.

RELATED: Meryl Streep is defending herself after a Chanel big wig accused her of ditching their gown for the Oscars

“It has been an amazing year for movies. Black people saved NASA and white people saved jazz. That’s what we call progress,” Kimmel joked.

“Out of all of the nominees, the only happy ending was the one in the middle of ‘Moonlight,'” Kimmel said as the audience booed. “You didn’t watch it, did you?”

“We are very welcoming to outsiders here in Hollywood. We don’t discriminate against actors because of where they come from. We discriminate because of their age and weight,” Kimmel joked and poked fun at Andrew Garfield for losing nearly 40 pounds in preparation of his role in “Silence.”

And no Oscars monologue would be complete without a few jokes about the “overrated” Meryl Streep.

“May I say, from her mediocre early work in ‘The Dear Hunter’ and ‘Out of Africa,’ to her underwhelming performances in ‘Cramer vs. Cramer’ and ‘Sophie’s Choice,’ Meryl Streep has phoned it in for over 50 films in her lackluster career,” Kimmel said as Streep squirmed in her seat. “This is Meryl’s 20th Oscar nomination. Made even more amazing considering the fact that she wasn’t even in a movie this year. We just wrote her name down out of habit.”

Kimmel then encouraged the actress to stand and the audience gave her a round of applause.

“Nice dress, by the way. Is that an Ivanka?” Kimmel quipped.

Kimmel finished the monologue with a final joke about President Trump.

“Some of you will get to stand up here and make a speech that the President of the United States will tweet about in all caps during his 5 a.m. bowel movement tomorrow,” he said.

And, that was just the first 15 minutes! 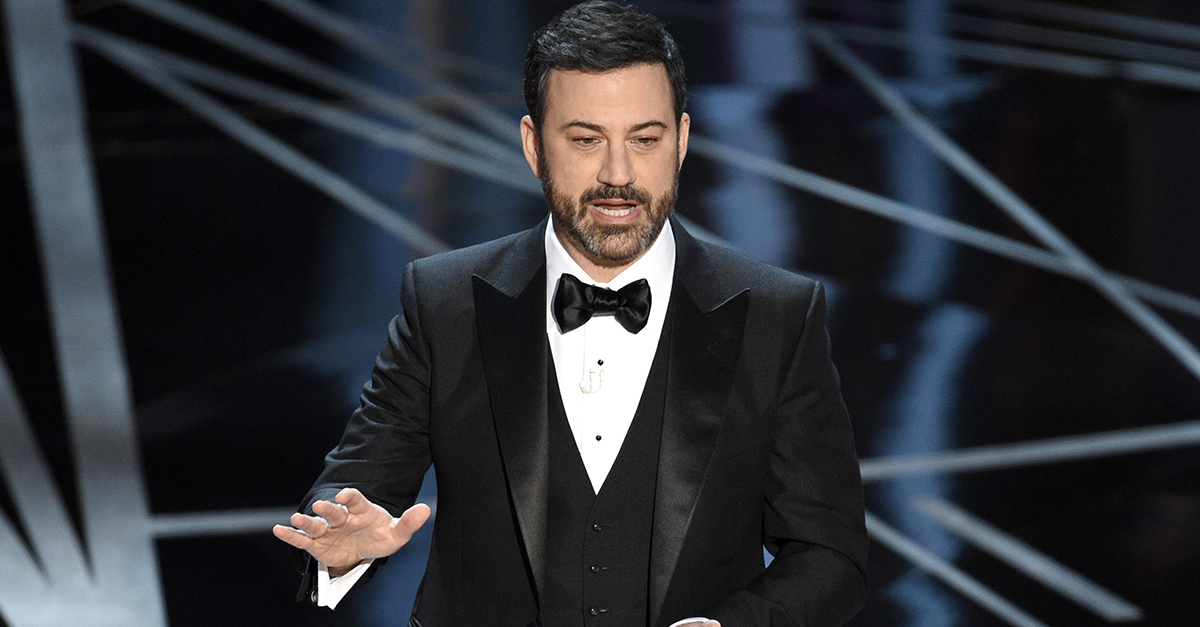