Menu
Follow us
Search
Menu
Search
LONDON, UNITED KINGDOM - JULY 13: Prince Harry, Queen Letizia of Spain, King Felipe of Spain and the Dean of Westminster Dr John Hall stand beside the grave of the Unknown Warrior at Westminster Abbey during a State visit by the King and Queen of Spain on July 13, 2017 in London, United Kingdom. This is the first state visit by the current King Felipe and Queen Letizia, the last being in 1986 with King Juan Carlos and Queen Sofia. (Photo by Francisco Gomez - Pool/Getty Images)

Prince Harry was an excellent and posed host when he escorted the king and queen of Spain to Westminster Abbey.

On Thursday, Harry joined King Felipe and Queen Letizia in a somber ceremony as they paid their respects to those lost in war. King Felipe laid a wreath in tribute at the Grave of the Unknown Warrior.

The royals stood together as they were greeted at the Abbey and told that the unnamed solider was brought from the graves in the battlefield of northern France in 1920, according to PEOPLE. Prayers were also said for Queen Elizabeth II and King Felipe and their governments.

Harry also attended the State Banquet at Buckingham Palace with his family on Wednesday. He reportedly sat with his brother Prince William and sister-in-law Duchess Catherine. Catherine was dripping in jewels and wore Princess Diana’s The Lover’s Knot tiara and earrings. She also wore a diamond and ruby necklace previously worn by Queen Elizabeth II.

The ruby and diamond necklace that the Duchess of Cambridge will be wearing this evening. #SpainStateVisit pic.twitter.com/cbMkWK0jXO

On Wednesday, King Felipe and Queen Letizia joined Queen Elizabeth and Prince Philip for lunch at Buckingham Palace before taking a tour of the Picture Gallery to highlight some of the Royal Collection of items relating to Spain. 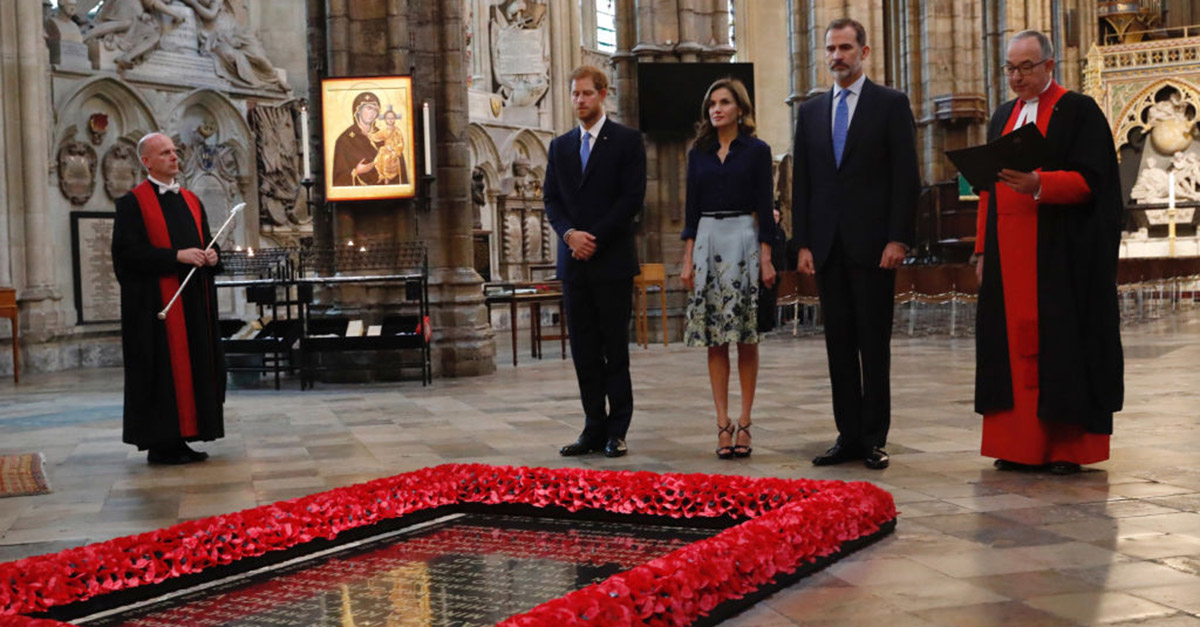